How to Identify the Mature English Hawthorn tree

Learn how to see the smaller, uniquely-shaped leaves, the spotted silvery trunks, and the long, sharp, dark thorns. An important video to see, since the English Hawthorn (Crataegus monogyna) is the easiest hawthorn to find in a forested area. Happy hunting!

How to Dry and Steep Hawthorn Leaves to Make the Tea

Drying and steeping procedures are shown. Steeping time is 14 minutes. Berries are also discussed. August 15 is the Feast of the Assumption, and we are to offer these leaves to the Blessed Virgin Mary on the Monday after her feast day and ask her to bless them. This tea is mild tasting and is meant to help us with respiratory congestion. May Christ our Lord bless you all.

Grandmother English Hawthorn Is a Must-See!

This tree probably was the first planted in this area. English Hawthorn is originally a European native.

Hawthorn in May time

Look for these distinctive flowers in the trees in your neighbourhood woods and hedges and you will have found the best medicinal hawthorn tree!

How to Identify English Hawthorn trees, Part 1, the Baby Tree

This is the first of 2 videos on looking at baby English Hawthorn trees (Crataegus monogyna). Look at the commonalities, such as the leaf shape. Look at the differences with the growth of the thorns. Interesting! The opening photo shows berries that are not yet ripe. They should be red before you pick them for the seeds.

How to Identify English Hawthorn trees, Part 2, the Baby Tree

These little scrappers should be called spear trees! In this very short video, we discover how the side thorns shoot out to become the branches for the tree! Just wondrous! Remember, where the baby trees are, the mama and papa trees will be in the vicinity. The Latin name of English Hawthorn is Cragaegus monogyna.

On the Monday after August 15, (the Feast of the Assumption)! 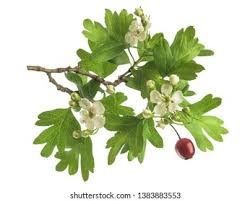 Now is the time to collect the hawthorn leaves and offer them to our Blessed Mother on the Monday after August 15, so that they will heal us from the disease with a burning fire; see prophecy at the end of this post.

Hawthorn grows as a tree or as a bush. Craetagus monogyna (English hawthorn) is the leaf we want for the medicinal tea, but be careful, because there are many other hawthorne trees that you can find throughout North America and the world, and the leaves are usually tooth-like (think of a saw for cutting wood).

The key thing to look for is thorns growing out of branches.

IMPORTANT:  If you are purchasing this medicinal hawthorn tree, remember that it is a deciduous tree, which means it will lose its leaves in the autumn.  Remember, evergreen leaves tend to be poisonous (ex:  rhododendrons).

Please read the prophecy about this:

A Disease with a Blazing Fire

“Grave diseases will arrive, which human craftsmanship will be unable to relieve. Which disease will attack first the heart, then the mind, and at the same time the tongue. That will turn out horrible. The heat accompanying the disease will be a devouring fire, intolerable and so violent that the parts of the body touched with it will be red from an intolerable redness. At the end of seven days, that disease, scattered around like seed in a field, will rapidly grow on every side, realizing immense progressions.

“My children, here is the only remedy with the power of saving you. You know the leaves of the thorns which are growing in almost all the hedges. The leaves of those thorns may arrest the progression of that disease.

“You will pick up the leaves, not the branch. Even dried up, they will retain their efficacy. You place them in boiling water, leaving them for fourteen minutes, keeping the container covered, so that the steam remain inside. From the very start of the attack by the disease, that remedy will have to be used three times a day.

“On the Monday after my Assumption, you will offer those leaves of the thorn-bush to me, and you will pay attentive heed to my words.

“My children, that disease will be strong in Brittany. The thought of God will be much lesser around there . . . the disease will produce a continuous sickness on the stomach, vomiting. If the remedy is taken in too late, the touched parts of the body will turn out black, and through the black part there will be traces turning to pale yellow. (August 5, 1880).”

CRUCIAL: Not All Hawthorns are the Right Medicinal Hawthorn 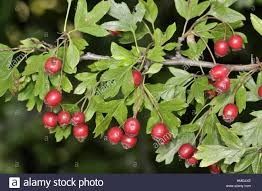 Leaves 2 - 3cm (1in) long, 3 - 7 deep lobes; cut nearly to the midvein; lobes narrow, obscurely toothed; veins running to the notches as well as to the lobes.

Where can I buy English White hawthorn trees?

Can anyone tell me if you can use wild violets or sweet violets? Thank you God bless us all

As long as the Hawthorn is deciduous (has leaves that die every autumn) then you are fine! Hawthorn grows in many places around the world. Look for the thorns now while they are easily visible.

Does it matter which Hawthorn tree/bush leaves you use to make the tea? You listed 12 different types. I live in New York.Thank you

My book on trees says that Black Hawthorn grows in California. The leaves are large ovals. The berries look black (ergo the name). I will pray for you, Irene and Terry.

Hi ... my first time on your website .. I love it!I live in Southern California .. where can I find some trees to buy? Are there any that grow in our weather?

Does anyone know where we can buy hawthorn leaves? This is not a bush that is easily grown in Southeaster Pennsylvania.

Hawthorn trees grow throughout North America and Europe. Very common. You have to look for the thorns. Now is the time, before the leaves come out! Get out there!!!

“Children of Brittany, to preserve your crops, you will make use of what my Son’s bounty has revealed unto you: this is your only means to preserve your food." Could this mean seed collecting?

The Blessed Mother mentions hawthorne leaves. In fact, when we offer these leaves to the Mother of God on the Monday after the Feast of the Assumption, She will bless them.

Can you use hawthorn Supplements at the Nutritional Food Stores?