Pope Gregory XVII and His Successors: The See of the Cross 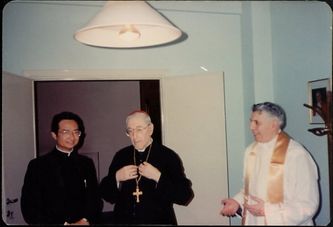 This meeting was not accomplished by chance, but by Divine Providence.

The See of the Cross is the name given to the Papacy in Exile in Marie-Julie Jahenny's prophecies.

The Holy See's exile is a second crucifixion of Christ.

In a state of silent suffering and acceptance of God's Will since 1958, the Pope will triumph with the help of the Great Catholic French Monarch.

The meeting (as shown in the photo above) results in the election of a Successor to Pope Gregory XVII.

The heroic priest Fr. Peter T. is able to locate, and have a clandestine meeting with the Hostage Pope, Gregory XVII- on June 14th, 1988.

Father has several audiences with Pope Gregory XVII, after this initial one.   As he emerges from the meeting with Pope Gregory XVII (where His Holiness has confided to Father that his captors could kill him at anytime).   Father hands his camera to a person who was standing in the room, and asks him to take some quick pictures.

Again, this is right in the heart of enemy territory (i.e. notice the picture of Antipope John Paul II in the upper right corner).   This Monsignor Grone- who poses to the world as one of the Cardinal's household (in fact his official Secretary) - has been just the opposite.   Father relates later that Mgsr. Grone is an enemy of de fide, whose duty it has been to control Gregory XVII.

Grone adamantly tries to stop the picture from being taken. Note the look on his (Grone's) face, and the gestures he is making with his hands!

It is fitting that Pope Gregory XVII presents himself with dignity: he holds his hands to his cassock and stands firm.

As Marie-Julie Jahenny's prophecies tell us:

"Triumph will be magnificent on earth; magnificent will be the coming of the Exiled one to the See of the Cross; magnificent, the triumph of My Brave fighters." (February 9, 1882, p. 203, Prophecies of La Fraudais).  [The French Monarch, a true descendant of King Louis XVI, will come to the Successor of Pope Gregory XVII to be publically crowned as King of France  --Editor.]

"You will not see the end of persecution.  The one who is to replace him will not see either.  The third is going to live a long time; but it will be hard to find him amongst so many destructions." (June 6, 1882, p. 54, ibid).  [This seems to be a reference to the Papacy's struggle to regain the Papal Seat; that is, to come out of Exile.]

"And why, from the depth of your heart, would you not make known those delightful favors?  Why not overflow them into the heart of the new and great Pastor, for whom Heaven is preserving that unspeakable grace of crowning the Exiled one?" (September 26, 1882, p. 199, ibid).

"Under that blessed roof, the faithful apostle will lay his hand upon the head of the one Heaven will have led on a miraculous road.  At that time, it will be difficult to encounter great Pastors, because emptiness will be so extensive, that a large portion of the earth will resemble uninhabited places." (February 9, 1882, p. 199).  [And here is the depiction of the decimation of the Priesthood by our enemies.  Very few true priests are left at the time of the crowning of the French Monarch by Pope Gregory XVII's Successor.]

When will the prophecy take place ?