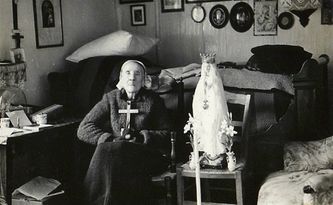 Marie-Julie Jahenny accepted a lifetime of sufferings for Holy Mother Church, and for all of us.

“My dear child, are you willing to accept the five wounds of my Divine Son? . . .  Would you also be willing to suffer, for the rest of your life, for the sake of conversion of sinners? . . .  Here is the cross upon which you are going to be immolated.” (March 15, 1873).

“On that same March 21, at two in the afternoon, for the first time, she suffers the Passion.  She declared she had seen the blood writing, just for herself alone, the following words:

‘Triumph of the Holy Father’

‘Triumph of France’ ['France' is short for the King of France; that is, the French Monarch].*

‘Lack of confidence in Mercy in the days of tribulation.’

* A historical example of calling a monarch by his country's name can be found in Shakespeare's plays, such as:  "...we have here writ to Norway, uncle of young Fortinbras --" (Hamlet, I.ii. 27-8); "Norway himself, with terrible numbers, assisted by that most disloyal traitor,..." (Macbeth, I. ii. 53-55).

Part 1: Who is Marie-Julie Jahenny?

These videos are such a joy, as they relate Marie-Julie's life. What a treasure for all of us who love to hear about her life and her sufferings for us! There are 3 parts (3 videos) in all. This is the first.

Part 2: Who is Marie-Julie Jahenny?

While not done by the editor of this blog, these 3-part videos are a true treasure that will fill your hearts with joy! These videos are a great gift to we who are friends of Marie-Julie--enjoy! This is Part 2.

Part 3: Who is Marie-Julie Jahenny?

Part 3, shown here, is the last of this fine trilogy. While not compiled by the editor of this blog, these videos are, however, recommended for your enjoyment and further education about Marie-Julie Jahenny. Enjoy!