How the Exile Helps Holy Mother Church and Her Children 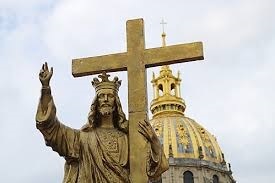 Seen in the sun:

“I see the cause for the delay in the triumph of that despised wound (on Christ’s Shoulder):  at the moment when its proclamation will have been decided, trouble and terror will resound around the Vicar of Christ. At that moment, a suspension will take place for every service. Prayer services will be held in the depths of cellar-vaults, while disorder and murder will pervade the whole inside of the Eternal City.” (April 8, 1880)

As we saw in last week’s post, Christ tells Marie-Julie that he carries the Church into Exile on his wounded shoulder.

Let us consider this wound:  it is inflicted onto Christ’s shoulder by the weight of the Cross.  It is an action of sin, of evil, and so it is “despised.”

That wound’s total triumph however, is obstructed by Christ carrying the Church into Exile. His Divine Action, amidst His expreme Suffering, creates “a delay in the triumph of that despised wound”.

Think of it! Just as the agents of the 1958 takeover launch their attack so that “trouble and terror will resound around the Vicar of Christ”, Christ is able to remove His Vicar through Exile.

What does the Exile do?

First of all, it limits the power of the agents of evil (the masons) to take over Catholic prayer to God Almighty and create sacrilege.

An example of this is how the n.o. has everyone take the communion wafer on their hands, and take it with their own unconsecrated hands to place in their own mouths.

If this were truly the body, blood, soul, and Divinity of Christ our Lord, then everyone who has done so would have committed sacrilege.

Secondly, the Exile serves to protect the Person of the Holy Father, so that papal succession is possible.

Thirdly, the Exile also protects those in communion with the exiled Pontiff.

Being in communion with the true Pope means that one's Faith and soul are blessed through this Divine Connection. For example, one's prayers are heard by Heaven.

While in contrast, those prayers said in union with the excommunicated pretenders, all antipopes from Roncalli to the present-day Mr. B., receive “a suspension [of Divine Action which] will take place for every service” in the masonic (satanic) novus ordo sect.

Where, then, are the prayers that are heard by Almighty God?

They are with the Pontiff and those in Exile with Him, and so True Prayer Services “will be held in the depths of cellar-vaults.”

These prayer services which are hidden from the world by Exile, and are thus figuratively underground, “in the depths of cellar-vaults” are not suspended because they are prayers offered in communion with the Head of the Catholic Church; that is, through the prayers of the Holy Pontiff, the only Catholic on earth upon whom rests the Primacy of Peter, and thus the Divine Action of the Holy Ghost.

And what is left in the visible Vatican City, ruled by satan, once Pope Gregory XVII is pushed into Exile on the first day of His Papacy?

Only “disorder and murder.”

Like a stench that moves through a city, making every citizen ill, the evils of the masonic takeover in leadership (disorder), and the resulting spiritual destructions (murder), “pervade the whole inside of the Eternal City.”

And, of course, from the Vatican City, this demonic infestation moves outward, like seeds being blown by an evil wind, to each diocese and parish around the world.

In this way, the one-world religion of the blasphemous antichrist has its beginning.

Yet, for the blessed children of the exiled Catholic Church, there is hope through daily prayer in communion with the Holy Father for the prophesied Papal Restoration.

Jesus, Mary, and Joseph, save souls!

"We declare, say, define and proclaim to every human creature that they by necessity for salvation are entirely subject to the Roman Pontiff ." - Decree of Pope Boniface VIII, Unam Sanctam,Nov. 18, 1302, ex cathedra