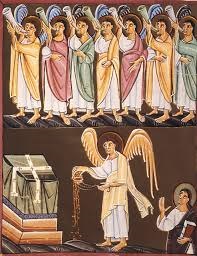 The Seven Trumpets of the Divine Chastisement

I have wanted, says the Lord, to show the beginning of the Chastisement, but it has been too little recognized and meditated upon. I am going to join it with other indications which no one will be able to deny, except the disbelieving who never believe in anything, and who live like animals.

Satan leaps from fury and says:

--Since God comes to manifest the ends of that which He has begun with works and with gifts, I will revenge myself on all that I am able. I will stop those who untangle the difficulty of the road to enter here; I will have traps on all the passages (ways); I will overthrow them; I will utilize, in order to give them a thrashing, all the instruments of my hell.

[Marie-Julie says:] --Satan, you are beaten. It is for this reason that you revenge yourself.

--(in his fury) I will come day and night; I will make horrible carnage; I will throw stones and I will break the glazing.

--Satan, you are beaten. The light is upon us and already its flame is apparent.

--I will make those who work in this place afraid, who are regarded like princes and advocates. Pretty honour!

--Satan, you are beaten by their devotions and their courage. Your rage exhausts itself with threats...

--(in his fury) I will strike down all those who wear black robes, even in your cave. I will make to change the people of Faith and of confidence. I will give them unknown names. In the middle of a crowd assembled, I will show myself king and powerful...

And Satan, foaming, says in a voice which “lowers itself down”:

--Remove yourself and go fry in your hell!

--I am going to begin my efforts again, and until the end, treat you with dreadful words.

--I am not afraid of you, villainous beast, remove yourself.

The key of this prophecy is at its beginning, with the first sentence. Recall that the year is1882:

“I have wanted, says the Lord, to show the beginning of the Chastisement, but it has been too little recognized and meditated upon.”

Most interesting! So what have Catholics not recognized?

What event began the Divine Chastisement that we are still living (and which, in the end, will purge the world of the wicked during the 3 Days of Darkness)?

By 1882, when Marie-Julie has this vision, the French Revolution has already occurred, almost 100 years previously (1789-1799). This revolution begins the now-historical chain of events which are the masonic plottings to remove God's Church, the Catholic Church, and God, from the minds and hearts of mankind.

This week, on www.tcwblog.com there is a must-read editorial written by His Holiness, Pope Gregory XVII, in 1970, which provides wondrous spiritual guidance for all of us regarding the satanic persecutions which we have been battling for so long. In part, His Holiness explains:

“When one hundred years ago the temporal power fell, the Pope seemed like a prisoner. "The end of the Papacy," screamed the modest means of social communications of that time. [Rennovatio VI,1970].

This taking of the Papal States, and the imprisonment of the Holy Father, Pope Pius IX, surely was the first of those “other indications [of the Chastisement] which no one will be able to deny, except the disbelieving who never believe in anything, and who live like animals.”

God's Love for us is so patient, His actions are so slow, including His Chastisement, that the devil cannot stand it. In his jealousy, he rages about God's “works” and “gifts” to mankind.

The devil tells Marie-Julie that he will “revenge [himself] on all that [he is] able. [That he] will stop those who untangle the difficulty of the road to enter here;”

Where does he want to stop us from entering?

There are two possibilities.

It could be that the devil wants to stop souls from getting to Brittany, to stop them from surviving after the 3 Days of Darkness, or it could mean that he means to stop souls from finding the Church in Exile, outside of which there is no salvation.

Certainly, the devil means to entice us into being damned, like himself, and so he threatens to “have traps on all the passages (ways); [saying that he] will overthrow [us]; [that he] will utilize, in order to give [us] a thrashing, all the instruments of [his] hell.”

This gives us pause to think: How horrible are those instruments of hell! We know what his attacks are, how they aim to rip peace from our hearts, minds, and souls. The recent rash of suicides worldwide is witness to this thrashing from hell. But how horrible for the souls of the damned, to have an eternity of such grief, such turmoil. Who would wish this even on their worst enemy?!

As Marie-Julie hears the devil's threats, and responds to him, we see in her a true soldier of Christ. We see how we need to be: strong, never giving the little pig an inch, determined to fight the good fight for ourselves and for others.

She counters his every evil threat with his imminent defeat, pointing out the Truth that he is already beaten, pointing to how his time is quickly ending:

“The light is upon us and already its flame is apparent.” -- Perhaps Marie-Julie refers to seeing Christ's return?

Then she reveals an IMPORTANT TRUTH when she tells the devil that he is “beaten by [our] devotions and [our] courage.”

How can they possibly hope to battle the devil?

The truth is that souls have to come into communion with the one Papal Line, with the True Successor of Saint Peter, Pope Gregorius XVIII, in order to receive valid and licit Sacraments; that is, Sacraments which are Holy, which give the recipient spiritual life!

The devil knows that there are no graces from false sacraments; that is, supposed sacraments received outside of communion with the Holy Father.

So the devil's plan is to attack the priesthood first. This is why he tells Marie-Julie that he will “strike down all those who wear black robes” (that is, the Priests, because they alone wear the black soutane or cassock).

He next threatens to “make to change the people of Faith and of confidence.” This must surely be why television and the movies have been invented, because of how quickly they can make most people think in the same way (a beehive mentality, as it is now called).

He will rule over the masonic V2 council led by antipopes Roncalli and Montini: “In the middle of a crowd assembled, I will show myself king and powerful...”

Again, the devil's aim is to deceive millions of Catholics so that they are led out of communion with the Holy Father and into perdition, where he resides.

The devil delights in speaking of the fallen priests. He defines them as those who seemingly love their attachments to earthly lures, with the image of a priest who taps his shoe along to a song as the “beats of the sole”.

Priests are to be spiritual healers and teachers. But the priests who are attached to the world become the “forerunners of [deceptive] doctrines”. These bad priests are termed those “of the hollow 'careers' ”, meaning that they look to benefit themselves rather than to save souls.

These bad priests are evil, “ of the crows” and also destroyers of souls, “of the shredders of my reign.”

These words cut into Marie-Julie's heart, since she is beginning to experience attacks from some of these priests, and so she becomes upset, yelling out, “Remove yourself and go fry in your hell!”

Marie-Julie is a good Catholic. She loves the Priesthood. In them she knows Christ.

This long time of Chastisement is a serious time, and Marie-Julie knows it because she is beginning to experience the demonic persecutions from bad priests, and because she is being shown the Popes in Exile and how hard it will be to find the Catholic Church on this earth during the Church's Exile of Silence.

Holy Mother Church is here on Earth, now and always, but how do we convince souls who have accepted the demonic lies of their Sunday pseudo-sacraments?

May God remove the deception soon, so that they do not die outside the Church.

Blessed be Saint Peter, Prince of the Apostles!