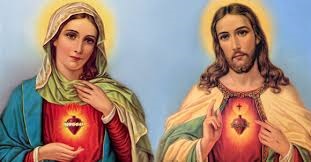 The promised Ark of our Protection:  The Sacred Hearts of Jesus and Mary

The Lord places on his cloak, at his chest, three nails suspended by three trickles of blood, each one more beautiful than the last. He tells me:

“Listen now. Here is the division [into three parts] which has been very visibly discerned. I leave it on my clothing of Glory, so that all of my Angels see them, and that the eyes of my Elect, whom I want to invite to accompany Me from Heaven to Earth, be dazzled by them. I place them [the three nails] there for them to admire; afterwards I will offer them to you.

“I am going to explain the meaning of these three connections to the Precious Trickle [of the Precious Blood]:

The first I give you, for my people, the gift of past prophecies on what is to befall the world, up to the age -- far from now -- of the end of centuries.

With the second, I give you to prophesy on the reign of the kings of the universe, and on the New Reign which will begin in peace, after the trial, and which will not be troubled until the penultimate times which affect the end of the world.

With the third, you will receive all my orders. On this place I will write the hour where my servants should direct themselves, for my glory, on the earth, where laments the Martyr of the Church [the Pope].

Today, as in the times of Jesus, the Lord has sent grave warnings around the world. More than ever, He has presented to His people the brilliance of His Justice and His Mercy. He warns that the present times walk on the last path, soon to break, and so it works quickly in these announcements.

The Lord has availed himself of His servant [Marie-Julie] to warn His people of frightful darkness. At the time of their first revelations, it was seen as well then as today. What is added is frightening.

At that time, the sky must bring its warnings. The other servant of the Holy Virgin, on the mountain [Melanie of La Salette*] lies on the Cross, in the middle of tortures, in order to suck deeply the pain which reaches, almost already, the “Place of the Faith” [the Pope -- see this definition on page 10 of this book]. In the chains of these pains, she repeats:

“Lord, what will happen to he who governs Thy Church?”

“Pray, My children, pray, pray; there is no other remedy; there is no other hope. Until, through thick and sombre clouds, this luminary, a light of hope to him, if it is going to extend itself for he who prepares himself. The world takes a step closer to the abyss, a step with no return: all deepens itself for the days of pains, days made long by their intolerable evils, made long by their dreadful fright and the destruction of the people. This kingdom will only keep one handful of the world planted so far away, that the whistles of the strongest voices will not be able to hear it on this earth of desolation.    As their Ark of Protection, the Just will have the Hearts of Jesus and Mary.

Words of the sad Flame of the Holy Ghost.

*Fr. Roberdel adds the footnote:  “Without a doubt Melanie of LaSalette.”

Reflection on these two Prophecies:

Father Roberdel has placed these two prophecies together, since they closely relate to the topic of the announcement of a new reign; that is, a reign “which will begin in peace, after the trial, and which will not be troubled until the penultimate times which affect the end of the world.”

The first prophecy begins with three gifts for Holy Mother Church, symbolized by the three nails which crucified our Lord. Each is suspended by a trickle of His Precious Blood.

The first is “the gift of past prophecies on what is to befall the world, up to the age ... of the end of centuries.”

Prophecies are consoling, because they assure us that all is permitted by God, that we are in His Hands, and so this gift is beautiful.

But the second gift is even more beautiful:

He gives us Marie-Julie Jahenny to “prophesy on the reign of the kings of the universe, and on the New Reign which will begin in peace, after the trial”.

This will be a beautiful time, a joyful time to be alive; but the third gift is to be the most beautiful gift of all:

There seems to be a mystical call for the Faithful to step forward and gather, for God’s glory, with the exiled Pope: “you will receive all my orders. On this place I will write the hour where my servants should direct themselves, for my glory, on the earth, where laments the Martyr of the Church [the Pope].”

We, his faithful children, will gather around Him and the Holy Father will no longer lament! Through such a powerful and visible witness, the Holy Ghost will surely convince the sheep that have been led out of the sheepfold that there is indeed one shepherd and one sheepfold, outside of which there is no salvation.

The second prophecy takes us to the time of the punishments themselves. Christ has given us “grave warnings” through his prophets, but he has also “presented to His people the brilliance of His Justice and His Mercy. He warns that the present times walk on the last path, [and are] soon to break”.

There will be a “frightful darkness” which will be manifested in “the sky [which] must bring its warnings”. The Holy Father [Pope Gregory XVII] suffers in this darkness, and, in her lifetime, the victim on the mountain [Melanie of LaSalette] suffers for the Holy Father [Pope Gregory XVII] and asks God, “Lord, what will happen to he who governs Thy Church?”

From this, we can see that this darkness is metaphorical:  a long-suffered darkness, a darkness when the Holy Father is, in his exile, unable to act as the Pope of His people.

This darkness is also defined as the pain: “which reaches . . . the “Place of the Faith”, which is the Papacy, since it is from the Papacy that Priests and Prelates get their priestly Holy Orders, and through which flow the graces of the Holy Sacraments, the only Sacraments which can give us spiritual life.

And we, the faithful, are told what part we must take at this time (the current time that we are living through):

Already in Marie-Julie’s time the Church and the world was walking towards this time of the Silent Exile, taking “a step with no return: all deepens itself for the days of pains, days made long by their intolerable evils, made long by their dreadful fright and the destruction of the people.”

This is what has indeed happened, yes?

But God protects His Own! In the midst of this destruction and resulting desolation there is, as in the time of Noah, an ark for the salvation of the Church:

“As their Ark of Protection, the Just will have the Hearts of Jesus and Mary.”

Here in these two Hearts, so full of fervent love for us and all mankind, we can find our fortitude to carry on, our receptacles to place those tears that refuse to be shed because we will fight on, no matter what, until our last breaths.

The Sacred Hearts of Jesus and Mary know our frustrations, and our battles. They know that we suffer as much (if not more) from our own failings and weaknesses as we do at the hands of Christ’s enemies.

If we place all of our trust in the Sacred Hearts of Jesus and Mary, we will conquer our enemies on all fronts. We will not be refused when it is time to make our final humble offering of ourselves.

As the Holy Ghost told Marie-Julie Jahenny that we must pray, pray, and pray, let us pray first of all for the Holy Father:

Prayer for the Sovereign Pontiff

Lord Jesus, shelter our Holy Father the Pope under the protection of Thy Sacred Heart. Be Thou his light, his strength and his consolation.

V. Let us pray for our Pontiff Gregory XVIII

R. The Lord preserve him and give him life, and make him blessed upon the earth, and deliver him up not to the will of his enemies.

Prayer:  O Lord, we are the millions of believers, humbly kneeling at thy feet and begging Thee to preserve, defend and save the Sovereign Pontiff for many years. He is the Father of the great fellowship of souls and our Father as well. On this day as on every other day, he is praying for us also and is offering unto Thee, with holy fervor, the Sacred Victim of love and peace.

Wherefore O Lord, turn Thyself toward us with eyes of pity; for we are now, as it were, forgetful of ourselves, and are praying above all for him. Do Thou unite our prayers with his and receive them into the bosom of Thine infinite Mercy, as a sweet savor of active and fruitful charity, whereby the children are united in the Church to their Father. All that he asks of Thee this day, we too ask it of Thee in union with him.

Whether he weeps or rejoices, whether he hopes or offers himself as a victim of charity for his people, we desire to be united with him; nay more, we desire that the cry of our hearts should be made one with his. Of Thy great Mercy, grant O Lord, that not one of us may be far from his mind and his heart in the hour that he prays and he offers unto Thee the Sacrifice of Thy Blessed Son. At the moment when our venerable High Priest, holding in His hands the very Body of Jesus Christ, shall say to the people over the Chalice of Benediction these words:  “The peace of the Lord be with you always,” grant O Lord, that Thy sweet peace may come down upon our hearts and upon all the nations with new and manifest power. Amen.

Links:  The See of the Cross    French Monarch    LA SALETTE