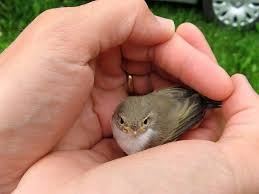 God has a place already set aside for us, a place that is lush and temperate of climate: Brittany!

Saint Michael, dressed again in his clothes of glory, is shining in gold. I hear above my head a group of birds. Their language is sad. I seem to recognize the melody of the canticle of death.

“Victim of the Cross,” says the Archangel, “these birds are a very sad omen.”

--“[You have checked my] queen! Saint Michael, I do not know that word.”

The birds seem surprised to hear the voice of the Holy Archangel. Only two seem to want to talk.

“Tell us your secrets,” Saint Michael continues, “tell us what sends you here.”

--We come from the power of God.

“Why do you wear these rings on your feet?”

One of the birds opens the ring and shows what is written. Saint Michael takes it and makes me see it. I read easily:

“This is the year of the predestination of France, if she makes an effort to give me her heart.”

“Poor first-born daughter of the Church and of the Holy Virgin, will you have the courage to make such an effort?”

The bird lowers its head and hides its beak under its plumage.

“Bird,” says the Archangel, “show us your eyes. Take your head from under your wings.”

The bird obeys and I see tears flow from its eyes.

“Victim of the Cross,” continues Saint Michael, “I tell you highly that, without the aid of God, all is already lost:  there is no hope…”

“Lord, mark with Thy abundant blessings the people who love Thee and who want to follow Thee. Small flock of the Lord, you will soon have where to spread out widely upon the earth. This one [France] will be depopulated of the impious, she will be purged of ungrateful sinners, and will leave a large expanse to the little flock of the Lord.”

In this conversation with Saint Michael the Archangel, we learn of how God can use birds as messengers, and also as a figure for France:

Marie-Julie seems to be taken spiritually outdoors, for she hears a group of birds sadly singing above her head and she “recognize[s] the melody of the canticle of death.”

Saint Michael teaches Marie-Julie that these birds are a sign from God, “a very sad omen.”

Marie-Julie, being a simple country girl does not know this word "omen", so she uses the chess phrase "you have checked my queen" to let Saint Michael know, in a friendly way, that she does not understand.

Saint Michael tells her that little birds can relay messages from God; that is, that they “speak from God.”

These birds are low in the hierarchy of God’s creation, for they “seem surprised to hear the voice of the Holy Archangel.” Yet they recognize the Prince of the Church’s voice, but being lowly creatures in comparison, only two of them dare to speak to the mightiest of all the Angels.

Saint Michael orders the birds, and they reveal that they “come from the power of God.”

Saint Michael then asks about the rings around their feet, and, indeed, one ring is opened to reveal a message from God Almighty which Saint Michael shows to Marie-Julie.

And why does Marie-Julie say that she can read the message easily? Because Marie-Julie was illiterate, but during her ecstasies she could read easily.

In this prophecy, the bird’s message seems one of hope:

“This is the year of the predestination of France, if she makes an effort to give Me her heart.”

And since the birds have revealed that they come from the power of God, Saint Michael addresses the bird with the ring as the country of France itself, saying:

“Poor first-born daughter of the Church and of the Holy Virgin, will you have the courage to make such an effort?”

This bird hides in its shame, it “lowers its head and hides its beak under its plumage.”

Saint Michael orders it to lift its head, and Marie-Julie sees that it is crying.

The Archangel then addresses himself to Marie-Julie, saying that “without the aid of God, all is already lost:  there is no hope…”

Why? Why is France’s only hope to have the direct aid of God?

And then, addressing God, the Archangel Saint Michael gives us hope with this plea on behalf of all of us:

“Lord, mark with Thy abundant blessings the people who love Thee and who want to follow Thee.”

These are the people who Saint Michael calls the “small flock of the Lord.”

Oh, may we belong to this small flock!

Christ is the Good Shepherd, and His Sacred Heart has promised to take care of his faithful children. After the Three Days of Darkness, we will have room to spread out!

Saint Michael the Archangel assures Marie-Julie of this fact when he reveals that “[t]his one [France] will be depopulated of the impious, she will be purged of ungrateful sinners, and will leave a large expanse to the little flock of the Lord.”

Brittany! This large expanse which has been set aside for us, and in which we are to continue living after the catastrophic darkness, is Brittany! It may look small on a world map, but the land area is large on a human scale.

It has been prophesied that there will be a separate sunbeam shining upon Brittany, keeping her warm, while the rest of the world freezes.

Brittany has a rich Catholic past, thanks to the Irish Saints (holy monks, priests, and bishops) who came to convert souls in this part of France. Interestingly, even in our current times of apostasy from the Catholic Faith, Brittany is considered the most Catholic part of France.

Brittany will be our home in the future because God wills it.

Please note that recent research from a reader has revealed that St. John's Wort is NOT the same as St. John's Ivy (also known as St. John's grass). It is always safest to search online by the botanical names of the plants recommeded to Marie-Julie Jahenny as having healing properties for the coming plagues and diseases.  Please see the red link "Remedies" below. Also, the violets recommended for headaches are NOT African violets! Please see the new photos, also in the "Remedies" link below:

LINKS:  Map    Getting to Brittany   Remedies