The Hour Will Sound 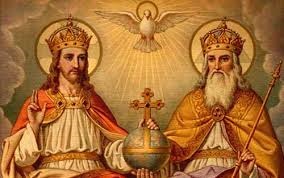 "... [H]ere is the moment when, with My Father, I decide the hour a thousand times desired by My children..."

“My well-beloved Son, I return Your call. It is a small number of men who, alone, glorify You and remain faithful to You. The more time is prolonged, the more evil worsens.”

“My Father, it is, for Me, a great sorrow to have to punish My people so promptly.”

“My Son, how many times have the warnings from Heaven been told to faithful Christians and to those who are without loyalty to be careful!”

The Good Mother steps and says to Her Jesus:

“My Son, postpone again the blows of Your Justice.”

“My Son,” resumes the Heavenly Father, “take the rays of the sun from the earth! Send the obscure days! That this darkness be a further warning for this blind people.”

“I have come down here,” says Jesus, “for My friends, with the aim to console them and to spare them agitation at the approach of the great days. I have pity on My children; they will not perish. Each day, nevertheless, they have to carry multiplied crosses. But may they be reassured!

“I will protect them, because I want them to be the first to proclaim the glory of the triumph when the Great Events have passed.”      (20 September 1877)

Reflections on this prophecy :

This prophecy clearly shows the roles of God the Father, God the Son, and the Blessed Virgin Mary.

God the Father, in His Justice, wants to begin the punishments upon the earth immediately, because the souls who mock God are not repenting of their sins, and “[t]he more that time is prolonged, the more that evil worsens.”

God the Son’s role is to punish the world. He says: “[W]ith My Father, I decide the hour”, but His role is to also carry out His Father’s wishes: “My Father, I am at your orders: command, I obey.”

We see here that, in His Mercy, Christ wants to extend the time before the Divine Punishments, so that His children are more prepared: “My Father, it is, for Me, a great sorrow to have to punish My people so promptly.”

The Virgin Mary, speaking to Christ her Son, has the role of intermediary for the people. She is the Mediatrix of all Graces, and here we see how our Blessed Mother obtains favours for us: she steps forward and quietly asks her Son to grant her wishes: “My Son, postpone again the blows of Your Justice.”

This prophecy also allows us to reflect on the importance of this postponement to the Church and to our own lives.

For instance, we know that the masons had so many agents in high places at this time that only the power to veto the election, held by the Chamberlain (a position since done away with) allowed the naming of Cardinal Sarto to be Pope. Cardinal Sarto (Pope Saint Pius ) would have never been Pope except for this bold, legal, and inspired intervention.

Pope St. Pius X’s intelligence in dealing with the masonic agents who would, as cardinals, elect His Successor, is noteworthy. To ensure the continuation of the papal line, he wrote a most important rule for the conclave that would elect His Successor: that He, as Pope, was lifting all excommunications (censures) from the voting cardinals until after the election for the Successor was made.

Because this rule was made during his life as Pope, this post-mortem Papal Authority to bind and to loose was binding, and it ensured that the Holy Ghost could come into the souls of these enemies of Holy Mother Church, and influence their voting. And it did.

In fact, Pope Pius XII used the SAME conclave rules as those written by Pope Saint Pius X. Thus, history can understand how Cardinal Siri was elected and then, once the censures were back in place in the souls of the voting cardinals, he was later rejected.

To get back to our reflection on the impact on all of us if the papacy had been overtaken at the time of Pope Saint Pius X’s election, 1903, we have to wonder if we would have been born at all!

For instance, would our parents have been among those who fell from the Faith and used contraception or even abortion? This is certainly what we see commonly in practice today!

As of this October 2018, it will be exactly 60 years since the Silent Exile of the Pope and the Church. As we can see from the quick, partial list below, the destructions have been vast:

--the ordaining of priests and the consecration of bishops have been nullified.

--the Holy Sacrifice of the Mass and the other sacraments have been nullified (and even marriage, in some cases).

--devotions, hymns, and prayers have been removed from usage or changed.

--the Holy Rosary has been ADDED to!?! (This insinuates that the Blessed Mother did not even know which parts of her Son’s life should be meditated on!)

--the Stations of the Cross and the observations around the time of Lent have been changed, the Rogation Days have been removed from the seasons.

--laws on fasting and abstinence have been removed or changed.

--the Catechisms, the Canon Laws, the Catholic Encyclopedia have all been changed.

--the regulatory bodies of worldwide media have been stopped: cinema, books, magazines, etc.

--false churches have been allowed to put up signage, advertise, and spread their false beliefs around the world. Even the church of satan is officially recognized and donations are considered tax deductible!

--evils have multiplied around the world: materialism (money) is the universal focus of mankind; “Catholic” schools do not teach Catholicism; the State dictates to all; laws have been enacted which make it illegal to criticize false beliefs, and sodomy; tattoos and piercings are the markings which people choose to have put upon themselves; babies are continuously being murdered before or during their births—surely, this is a satanic blood sacrifice--; infants and children are being abused (whether sold into a hellish satanic slavery or stolen); the sick and old are being murdered (euthanized); suicides are gaining popularity as a legal “right”; courts of justice are no longer Just, and perpetrators of crimes are given more rights and privileges than the victims of crimes; the lying media and the allures of technology have stolen the minds and hearts of our youth—ironically, they like to watch ‘zombie’ shows, not realizing that they and their parents are truly spiritually dead; in fact, zombies.

--The number of people who can still see the Truth is small, oh so very small, and the good suffer very much, and often.

May the Sacred Hearts of Jesus and Mary be with us now and at the hour of our deaths. May we live and die as children of Holy Mother Church!

(Please note: there is a new video on how to dry the hawthorn leaves and make the tea).