A Regime of Popular Democracy 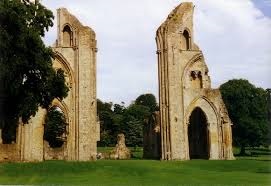 There has been a two-fold aim on the part of the "popular democracy" of today: the destruction of Catholic Monarchies and of the Catholic Church.

Pictured above are the ruins of Glastonbury Abbey, burned down in 1539 under the orders of King Henry VIII. English subjects who remained loyal to the Pope were severely punished, and sometimes martyred as "traitors". Indeed, the abbot was executed prior to this abbey's destruction. There is written testimony that the religious of these targeted monasteries and convents would be burned inside during the nighttime raids.

“Very little time is left, says the Flame of the Holy Spirit, before the evil freedom be ruling fully on this earth, the inhabitants of which will be trembling from the shiverings of death.

“I am addressing the three souls present here, under God’s gaze, and I warn them in a loud and resounding voice: the poor parish which is yours, My children, has only a very short time to remain, as it does at present, under the dominion of faith.

“Here, a law is going to report victory, which will be extended to the whole country land of this kingdom. Not many places where religion is still taught, considerable rebellions will take place on the part of the population, against the passing of that Hell’s law.

“On this side of the righteous one there will be a difficulty to be submissive to the employees and allies to legislators, to those who will occupy positions of power. That will be a terrible struggle between both parties; and men of the law will take advantage of it to make other burdens heavier on the people who will be opposing their purposes.

“The hour is not far off for it. Everything is pointing it out rather well; but there is no need of complaining about those diabolical laws, already at present time. A little more time, very little, and then they may complain. But no ear will be left to hear their cries; no heart to be compassionate on their heart-rending anguish. The law will get into all freedoms and will step upon everything which is the most sacred.”

“Dear God’s friends, this will take place quick and everywhere, without any exception. When that law will be everywhere in its free fulfilment, the wicked government will seek and find some watchmen, after its own fashion, and all of the same mind, on its own side.

“Not only will children be watched, but no family will have a right on the least understanding any more from those men of law; nothing will move them, no unfortunate fate.

“Everything will get under their will. The lower classes will be quite exposed to lose, on earth, everything that will prove necessary. Which will be the ruin of a large number of families. If, through a divine permission, a father or a mother get sick, an understanding will have taken place not to keep them, unless one appears in a court of justice.

“Dear God’s friends, as soon as the whole of France will stand under such a law, only one week will be spent before the war against the Church and the people. I summarize all of it within three months before the big blast to take place; which I will call the war of blood. These three months will be the prelude, before the great entrance to what shall be the greatest misfortune the world will have known of.”

The Commissaries of the People

“Resting on the shoulders of the people who will be quite unhappy, there will be the undeniable burdens of abominations from which they will be unable to protect themselves. They will have to obey.

“In every place and city in France, the law-makers will appoint a host of watchmen: from ten to fifteen men. From six to eight in small regions and still fewer in very exiguous places. The whole people will have to submit to such a watching or else to endure imprisonment and finish their lives under trenchant weapons. Such will be the great days of the great freedom!

“That infamous law will come out together with a large number of others. Nobody will be able to withdraw from them… or else death in the dark depth of prisons!”

“In all religious houses which will not yet have been delivered to the legislators, cruelty, and previous to their devastation and desertion, they will come to scrutinize them, taking an account of everything even to the most remote corners. In all those poor houses, no security will be left at home.

“After hardly six or nine weeks of that regime of apparent perquisitions, crime will be fulfilled upon small houses just like upon the bigger ones. No religious house will be left in France: each of them will be left under the roof of the sky…”

This week’s prophecy deals with some diabolical future events, and some situations which we are already living, or beginning to live, today:

The Papacy and the Monarchies have been attacked and pushed aside. In their place, diabolical "democracies" have taken over the lives of all of us.

We are living in this Hell’s Law now: “evil freedom will be ruling fully on this earth.” The sins are extolled as choices, and even virtues, with the idea that people are born the way they are, that it is natural and not an abnormal behaviour, a depravity of sin: “The law will get into all freedoms and will step upon everything which is the most sacred.”

The next phase is probably in place now, but will become more obvious, more tyrannical, in these years: “the wicked government will seek and find some watchmen”.  Families will no longer have rights as these watchers “Not only will children be watched, but no family will have a right.” If a parent gets ill with a chronic condition (it is understood), then the children will be removed from the home.

There will also be a destruction of the finances of most people by the elites: “The lower classes will be quite exposed to lose, on earth, everything that will prove necessary. Which will be the ruin of a large number of families.”

We need not distress about this, however, since we stand to lose all with the implementation of the mark of the beast by the anti-christ.

Already the justice systems around the world are corrupt, with masonic (immoral and controlled men) sitting as judges: “Justice tribunals will be changed into un-justice tribunals.”

And the devil has already attempted to destroy Christ’s Church, the Holy Catholic Church, with the exile of the Holy Father. This has been “the war against the Church and the people… which I will call the war of blood. [It has been] the prelude, before the great entrance to what [is] the greatest misfortune the world [has] known of.” What is this misfortune? The exile of the Papacy.

With the pushing aside of the Successor of Saint Peter, He who has received the power to bind and to loose on Earth and in Heaven, and the pushing aside also of truly Catholic Cardinals, His Hierarchy, the lambs have been left to fend for themselves.

And so, this is why all evil results are left “[r]esting on the shoulders of the people”. The shepherd has been silenced and is no longer there to visibly defend us from the attacks of the wolves.

We the good people who wish to follow God’s Laws because we love Him and we want to go to Heaven when we die, are left suffering. People “will be quite unhappy, there will be the undeniable burdens of abominations from which they will be unable to protect themselves. They will have to obey.” We will have to obey if we want to keep our jobs which allow us to eat and have a roof over our heads.

However, when we are forced to obey then we are not giving our full consent, and, not being free to act of our own will, we cannot be judged. That would not be Just, according to Saint Thomas Aquinas. Think of Pope Gregory XVII, who was forced to act as if all was normal, as if he was just another cardinal, even kneeling before each of the anti-popes shortly after their “naming”.

Even the treasury of the Church, Her religious houses, where victim souls offered their prayers and sufferings for mankind, are attacked and laid to waste: “No religious house will be left in France: each of them will be left under the roof of the sky…”  This final image tells us that the true religious will flee rather than go with the diabolical changes.

In my own family, two elderly cloistered religious, both sisters by blood and by religious vocation, converted from Protestantism, were left with no choice but to leave their convent when faced with the enforced change to their religious habits and their way of life. These sisters lived out their lives quietly, in accordance to their cloistered Rule, in a small apartment, with a female cousin to act as their Extern, bringing them all necessary foodstuffs and such.

This is what I think of when I read of the apparitions of the Blessed Virgin Mary where she speaks of the decaying flowers in the convents. Monks and nuns, brothers and sisters, all suffered this same persecution to their vows to follow their Rules.

Let us pray to these deceased martyrs to help us to fight the injustices with wisdom, so that we may not accept evil in our hearts, nor lead others into diabolical error.

We must endeavour to battle this evil worldwide power, so as to gain Heaven.

May God empower the French Monarch to liberate us from this heinous worldwide rule!

May the Virgin Mary, our Good Mother, intercede for each of us. Amen.