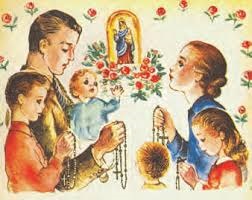 Our Holy Mother said that She would save souls through the praying of the Holy Rosary and the wearing of the Brown Scapular.

“The triumph of the living will be beautiful,” says Saint Michael, “when Holy Church, surrounded with thorns at present, will be seen circled with a crown of golden lilies.”

“I will stock France with fresh flowers when the flood of My Just Chastisements will have passed away,” Divine Jesus added.

He imparts His blessing unto France and tells her.

“I will send Saint Michael over, the Prince of Victory, to bring the Lily to the bolster of your head… From day to day, you will see how I will reconcile with you, according to the extent it will blossom little by little… I will come to visit you and raise you by Myself.”

France is moved and reassured. The thorns cropped off to be placed in its tomb, are put back to the field. The place of the tomb is left without thorns. I hear Saint Michael.

“How much I rejoice,” he cries out; “here comes the moment for fighting against Hell whose rage is more red-hot than burning coals. But do not be afraid of anything, because you are the fighters for a good cause. Double your prayers for the sinner’s and the blind’s sake. The whistling of Hell’s monsters will soon be heard from one end of France to the other. Civil agitation…”

Marie-Julie is more and more frightened. She stops, whispering: “I do not understand.”

The Immaculate Mother bursts out in more bitter tears, disconsolate at the thought of so many souls being lost, whose ransom had cost so much.

“Beloved Mother,” says Her Son, “an end must be put to evil. If I were to delay further, all souls would be lost. It is necessary for My Holy Church to report triumph. How many times did you not give warning to France, your beloved Daughter! Why did she always choke your voice?”  (September 18, 1877)

“The triumph of the living” will come perhaps any day now! Think of it! Pray for it! Look inside your hearts, where the light of Faith shines, and you will know that it is true!

Saint Michael calls this victory “beautiful”. For an Angel of God to describe it this way, we know that it must be a holy triumph; that is, the triumph of the Vicar of Christ and the Church.

This “triumph of the living” does not happen until the suffering of the Church is over.

As Saint Michael refers to present-day sufferings; that is, in 1877, what sufferings are of significance?

Indeed, there are many, for Saint Michael describes Holy Mother Church as being “surrounded with thorns”.

How? The time of this prophecy is approximately five months before the death of Pope Pius IX (7 February 1878). The Papal States have been stolen, leaving the Papacy much poorer. Masonic thinking is beginning to influence people. For example, Vatican Council I’s solemn declaration on Papal Infallibility when the Pope speaks on matters of the Faith and Morals, (known as ex-cathedra statements) is being viciously attacked at this time.

So there have always been persecutions since the Church’s inception, but none so detrimental to souls as this great Chastisement, this Silent Exile, which will see its 60th anniversary on October 26, 2018. Our enemies will rejoice on this day, their minds deluded by the demons, but we will beg Christ our Lord to end this detrimental condition for the countless souls worldwide.

The Church must first come out of this Silent Exile.

She (the Bride of Christ) must lead the way, for Her Head is the Pope, the Vicar of Christ, from whom all graces flow.

French monarchs have historically always protected the Papacy. This strong protection is one of the reasons why France is called the eldest daughter of the Church.

As has been previously prophesied by Marie-Julie Jahenny and other Catholic visionaries, France will return to a monarchy, and this Monarch will recognize the rights of the Papacy.

The symbol of the French kings has always been the lilies, called “fleur de lis” in French.

In this way, the support of the French kings leads to the image of the Church as being “circled with a crown of golden lilies”.

And why are the lilies “golden”? Perhaps because the kings to come will be Saints, or at least truly faithful to the Papacy.

Perhaps the French Monarch and his descendants will be the best kings ever to rule in France.

It stirs one to hope, does it not? Wherever this first of the French monarchs is, we must pray for him daily, both for his Faith to endure and for his mission to be successful.

Christ Himself makes a beautiful promise to France:

“I will send Saint Michael over, the Prince of Victory, to bring the Lily to the bolster of your head… From day to day, you will see how I will reconcile with you, according to the extent it will blossom little by little… I will come to visit you and raise you by Myself.”

What is a bolster? It is anything that holds something up. For example, we use cylindrical bolsters under our necks, for pillows.

This French Monarch who is promised to come is to be the bolster for France’s resurrection from the death of masonic (atheistic, man-centred) “democracy”.

But this satanic form of government, which refuses to follow God, is not just in France. So will the other countries also be raised away from their masonic controls by Christ?

Yes, perhaps so. Perhaps the French Monarch will be the major leader left in the world.

Saint Michael the Archangel, as the defender of Holy Mother Church, rejoices at this fight alongside us, the faithful soldiers.

Notice how he describes the fight, and recognize it for the fight that we are currently living today:

“…here comes the moment for fighting against Hell whose rage is more red-hot than burning coals. But do not be afraid of anything, because you are the fighters for a good cause. Double your prayers for the sinner’s and the blind’s sake...”

This war is a war fought with our PRAYERS!

What is the strongest spiritual weapon at our disposal?

The Holy Rosary. Never stop praying it, never. The devil and his minions will fight us to neglect this most powerful weapon, to leave it tossed aside.

They will try to oppress us that in this time of evil, we can do nothing, and so our lives mean nothing, but this is a satanic lie!

Your Rosary is what defeats the demons and their attacks. Every day begin with the intention and determination to pray at least the full three Mysteries; that is, the fifteen decades.

Saint Michael is telling us to pray more: “Double your prayers”.

He is teaching us how to fight this war so that we will win!

Remember to pray the prayer to this mighty Archangel also. The prayer penned by Pope Leo XIII to Saint Michael the Archangel is linked after this post. Never forget that it is a powerful prayer of exorcism!

Saint Michael is our captain, yes, but our general is the Blessed Virgin Mary. She is the Queen of the Angels.

Recall the beautiful prayer that is prayed in Her honour by Holy Mother Church:

“Who is she that cometh forth as the morning rising, fair as the moon, bright as the sun, terrible as an army set in [battle] array?” (Canticle 6).

Let us honour our General, the Queen of the Holy Rosary, by faithfully praying the Rosary She gave us, in order to conquer all demons and save our loved ones, and other souls, from an eternity in hell.

Pray for us, O Queen of the Holy Rosary!