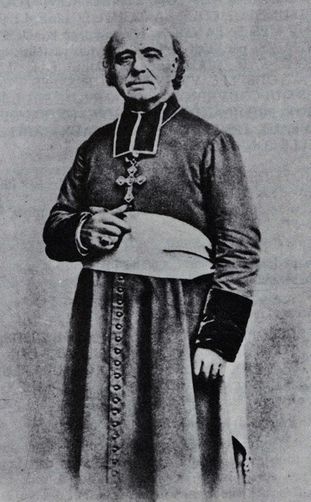 Bishop Fournier, Bishop of Nantes, Brittany, and Marie-Julie Jahenny's bishop, warns the Popes of the future, of the pernicious attacks against bishops and priests. Bishop Fournier, pray for us!

Note :  The Holy Ghost would communicate to Marie-Julie in the form of a Flame. In this prophecy, we see that there are multiple flames.

Upon entering the vision, I contemplate and worship the Divine Crucifix, surrounded with its flames.

The first Flame says: “The soul of a Christian is a seed I plant in the field of the Church, for it to bear fruits in graces and virtues… If the Lord increases tribulations upon souls, it is because His Divine Hour gets closer to bursting out upon [the] earth. This is the proof of His Divine Bounty…

The same Flame goes on saying:

“I declare [that] a cruel desolation will cause all the people at the centre of this diocese to complain, groaning.”

“God’s friends, it is a matter of a multitude of culprits, capable of all kinds of evil; they are perverted and in such evil dispositions as for God never to be able to bring them back:

“Look here: in Nantes, near the square of the House of Justice, a meeting will arise, numbering five hundred men, all that can be accounted for in matter of people hungering after blood and victims.

“Terrible abuses will take place:  first against the clergy, against the rules of Catholic religion, against the mortal Saviour of this country. They will be supported by human authority, so wicked at that time.

“In their unquenched and indomitable rage, they will walk in a remarkable way along the path of increasing sorrows. On that street, next to the Hall of Justice, during the darkest hours of the night, a large number of victims will be sacrificed at that heart of the diocese.

“The most quivering part is that, from the midst of that group, papers will come out:  with no other purpose than overwhelming with shame and wickedness those who are awaiting, with perseverance, the realisation of God’s promises. About that same period, more painful from day to day, one will have the feeling he has to endure that guilty injustice.”

The Flame says it will be about the same time when a perilous law will grant the freedom to let out the rascals who, until then, will have been held in captivity.

Nothing will oppose the Parliament, since the lonely man will already be in the full extension of his triumph, as immense triumph crowning his desert, through the overthrowing of the earth and the world.” (November 16, 1882)

“If in the midst of all those misfortunes,” says Monsignor Fournier, “the Pastors of this diocese were to revive the vow, or if another one were made, the afflictions would be much lesser:  such a vow would check the enemies’ rage.” (Madame Gregoire, October 17, 1882)

“Give preference, dear sons, to the palm of martyrdom rather than accepting offerings from those who will have subdued you to such pitiful pains, and who are going to invade your dear France entirely with their power and their wicked and perverse massacres.

“Dear sons, group around yourself your sons and your priest-brothers in order to protect them from the offering of mortal men, against whom they have been warned. Such a sorrow will make your soul sad and burn your heart, just as if death were coming to strike on you.

“You will see words being circulated in France, so dear to all Popes, but especially to the one who is ruling at present time, and who is crying daily at the sight of the abyss in which his children are being lost.”

This next part of the November 16, 1882 prophecy speaks of the persecution of the Catholic Church through a concentrated onslaught directed at Catholic bishops and priests. It is joined with a brief prophecy on the same topic, dated October 17 of the same year.

The Church is to be crucified with Christ, and so the Holy Ghost appears as flames all around Marie-Julie’s crucifix.

The first flame speaks of the necessity of the Catholic Church for the salvation of souls. The Church is compared with a field where seeds, meaning souls, are planted in order to “bear fruits in graces and virtues.”

This is a re-iteration of the dogma, “Outside the Church there is no salvation.”

It is also a catechetical re-affirmation that, for us to “grow in graces and virtues”,we must face adversity and learn how to overcome it. It is for our benefit that “the Lord increases tribulations upon souls” because we are given a chance to grow in holiness (to earn those jewels for our crowns in Heaven).

The fact that He will increase our tribulations “because His Divine Hour gets closer to bursting out upon [the] earth” truly shows God’s great Love for us, since death will cut the time that many of us think we have in which to earn graces for Heaven.

Remember that 2/3 of humanity will die in the Three Days of Darkness, and that the good will die along with the bad. So, it may be God’s Holy Will to take many of us during this great world-wide punishment.

And as for the “cruel desolation” that is brought to bear on the diocese of Nantes, we who have the singular privilege of sharing this Silent Exile with His Holiness, Pope Gregory XVIII, know exactly what this is: it is the deception of a priesthood which appears to be, but is not, and the deception of sacraments which appear to be, but are not!

The desolation results from the absence of true Priests and Bishops, which means that there is a spiritual desolation, a lack of graces, and, especially a lack of sacramental graces.

This is, truly, tragic.

Indeed, they lust after power so much that they are a “people hungering after blood and victims”.

Their desire for control seeks the destruction of the Catholic Papacy and the Church, firstly, and then it seeks to rule in the form of secular governing bodies, such as legal systems and governing authorities.

Thus it is that “[t]errible abuses will take place:  first against the clergy, against the rules of Catholic religion, [and then politically] against the mortal Saviour of this country.”

The mortal Saviour of France is, of course, the French Monarch. He will once again make France into a kingdom with a rightful king, and he will bring the Pope back to the Seat of Saint Peter. This is why these demonically-inspired enemies seek the French Monarch's destruction as well.

The Holy Ghost also tells Marie-Julie of His quivering Just Anger which results when those who are good of heart are attacked by lies in print: “papers will come out:  with no other purpose than overwhelming with shame and wickedness those who are awaiting, with perseverance, the realisation of God’s promises.”

Even false "deals" will be sought:

The Bishops, perhaps this even includes the Bishop of Rome (the Pope), are presented with the promise (and remember that the devil is the father of lies) that things will go better for everyone if concessions are made:

“[T]he Pastors … were to revive the vow, or if another one were made, the afflictions would be much lesser:  such a vow would [supposedly] check the enemies’ rage.”

Bishop Fournier, who had investigated Marie-Julie’s visions and was himself a firm believer in her messages, and a friend, appears to Marie-Julie and encourages the Bishops to die as martyrs when faced with such an evil “choice”:

“Give preference, dear sons, to the palm of martyrdom rather than accepting offerings from those who will have subdued you to such pitiful pains, and who are going to invade your dear France entirely with their power and their wicked and perverse massacres.”

Of course, we know now that the invasion first occured in France, then the Church, through the pushing aside of the Papacy, and finally all of the countries of the world.

In fact, it becomes clear that Bishop Fournier is speaking to the Popes who will face these decades of masonic attacks when he says:

“Dear sons, group around yourself your sons and your priest-brothers in order to protect them…”.

Recall that a Pope becomes a Pope when He is elected as Bishop of Rome. The bishops of the world become His sons, because He is their father, their head. And because the Pope is also the High Priest, all priests around the world are his “priest-brothers”.

Bishop Fournier warns future Popes that the triumphs of the bad men will bring “a sorrow [which] will make your soul sad and burn your heart, just as if death were coming to strike on you.”

And finally, he warns of written attacks being spread against the Papacy and the Catholic Church which will lead souls into apostasy. France, which historically always defended the Papacy and the Church, is the first to be the breeding ground for those who will attack the Vicars of Christ and His Church:

“You will see being circulated in France, so dear to all Popes, but especially to the one who is ruling at present time [Pope Leo XIII], and who is crying daily at the sight of the abyss in which his children are being lost.”

For we who are living in a Silent Exile, amidst the ravages of the attacks of the masons upon Holy Mother Church and Her Supreme Pontiff, and still suffering more attacks daily, it seems astounding that the devils were already causing the damnation of so many souls during the time of Marie-Julie, in the year 1882, during the reign of Pope Leo XIII (1878-1903).

It is no wonder then that Pope Leo XIII wrote that most powerful exorcism prayer, the Prayer to Saint Michael, Archangel.

A part of this prayer tells of the pushing aside of the Papacy:

"These most crafty enemies have filled and inebriated with gall and bitterness the Church, the spouse of the Immaculate Lamb, and have laid impious hands on her most sacred possessions. In the Holy Place itself, where has been set up the See of the most holy Peter and the Chair of Truth for the light of the world, they have raised the throne of their abominable impiety, with the iniquitous design that when the Pastor has been struck, the sheep may be scattered." (1910 Racccolta)

This prayer shows that the Holy Ghost had revealed to Pope Leo XIII that an infiltration would take place, and that the visible Seat of Peter would be taken over. It is exactly what has happened to Holy Mother Church, it is the cause of Her Exile!

Truly, the infiltrators, the false “priests” were already, in 1882, making their inroads into the seminaries and the parishes, and most especially into Rome. Recall that Rompolla, one of Pope Pius XII’s secretaries, who was thought to be such an upstanding Catholic cardinal, was found to be a high-ranking mason who had facilitated the advancement of many fellow masons into the highest ranks of the Church!

An excellent book to read about these masonic infiltrators is AA1025: The Memoirs of an Anti-Apostle, by Marie Carre.

Protect us, O glorious Prince of the Heavenly Host, Saint Michael, from the insidious devils.