The Instrument of Divine Desires 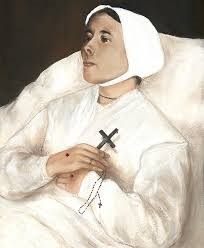 Marie-Julie Jahenny expiating for the sins of others.

My dear child, rest now upon my Heart. Listen to my tender words. For some time now, you should not be here.

She tells me these words with a smile.

The plans of my Son should be accomplished. This is why you are still here:

All mankind of the earth – except those whom you know, my children and my victims – all show no change, a subject which weighs upon the Church.

My dear Son has wanted to wait to make His Power to explode. I have much hope that, more or less, hearts will return to the Faith. Thus, my Divine Son has held off your happiness [to die and go to Heaven].

--Oh, my Mother, when the Good Jesus will find that it is time, I will be ready.

My daughter, you are at the last degree of atonement: it is not for yourself that you suffer.

--Good Mother, it is more for me than for the others. How much I have to return to the Good God for all that He has given me…to fill me!

My dear child, henceforth you are no more than an instrument of Divine Desires. You are just to pay for the ingratitude of sinners.

--I do not want anything for me. Put all toward buying back what was the price of the Blood of Our Lord.

It is upon all the favours that you have received that my Son takes the gold to redeem the guilty.

In recompense, my Son will open a new mission for you: a day of much suffering, Sunday.

--Oh, yes! My Good Mother. I have Sunday to rest, pray, relax, with my brothers and sisters… But it is more right to suffer than to enjoy. I consent to not having rest except in suffering.

My dear child, lily of my Heart…

--My Mother, I only want one name, and that is of sinner.

Sunday, My Child, will be to expiate for impure conversation, words that are disgusting, the guilty projects, the blasphemies.

--From where does it come, my Mother, that I feel from the language of the heart, a sensation of burning coals, like an inextinguishable fire?

Do you not know, my dear child, that language joins to the heart when it blasphemes?

This is the cause of these great sufferings. It is your sweet Jesus who will soon make you partake of his Kingdom; it is He who makes you suffer.

Marie-Julie suffered for most of her life, for decades. She suffered to atone for our sins, so that we might convert.

In this prophecy we see important things to realize:

First, that Marie-Julie agrees to suffer and agrees to have her death delayed so that she can expiate for more sinners and delay the Divine Chastisement.

Secondly, we see in her ready willingness that she truly knows what the eternal horrors of hell must be, because her sufferings are so extreme, and for decades and decades. So her charity is sublime, and she is referred to by the Blessed Virgin Mary as “lily of my Heart”. The salvation of souls by Marie-Julie’s sufferings pleases our Good Mother very much, they fill her Immaculate Heart with peace and sweetness.

Thirdly, it is 1880, two years into Pope Leo XIII's Papacy, and Holy Mother Church is still suffering from the attacks at the hands of the masons against his Predecessor, Pope Pius IX and the taking of the Papal States. Which government spoke up against this act of agression against the Catholic Church? Perhaps the masonic ideals of mankind taking over all control, and limiting the power of the Church, (in their demonically-deluded way of thinking) is already becoming universally accepted, for Christ tells Marie-Julie:

“All mankind of the earth – except those whom you know, my children and my victims – all show no change, a subject which weighs upon the Church.”

Fourthly, this communism brings the filth of hatred for God and all that is holy. We are taught, through this prophecy, how a blasphemy uttered by the mouth attaches itself to the soul like a cancer:

“Sunday, My Child, will be to expiate for impure conversation, words that are disgusting, the guilty projects, the blasphemies.

--From where does it come, my Mother, that I feel from the language of the heart, a sensation of burning coals, like an inextinguishable fire?

Do you not know, my dear child, that language joins to the heart when it blasphemes?

This is the cause of these great sufferings.”

Yes, even the sin of blasphemy causes “great sufferings” to the Divine Justice, and to Marie-Julie, who agrees to expiate for them. If blasphemy is so grievous as to cause a soul to be damned for all Eternity, then how much Marie-Julie must have had to suffer to expiate for just one of these sins!

Can we truly even come close to understanding what Marie-Julie’s sufferings have been?

As it is more than likely that we ourselves owe the great graces that we have received and continue to receive, to Marie-Julie’s sufferings for us and our times, let us read reports from her physician, Dr. Imbere-Gourbeyre, who was also in charge of the medical inquest:

“Since the beginning of June 1880… Marie-Julie had had to endure extraordinary suffering during the ecstasies on Mondays, Tuesdays, and Thursdays of every week. At each ecstasy, there was a new scene. Her manifold sufferings were announced during the preceding ecstasies; what is even more remarkable is that they were described and as it were commented on during the ecstasy by Marie-Julie herself…

During the Way of the Cross, the preceding Friday, Our Lord had said to Marie-Julie who repeated His words during the ecstasy, which were then taken down by the secretary. “On Monday, to expiate the culpable offenses that I will receive and that I will have received this month, I will oppress you in a different way. Ah, your limbs will shrink, I will reduce you to being so small that you will have no freedom in any limb; your head will be fixed to your bones, and you will be like the worm that I destroy. In this pain your sufferings will be very violent, all your joints will suffer. With this pain you will have a burning fever. Your tongue will be swollen, very large. There will be a terrible swelling at all the joints of your bones, and this will show how strong the pain is.”

“All of the prophetic program was to take place before my eyes,” said the doctor. “This took place on Monday 27th of September 1880. . . .

“A few days after having assisted at these extraordinary sufferings, I heard Marie-Julie announce in front of me in profound ecstasy that she would soon have a new and long illness. In the preceding six months, she had often said that God had asked her for the complete sacrifice of her ears, eyes, speech, and movement. She accepted everything…

On Sunday 19th of December, Marie-Julie knew by revelation that her sacrifice would begin two days later; now, the following Tuesday, she lost her speech and no longer heard the voices of her family. She knew the following day that she would become blind in three days’ time; the third day she was blind. The conditions of her dumbness were extraordinary. The tongue was immovable, as hard as a stone, pushed backward with the point bent under and completely blocking the throat. Her mouth was closed, the lips motionless and one no longer saw Marie-Julie praying.

On the 10th of February 1881 the following words of the ecstasy were recorded. Our Lord was saying to the victim: “Do you want to suffer again?”