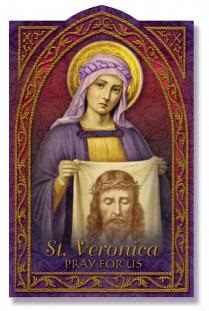 Saint Veronica pray for us!

The Holy Virgin had the promise that the first Christians would join themselves to His Sacrifice. It is Seraphia, who, being the first, repeated to the Holy Virgin that she would be close to her up to the tomb where Jesus was buried.

It is this same Seraphia who nourished Jesus when He preached in Jerusalem. Every day, she had her food brought to Him in a very poor and very honest business house.

The Holy Virgin went over in her heart all the kindness of this woman. Seraphia, when she was not yet married, assisted at the marriage of Joseph and Mary. Seraphia was a cousin of John the Baptist.

This fervent Veronica – she carried the name Seraphia – consulted the Holy Virgin on the subject of a proposed marital union with Sirach, a man very opposed to religion.

The Blessed Virgin Mary answered her:

“You will have to suffer, but two men will tear away from the error of Sirach, who will be employed in the temple, at the service of Anne, and of Herod.”

Veronica followed the Divine Will. She married, at an advanced age, with Sirach1, whose violent blows she suffered for many years. They were, very often, desperate struggles.

He was with Nicodemus, Joseph of Arimathea, John the Evangelist and his brother Apostle. They stopped before the grill which separated the Hall of Judgment of Herod, and stayed in the room through which one passed to access a seat of the Tribunal.

It is there that, hit by indignation and by anger against Herod, he declared himself, in a loud voice, for Jesus. Sirach there received, for always, the Faith in which he would die.

Due to this declaration, Herod denounced Veronica’s husband to Pilate. Sirach understood, in his turn, and three days after the death of Jesus, he was thrown into a prison from which he would never come out alive.

From his prison he sent word to Veronica that she could, until his death, follow Jesus and offer him that which she had that was the most precious.

Veronica had no children except a niece which she had adopted as her own child. She was the daughter of a brother in the test [a Christian]. Her mother was not alive anymore. Sirach sent word to Seraphia to leave all her heritage to this child who would be her support.

When Veronica was conducted to Rome, the poor daughter stayed as mistress of her house until her return.

Later Veronica had to suffer the most painful torments. She escaped from the persecution, and passed into the country which is behind Jerusalem, but at a long distance… She was arrested as a Christian and died at 57 leagues from the house where she had always lived and where she hoped to die.

The Holy Virgin was profoundly afflicted by all the cruelties that Seraphia underwent, but she had only a few days left to spend on the earth. She consoled herself in the thought of finding her, with all the True Christians who had suffered for the name of Jesus.

Saint Veronica, whose name was Seraphia, had years of hard suffering from being married to a man who hated religion.

When Seraphia first told the Virgin Mary that she was to marry Sirach, the Blessed Mother told her: “You will have to suffer".

Why? Because all of her efforts to convert her husband would fail. She was told that "two men [would] tear away from the error of Sirach", but Sirach's heart would not be moved.

And Sirach was a violent man.

Perhaps Sirach was jealous of her love for God; perhaps this is why he beat her so severely. Perhaps it was that the devil knew that her prayers would snatch Sirach from him, and so he wanted to punish her.

Seraphia endured years of a domestic violence that few are willing to endure, or believe they can live through, because it is that horrible.

She was named after the Angels called the Seraphs. They are the ones who are the closest to the throne of God, continually bowing before his Divine Presence, covering their faces with their six wings.

And like the Seraphim whose name she carried, Seraphia hurried to kneel before Christ on the day He carried His Cross.

Seeing His beaten, bloody Face, she wiped it with her veil, in the midst of the soldiers and crowds, because her Faith and love impelled her to comfort Him.

Christ, returning her love, gave Seraphia the very personal image of His bloody and bruised Holy Face. He gave her the image of holy suffering and self-denial.

What Christ did for Seraphia was to leave her with a lasting meditation about a suffering which gives life, as modeled by His Holy Passion.

Was His image on her veil a reward for her excellent suffering or was it her means to sainthood?

How and when did Seraphia become Veronica?

Probably at the moment of taking this bloody veil home and seeing the wondrous image of God's Love not only for her, but for Sirach, also.

You see, her husband Sirach, who hated religion, "was converted on the day when Jesus was to carry the cross."

This was Christ's first gift to Seraphia.

His second gift was the miraculous image of His holy, bloody, and pain-filled face. By meditating upon the Holy Face, Seraphia came to  understand God's unconditional love for mankind, His patient, suffering  love.

And perhaps Seraphia became Saint Veronica long before her martyrdom, because she had learned how to love enough to forgive. Even Sirach.