Pius IX and One of His Successors 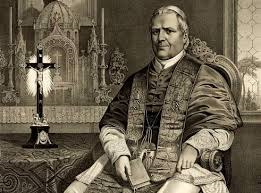 In this prophecy, Pope Pius IX reveals that He has seen the victory of the French Monarch and the Church Militant.

Peace be with you! our Lord tells me. I am the voice of Truth. If I am severe in appearance, I do not leave souls that I love to be lost.

… Adore Me and greet the Sovereign Pontiff Pious IX.

My son, Jesus says to Pius IX, give your benediction.

He extends his gracious hand over us and says:

I am upon my knees, at the feet of Our Lord.

Sing, says Jesus, a song to My Glory and to the triumph of Holy Church. My son, Pius IX, begin it.

--The Church of Jesus Christ, says the latter, [Pope Pius IX], will triumph on earth. She will resist the fury of those who are positioned to fight Her. Sweet and holy Church, your triumph approaches, but for you… You will lift yourself triumphant, Temple of the Lord, your enemies will fall to their knees, during the victory of the Church Militant.

--Write these words in your heart, replies the Lord, as a perpetual souvenir … until the moment of your death.

--It is with happiness, says Pius IX, that I have left this life. Upon leaving it, I let one tear escape from my eyes for my priests who celebrate the Holy Sacrifice with joy.

I have been well consoled during my priestly life; I have also had many sorrows, because I have seen some of my dear priests celebrate the Holy Sacrifice with hearts which carry a weapon against God. What I have suffered!

My children, how many times I have turned my eyes towards that France which I love. I have seen smeared, on Roman soil, the blood of the French. I blessed the blood of this people…

I left earth; I took my flight to Heaven and, immediately, the Lord took me into His Glory. I cannot say that I have seen the suffering of the souls in Purgatory, for whom I had a particular devotion.

After I was in the celestial regions, I foresaw all and, I assure you, by the All-Powerful Mercy of God, take up your weapons and, if they are rusted, they need to be polished.

--I do not understand, good Holy Father.

--Know, replies Our Lord, that this discussion is perhaps the most important of all my revelations. May nothing be lost!

--This conversation, says Pius IX, will be long… I say:  prepare your weapons. The best are prayer, the Faith, and confidence.

Pray much for my Successor, He to whom it is reserved to see the disorder of this great Roman city. His enemies will push Him right up to forcing him to apostatize, but his faith will be unwavering.

I have been exiled; I have left my prison; deprived, rejected, imprisoned.

This Successor of Saint Peter will be exiled with more rage and ferocity than me. They have tried to make me perish; they tried to use a trap to strangle me, but a powerful hand has dismissed the wolf from its prey.

--You are capable to repeat my words. The Lord has desired you here.

--… O Rome! Where are the first walls that Saint Peter had built for His Successors? These walls have crumbled; we had built others and these have also crumbled.

I hope that, for Him, the French will have the same devotion as for Me.

This must happen when a zealous and fervent king will make the delights of France. A great struggle swings on France and on Rome. This storm will bring back a predestined, triumphant king, whom men refuse, but whom Heaven loves.

I love him, this king, and I leave to My Successor the thought of this great prince who will come to his help…

Coming from Heaven, Pope Pius IX seems to transcend earthly time as he blesses not only Marie-Julie Jahenny and her devoted friends, but also "the exiled ones."

While Pope Leo XIII (the immediate Successor) maintained the same position of being captive in the Vatican when it came to dealing with the abusive Italian State, and could thus be considered in exile, we cannot discount that Pope Pius IX is not blessing "the exiled one" (as in Pope Leo XIII), but "the exiled ones", plural, which may, in fact, represent the Church Militant since October 26, 1958, which has been enduring the Silent Exile, a first in Church history:

And then, what sweet words of Pope Pius IX to all of us who endure this exile with His Holiness, Pope Gregory XVIII:

“The Church of Jesus Christ . . . will triumph on earth. She will resist the fury of those who are positioned to fight Her.”

The fury of Christ’s enemies is a demonic fury, which never rests. This fury always seeks to dishonour and thus discredit; remember the prophet Daniel’s story of the falsely accused Susannah, a figure of Holy Mother Church as the loyal and spotless Bride of Christ.

And Holy Mother Church has suffered too long watching Her children’s souls being choked by the deadly poison of satanic lies!

Pope Pius IX calls the Church in Exile a “Sweet and holy Church, [whose] triumph approaches”.

Pope Pius IX consoles us with his adamant declaration of what God has shown him in Heaven: “You will lift yourself triumphant, Temple of the Lord, your enemies will fall to their knees, during the victory of the Church Militant.”

Deo gratias! May that long-awaited day of triumph come soon!

But we must all be active soldiers for this day of triumph to arrive! There is no rest for any member of the Church Militant!

Let us take Pope Pius IX’s words to heart: “[P]repare your weapons. The best are prayer, the Faith, and confidence.”

It is for sure: we need all three weapons, for without Faith and confidence, we cannot pray! Remember that Faith can move mountains! (Matthew 17:20).

The first defense of a Pope are the bishops and cardinals, the princes of the Church. Sadly, the true prelates proved unable to fight against the onslaught of communists which had infiltrated into positions of power:

“O Rome! Where are the first walls that Saint Peter had built for His Successors? These walls have crumbled; we had built others and these have also crumbled.”

The result was that many holy men and women have gone to battle for the Holy Mother Church, despite the Silent Exile that was imposed upon Popes Gregorius XVII and XVIII.

In fact, it seems most probable that Pope Gregorius XVIII will be the Successor to see the actual final bloody battle for the Papal Restoration:

Out of all the defenders, France has always been the strongest defense for the Catholic Church throughout history.

Even Pope Pius IX was aided by this eldest daughter, and so he says:

“I hope that, for Him, [the Holy Father in Exile] the French will have the same devotion as for Me.”

And, yes, France will fight for the Catholic Church again, for she will be led by a most Catholic king, he whom prophecy calls the French Monarch:

“A great struggle swings on France and on Rome. This storm will bring back a predestined, triumphant king, whom men refuse, but whom Heaven loves.”

The masonic French government, media, and other such strongholds of the enemy will hate God’s Chosen King. But Catholic hearts will begin beating again when they realize that their True King has finally come to deliver them from their filthy slavery:

“I love him, this king, and I leave to My Successor the thought of this great prince who will come to his help…”