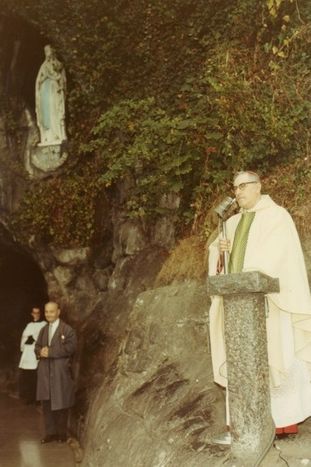 Pope Gregory XVII speaks to pilgrims at the grotto at Lourdes, where our Blessed Mother appeared from February 11-16, 1858. In 1958, one hundred years later, the masonic takeover occurred after Pope Gregory XVII was elected on October 26. What might his posthumous mission be?

I will go to prepare the troops who will accompany Me from earth to Heaven. I am going to make the day arise where there will no longer be any darkness. Night will not rule all the time that I am passing over the earth. I will make My people forget the terrible combats that will only end when I have sent a very beautiful warning. This bright unveiling will make my people aware that they are at the door of the great days, that will not close until the earth is left orphaned. This will be the beginning of the great deluge…

After this I read:

I did not say that your mortal eyes would see this star arise in the last days… But at the doors of My Heaven, in this high transport, I will make it arise to the eye of your soul, the same as to the eyes of all my children. These will be invited to look at this faithful message which will bring salvation through fighting.

According to the ardent desires of My power, you will come, from one time to another time, to sustain hope to My Apostles and to My servants; waiting until the man of their desires finally lifts the veil. Although enthroned forever in My Heaven, My supreme orders will not be held up for My waiting people. I will send you, from time to time, to announce the good news. You will descend from the height of Heaven, even in the midst of my servants who will have to re-do a work that is double the work of today…                    (7 March 1882)

From Heaven, you will see the triumph of the Church hover in front of My servant, [Prince] Henry of the Cross: his name is written in the book of gold. He will come to console the indigent, renew the devastated priesthood, weakened and fallen like a branch under the saw of the worker. His charity will renew the priesthood, will again raise up the statues of My Mother, will bring back the insulted Calvaries which have been reduced to shreds.

The innocent soul at the heart of Brittany will be, for the Servant of the Cross [Prince Henri], the messenger of orders from On-High.        (14 February 1882)

Reflection on these two prophecies:

The revelation that Marie-Julie Jahenny has a posthumous mission should not surprise us, as the Saints in Heaven are able to actively help people on Earth, such as when they intercede for us before God in answer to our prayers.

What might their responsibilities be in helping their Successor and the Church Militant? ...To strengthen His Holiness of the Cross, Pope Gregory XVIII.  ...To remove barriers (both present and future) for the French Monarch, Prince Henri.

While the actions of hell seem to be powerful on earth, our Faith tells us that this can only be a satanic illusion, for the true power rests with God our Creator.

Storms, for instance, have been dramatically reduced or stopped in answer to the prayers of the Church Militant. So have some illnesses, potential tragedies, and injustices.

Where there is prayer in communion with Pope Gregory XVIII, prayers are heard by the Almighty God; we have plentiful evidence of this. May His Will be done, for there are so many who need our prayers!

But the battle is a spiritual one, as it will “make the day arise where there will no longer be any darkness.”

It will be a “passing over” of our Lord Jesus Christ’s Justice, like the Angel passing over the homes of the Israelites in the Old Testament [Exodus 12:29].

“Night will not rule”, meaning that evil’s time will be over.

In other words, God’s Justice prevails, the Truth of God is no longer suppressed, and there is a resurgence to the true Faith of the One, Holy, Catholic, and Apostolic Church.

We in the Church Militant will forget our old griefs and sufferings when we behold God’s special gift, “a very beautiful warning.”

We will know that we are “are at the door of the great days” and we will await the coming of “the great deluge” which, if we have not already lived them, will be the 3 Days of Darkness.

This “very beautiful warning” seems to not be visible to the physical eye, for Christ says: “I will make it arise to the eye of your soul, the same as to the eyes of all my children.”

This seems to refer to the inner warning which we will receive “before the roads on earth are closed” [another prophecy given to MJJ] so that we can get to Brittany, the special place prepared for us to survive.

Marie-Julie’s posthumous mission is to “come, from one time to another time, to sustain hope to My Apostles and to My servants.” Her job will be to tell us of “good news.”

And Marie-Julie does come to us, across time, through her prophecies, which are more relevant to our day and more clearly understood, because the unjust and painful Silent Exile of the Papacy, with the resulting destruction of the priesthood and defiling of the holy sacraments have all happened as Heaven has said.

So now we await the prophecied saviour, Prince Henri. Marie-Julie has been told that Heaven protects him.

God will act through the French Monarch “Henry of the Cross” and God’s “supreme orders will not be held up for My waiting people.”

In other words, the waiting will have ended.

Through the Heavenly-inspired actions of the French Monarch “you will see the triumph of the Church hover in front of My servant, [Prince] Henry of the Cross.”

Prince Henry’s actions will “console the indigent”; that is, those who have suffered real hardship and deprivation.

This French Monarch will also “renew the devastated priesthood” by first helping the Holy Father out of His Silent Exile and onto the Seat of Saint Peter for all to see.

The French Monarch may be called “Henry of the Cross” because of his prophesied alliance with the See of the Cross; that is, the Pope in Exile.

The true and holy Sacrifice of the Mass will flourish around the world again as Henry of the Cross “will again raise up the statues of [Christ’s] Mother, will bring back the insulted Calvaries [true Masses] which have been reduced to shreds.”

And Marie-Julie, that “innocent soul at the heart of Brittany” will come spiritually to Prince Henri of the Cross to bring him “orders from On-High.”

Holy Mother, through Thy holy apparitions at Lourdes and Banneux, intercede for Henri of the Cross and for the See of the Cross!

LINKS:  Pope Gregory XVII   The See of the Cross   3 Crises in France   French Monarch   St. Michael Prayer   Getting to Brittany