UNDER A TREE BLESSED BY THE HOLY TRINITY 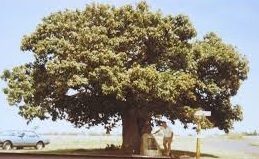 The chestnut tree mentioned in this prophecy is a mystical tree which God has blessed and given to good Catholics for their protection from "the council of the wicked"!

Look, says Saint Michael, there are our birds.

They will land on a low tree whose branches are very extended. I do not know this tree, but it looks to me like a chestnut tree.

“My children, there is a tree which is blessed. It is offered by the Holy Trinity. At the height of peril, at the moment when France will be convulsed, all are to come under this tree, and you will be protected there. In this invitation I do not speak of Brittany. This tree is planted here for the good French, for the souls who love Me.”

He immediately says to Saint Michael:

“Hit with your sword and make paths on all sides. My good people will come to shelter under this tree by means of these paths that will be opened. It will be the home of peace: I will put the righteous ones there. Nothing will fall on this tree: neither the hail of fire, nor the whirlwinds of red flames, nor this black fire which will burn. Those who will be beneath it will also be as happy as those of Brittany.”

Then, addressing Himself to Saint Michael, he says:

“As soon as you hear the roar of the council of the wicked, you will warn all parts of France, and you will tell them to come under this tree” (15 January 1878).

The year is 1878, and Marie-Julie is witnessing a conversation between Christ our Lord and Saint Michael the Archangel about the “council of the wicked,” possibly the V2 council, that council which allowed protestants and other enemies of Holy Mother Church to change the way Catholics pray and think!

Pope Gregory XVII was asked about the V2 council by the international press, and His response, "We will not be bound by these decrees." appeared in newspapers around the world.

What did these words mean?

That the Pope, and therefore Catholics, were not to follow the wicked decrees of the V2 council.

What the press did not point out was the use of the royal "We", which is used by Popes and monarchs, since it indicates that they rule by God choosing them to rule; meaning that they rule with God.

No reporter ever questioned why a mere cardinal would use the Papal "We"...

From this we can see that the masonic controls were already well in place.

But in this prophecy, we learn how God will protect good Catholics from the evil V2 council:

Christ tells Saint Michael that “there is a tree which is blessed. It is offered by the Holy Trinity.”

This tree is “a low tree whose branches are very extended.”

It is a mystical tree, because “[a]t the height of the peril… all are to come under this tree, and you will be protected there.”

If all good Catholics are to come shelter under this tree, then this is why its branches are “very extended”, because this mystical tree will be available to all people worldwide.

Saint Michael is told to prepare the means for the people to find this safety: “Hit with your sword and make paths on all sides. My good people will come to shelter under this tree by means of these paths that will be opened.”

The fact that this tree is “low” means that it is hard to see. Being low to the ground, it would remain hidden to most.

This tree seems to be a mystical representation of the Pope and the Church in the time of exile.

What else characterizes this tree?

Christ calls it a “home of peace” because He “will put the righteous ones there”, meaning that the Catholic Faith will be practiced there.

It is a place of safety for Catholics from great sufferings: “Nothing will fall on this tree: neither the hail of fire, nor the whirlwinds of red flames, nor this black fire which will burn.”

In fact, Christ seems to be speaking of the 3 Days of Darkness Divine Chastisement when he says that  “[t]hose who will be beneath it will also be as happy as those of Brittany.”

In other words, the punishments will be felt with less intensity. Recall that Brittany is also to suffer the 3 Days of Darkness, and the fire falling from the sky, and the earthquakes, but to a lesser extent!

This short prophecy gives us, who are with Pope Gregory XVIII in this time of exile, much food for thought.

This prophecy of Marie-Julie’s in using the image of a tree, brings to mind the prophecy of Elizabeth Canori-Mora, who died in 1825, which speaks of Saint Peter descending to the earth to draw a cross with his staff, from the ends of which four trees grow up.

What could these four trees represent, as places of safety for the faithful to come for the Holy Sacraments?

Certainly, it makes one think that there will be a total of four Popes to provide these Sacraments for the sheep (the faithful) while the Church is in Her exile. Popes Gregory XVII, Gregory XVIII, and two more:

“…. Saint Peter was dressed in his pontifical robes, and held in his right hand the pastoral staff, with which he was drawing upon the earth an immense cross; … After this the holy Apostle touched with his staff the four extremities of the cross, from which instantly sprung up four beautiful trees loaded with blossoms and fruits. …. Saint Peter had produced these four symbolic trees to the end that they may serve as a place of refuge to the little flocks of the faithful friends of Jesus Christ, and in order to preserve them from the fearful punishment which will convulse the whole earth. All good Christians shall then be protected under these trees, together with all those religious persons who shall have faithfully preserved in their hearts the spirit of their order.” (Catholic visionary and mystic, Elizabeth Canori-Mora, here cited from pages 188-189 in The Prophets and Our Times, by Rev. R. Gerald Culleton, Imprimatur 1941).