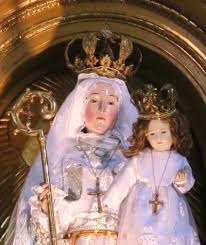 May Our Lady of Good Success (above) guide all good Catholics to find the Catholic Church during this time of exile. Hail, Pope Gregory XVIII!

“My children,” says the Holy Virgin, “all the earth suffers, and above all, France. Burning coals will burn the chest… France is on the grill of despair and yet she does not wake up.”

--Good Mother, if she has lost faith, then who will have pity on her?

“My children, she has lost faith but, at the bottom of her heart, she still has some left over. She has not been able to lose it… she has done many conspiracies and projects; all have been in vain.”

--This leftover faith, she will never violate it.

“Oh! My children, never has there existed a time as painful as today!”

--However, Good Mother, there were many misfortunes in the past.

“Yes, my children, people have suffered much in the past, but much less than will be suffered because faith was less developed then: ignorance was great; today all are instructed [catechized]. This is why evil is deeper.”

Last week we looked at a prophecy where a “council of the wicked” lays assaults against the Church; either the V2 council or a masonic council.

That prophecy ended with Christ’s directive to Saint Michael the Archangel:

“As soon as you hear the roar of the council of the wicked, you will warn all parts of France, and you will tell them to come under this tree.”

Last week’s prophecy was about our times today; we are living in the aftermath of the diabolical V2 council years.

The tree for our protection is the exiled Papacy. Here are the life-giving Sacraments.

The prophecy for this week deals with the times of Marie-Julie Jahenny: the late 1800’s.

The late 1800’s were the preparatory years that began in earnest 100 years before with the French Revolution (1789 to 1798). The destruction of the Catholic Church was methodical, beginning with the removal of Her greatest support, the French monarchy.

The Blessed Virgin Mary teaches us that “never has there existed a time as painful as today” [today = the late 1800’s], and that “she [France] has done many conspiracies and projects; [but] all have been in vain.”

The strongest attacks against the Vicar of Christ have been in vain because the Papacy has endured and will continue to endure to the end of time.

The Catholic Church believes in Christ’s promises and teachings.

But our enemies have no such holy trust. They hate to bend the knee to Christ our Lord. They hate the kingships on earth which point to the power of God in this world: the Vicar of Christ and monarchs.

Masons push God aside because they want to determine their own lives.

But instead of attaining peace in their hearts, “[b]urning coals will burn the chest… France is on the grill of despair.”

When the Blessed Virgin Mary speaks of France having a little residue of Faith left, but just a little, it is Marie-Julie who declares that France “will never violate it.”

Notice that the Blessed Virgin Mary does not confirm what Marie-Julie says. Instead, she points to the sins of those times: “Oh! My children, never has there existed a time as painful as today!”

But moving forward, each era becomes worse as we quickly approach the time of the antichrist, when this one possessed man will rule the earth as a one world government, from Jerusalem.

Our years are marked by much suffering for us Catholics. The diabolical mind control in television and other forms of “entertainment” is rampant, and the result is that there is no room for Christ or His Vicar. The minds, hearts, and souls of our loved ones are impenetrable, and laws will condemn us with hate crimes if we speak the truth.

But we must never fall into despair, for despair is for those without Faith.

Each Catholic who is living through our current era has been pulled out of the errors of the V2 council. We have been saved from a spiritual drowning, as it were.

So we know that others can also be converted. But we must pray and beg for these conversions.

Let us arm ourselves with our daily 15-decade Rosary to the Blessed Virgin Mary, Mediatrix of All Graces, and let us battle to the best of our abilities.

The 3 Days of Darkness will end the rule of the “church of darkness,” as Ana Katarina Emerich called the novus ordo. Men, women, and children will survive this culminating Divine punishment; they will at last be able to understand what they are told, they will convert, and they will lead holy lives.