SINNERS PUT HIM OUTSIDE 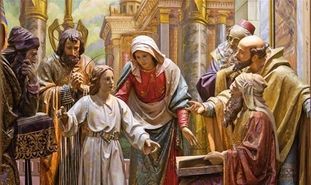 This week, we learn that Jesus Christ first instructs His Mother about the Mystery of Redemption at twelve years of age, the same age when the Blessed Virgin Mary and Saint Joseph find Christ teaching in the temple. The above scene is found at the Sanctuary of the Sacred Heart of Jesus, in San Paolo, Italy. Sadly, this church has also been taken over and become the haunt of demons.

The Flame of the Holy Ghost says that the Mother of God has always made great efforts to keep her people under the protection of the Lord. At this moment, She is making a last effort with her Son; an effort of sighs, tears, and anguish, which encloses a great bruise in her virginal Heart. It is because She sees, at a time very near, the children to whom She gave birth at the foot of the Cross denying the God of true Faith and falling into the abyss of hell.

“Oh, most holy Virgin, how many sinners escape thee after so many efforts!”

“The sinners escape Thee. At this hour hell releases the malice of human powers. The waves escape from it, and perverted hearts, with so much more violence than Thy people, do not have much longer to wait before the light of sorrow is made in their eyes. There is no longer going to be any doubt and uncertainty: the time is coming when the voices of Justice and of Grace will stop at the same time.”

At the feet of her Son, the Holy Virgin asks again for a delay of peace and rest for her people. The Lord answers her:

“My Mother, I have, at all times, granted what Thy heart asked. This time I cannot. If I wait a little longer I will see thousands of Christians escaping from Me, those whom I want to reserve for the moment when my Voice will sound. If I delay again, hell will seize the harvest and Heaven will be far from seeing its places occupied in Glory.”

These words of Jesus, says the Flame, have renewed the effect of the words of old Simeon on the Blessed Virgin Mary. This time, her heart will not be pierced by a single sword, but by a multitude of sharp swords.

The most painful ones will be those which the Apostles and ministers of God sink into Her Heart by their weakness. In the near future, they will sell Heaven to save their perishable lives. But even before the end of the repose of their peaceful lives, their souls will lose their mortal remains and suffer terrible destruction.

The Flame says, with an angry voice:

“The irreparable loss of little people will be caused by those to whom the Lord has said: Go to preach the Gospel; go, go throughout the universe to proclaim the Truth.”

It will be a beautiful resurrection at the time when peace will be restored on earth, but after it has been covered with darkness, after it will have become the tomb of the people, after the sown harvests will not have borne their fruit, after the plants have been suffering from a visible suffering…

The Hand of God has just signed the judgment of these terrible calamities, according to all the crimes and all the forfeits which already sound inside the hearts of the impious.

The Flame says that even before Jesus was twelve years old, He instructed His Mother about the mystery of the Redemption. When She received these confidences, She asked her Son that in times of unhappiness and sorrow, She might have empire over His Omnipotence. The Lord granted her this to a certain extent, but told her that at the moment when the outrages were over, He would not forgive any more.

The devil knew this word of Jesus to His Mother, and told his infernal legions:

“Let us watch at the hour when evil will be at its height, when the righteous are expelled from their jobs, at the hour when faith will apparently be only degenerate weakness; at the hour when the people will be ruled only by men who, by their abominable life, will have practically denied their Saviour.

If we listen to the proud devil, who is the father of lies, then we shall be deceived as well as disheartened.

Let us know his bragging for what it is: lying arrogance. The ratio of the lost to the saved, 10,000 : 3, cannot be correct.

Our trust in the Virgin Mother of God is our hope; Her prayers for souls is our strength.

How heartening it is to discover that Christ our Lord will not delay the Chastisement much longer because He wants us to be saved:

"If I wait a little longer I will see thousands of Christians escaping from Me, those whom I want to reserve for the moment when my Voice will sound."

Therefore, a delay of the Chastisement would allow more souls to go to their eternal damnation:

"If I delay again, hell will seize the harvest and Heaven will be far from seeing its places occupied in Glory.”

If this vision teaches us anything, it is to trust Christ our Lord with peace in our hearts, for He loves us and wants to save us!

The Blessed Virgin Mary also advocates for us without stop!

Her greatest pains are caused by "the Apostles and ministers of God, [who] ... by their weakness, ... will sell Heaven to save their perishable lives."

What happens to these weak bishops and priests?

They are damned because they have led the simple souls astray:

“The irreparable loss of little people will be caused by those to whom the Lord has said: Go to preach the Gospel; go, go throughout the universe to proclaim the Truth.”

Think of that Conclave of 1958. Think of all the cardinals who opposed Pope Gregory XVII, all those who pushed God's Pope aside for all those decades!

And today, all those who continue to live for their bellies and to deny the Vicar of Christ His rightful place on the seat of Saint Peter... where will they go for eternity? Who will be their master then?

And we who live under the silence order of today's "anything is good except Christ and Catholicism":

Why do we allow ourselves to be so controlled by our fears? When we deny Christ and His Church by our silences, when we put Him outside of our life, where will we go for our eternity?

Holy Mother of God and Refuge of Sinnners, pray for us! Show us the way to Heaven!