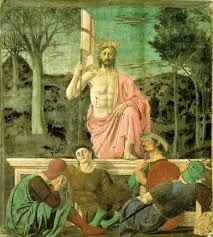 Souls need prayers to awaken to the fact that the Pope and the Church are in exile.

I enter into the vision and I see, strongly engraved into a long, strong ray of light these words:

“My children, before entering into the serious and important events, My words will pass to all the people who live on earth, if threatened, from France and, further still, to abroad [Fr. Roberdel’s footnote at this point says: ‘One of the announcements saying that the prophecies of Marie-Julie should be published before the events.’]

On another ray of light I read these words:

“… Because I am resurrected, a further word on My Resurrection, before going deeper into my wishes.”

I see, with the eyes of the soul, all the visible signs of the glorious Resurrection of our Lord. This sight is like strong nutrition to sustain my soul during these other visions which will not be happy subjects.

In the luminous cloud [that I see] He [the Holy Ghost] tells me, with a living voice which speaks as we speak, we, on the earth:

“He came out glorious by lifting the seals from His tomb. At His glorious Resurrection, He said that each person will have his own resurrection after the terrible combats on earth and the Justice of Heaven have passed.”

“Who on earth can say that the people who inhabit this homeland are not old from fighting? From now on the lights are clear enough. The time announces it with a burst that can no longer be denied, nor back down one step back. France, which will be delivered first in combat, will be the first in the tomb, but also the first to be resuscitated, according to the example of the Saviour who has announced and announces again that she [France] will come back to life.”

The Voice says that the glorious Resurrection of the Saviour does not convert those which It has condemned to death. Those who lead this kingdom to the tomb will not be converted, neither will they return to penance: they will not see its [France’s] resurrection.

The soldiers, asleep beside the sepulchre, were far from having the light and grace to see arise the resurrected Sun. Those who, today, look upon everything that is outside of God as being respectable, and all that they do against Him as being right, they will fall asleep [die] before the resurrection, but their memory will not be engraved in the memories, and on the stones which will have resisted the combat, engraved in the shudder, to be remembered until the end of all the centuries.

“Jesus, resurrected, appeared first to His Holy Mother. The pain of Calvary was so deep in the souls of the Apostles, that it gave them a sort of forgetting of the Resurrection. They were primarily occupied with consoling the Virgin and sharing her abyss of pain.

“Today, on earth, are there not any souls – the biggest in number – who do not believe in the resurrection of the kingdom by the one who is indifferent to them?”

When their only hope is in finding other leaders to govern, it will be the time when the Lord will take the one by the hand who is the opposite of these spoiled and lost minds.

When Christ appeared to the Holy Virgin in the glory of His Glory so as to console her, She was, nonetheless, little consoled when she understood, in this vision, the cowardice of His people, those who would forget the Faith, all the offenses on earth against her Son, and the necessity for Her to stay on earth, deprived of Him and dependant on an Apostle.

She consented to live separated from Jesus since this was His Will.

After Jesus was released from the tomb, the disciples and the faithful souls went each day to visit the Holy Virgin to console Her and to listen to Her words.

The second time that our Lord visited Her, in Saint John’s house, it was with a group of angels who carried the badges of the Passion, but transfigured.

It was toward the evening, and the Holy Virgin passed about a half hour with Her divine Son. The angels sang, sometimes the alleluia, sometimes hymns of victory in honour of the Resurrection. Five minutes before the separation, they prostrated themselves with their faces to the ground to thus take part in the sorrow of the Virgin who was going to stay alone in sacrifice and bereavement.

Our Lord appeared to the holy women of the sepulchre who reached out to obtain some piece of His garment of Glory. Jesus replied that this garment could not be distributed on earth, but that He would adorn them in Heaven.

The Voice said that our Lord went, on the day of the Ascension, to sit at the right of His Father… He chose the land to become a place of wonders, above all at the approach of the end of times, in the years that would precede the great wars of the earth.

Our Lord has said:

I will make the earth My city. I will descend, at all times, to bring My orders. Before the great wars, there will be signs and warnings which will be more admirable and extended, as the end approaches on earth.

From the height of His glorious Resurrection, Christ gives a job to all His celestial court to warn, inform, and strengthen the earth. It is from this height that He watches the men prepare their march, with a view to overthrow the world. In His Glory, He will speak, and this march from the earth will stop: the just will triumph, the enemies will perish.

The Holy Ghost speaks of three different types of resurrections to Marie-Julie. First, there is the Resurrection of Christ our Lord, which Marie-Julie is shown first as a way to sustain her:

“This sight [Christ’s Resurrection] is like strong nutrition to sustain my soul during these other visions which will not be happy subjects.”

Secondly, she is shown the resurrection of the country of France, which we are warned will take a long time; that the loyal fighters will grow “old from fighting”.

“France, which will be delivered first in combat, will be the first in the tomb, but also the first to be resuscitated, according to the example of the Saviour who has announced and announces again that she [France] will come back to life.”

Thirdly, Marie-Julie is shown the resurrection of the Catholic Church:

“From the height of His glorious Resurrection, Christ gives a job to all His celestial court to warn, inform, and strengthen the earth. It is from this height that He watches the men prepare their march, with a view to overthrow the world.”

That overthrowing of the world is the restoration of the Seat of Saint Peter to the Successor of the one Papal Line going from Pope Pius XII to Pope Gregory XVII, and then on to His Successor, Pope Gregory XVIII.

The Church comes out of Her exile, and Catholicism is resurrected on earth.

"We declare, say, define and proclaim to every human creature that they by necessity for salvation are entirely subject to the Roman Pontiff ." - Decree of Pope Boniface VIII, Unam Sanctam, Nov. 18, 1302. Ex cathedra.