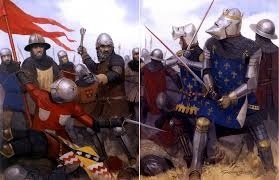 Saint Michael announces that the corpses of that King’s enemies will be trampled underfoot by all the great ones who will keep him company on the throne whence he is to establish peace and bring good to blossoming everywhere.

However, opponents will be left still standing, since the king is to come in at the height of the storm. He will be preserved safe and sound because the Mother of God is guarding him, as her own son, and has preserved him as an heir to a deserved crown which has been snatched away from him.

“The days of this exile will have cost a high price to this faithful and Catholic king. He will be so much the more rewarded for it. Let men have their saying and assert that he will never come along; then, question them about whether they are prophets.”

--As for us, we will say nothing, good Saint Michael.

“When the reign of that king happens to take place, France will be quite weakened, quite depopulated, but God is going to reward her with marvelous wonders. Peace will happily prevail everywhere.

“All the other powers (nations) will also receive their justice, after that awful misfortune reserved for France. Because this is a matter of a renewal for the whole universe. Chastisements from Divine Justice will take place everywhere. There are some powerful nations, whose names I withhold, who will have to suffer for long years.

“I think, says Saint Michael, that the Friends of the Cross have understood that their future will be secure and that they will have a special thought to give thanks to their beloved Mother.”

--Yes, on that day, all of us will present her…

For those of us who appreciate and love our holy friend, Marie-Julie Jahenny, I want to point out a comical situation that is taking place during this prophecy.

In her heart she is with us, fighting against the devil. But Saint Michael tells her twice "No, not you," and he seems very adamant with her the second time.

He means that this battle will take place after Marie-Julie's lifetime.

Yet, thinking of Marie-Julie's post-humous mission, (see prophecy of February 8, 2019), we her friends can well imagine that Marie-Julie also hopes to be there somehow, fighting in this final battle, perhaps bolstering the faith of those fighting for God...

This prophecy brings us into the reality of the upcoming war and the prophesied invasion of France (see Map).

At the beginning of this prophecy, we have the assurance that the enemies of Christ our Lord will be killed by leaders of armies who will join with the true French Monarch.

Through these victories, God's chosen French Monarch will “establish peace and bring good to blossoming everywhere.”

However, the time of the crowning of the true French Monarch will be a horrible time of war: “the king is to come in at the height of the storm.”

And so, during the beginning of his holy reign, “opponents will be left still standing…. France will be quite weakened, quite depopulated.”

The fighting will be fierce, but the Virgin Mary will protect this true monarch’s life: “He will be preserved safe and sound because the Mother of God is guarding him, as her own son”.

This time of the devil’s power on earth (since October 26, 1958) is a time of deeply-felt disappointments and great sufferings for Popes Gregory XVII and Gregory XVIII, the Church, the French Monarch, the French people, and all of the world.

For instance, one of the French Monarch’s sufferings is that he has been blocked (for most of his life) from taking the throne and helping his people because he is “an heir to a deserved crown which has been snatched away from him.”

Since the French Monarch is only able to come into power at the “height of the storm”, that is, during full war conditions in France (and perhaps elsewhere in Europe and the world), “[t]he days of this exile will have cost a high price to this faithful and Catholic king.”

But the true French Monarch is faithful to his people, and Catholic in his faith, so he bears his losses with faith and holy hope, which Heaven rewards: “He will be so much the more rewarded for it.”

God will turn suffering to good in the end.

We are to think of God’s Chastisements as “a renewal for the whole universe.”

These Chastisements “will take place everywhere”, and “some powerful nations will have to suffer for long years.” (This can be due to a great number of deaths, destruction of a great deal of infrastructure, or even the poisoning of the land through NBC warfare).

Saint Michael then fills us with holy hope when he calls true Catholics “the Friends of the Cross” and says that we will “have understood that [our] future will be secure and that [we] will have a special thought to give thanks to [our] beloved Mother.”

And it is only right to rely on our Holy Mother, for she is our powerful intercessor with God Almighty:

“Who is she who cometh forth as the morning rising, fair as the moon, bright as the sun, terrible as an army set in array?”

Immaculate Heart of Mary, be our protection!