DRENCHED WITH THE BLOOD OF CHRISTIANS 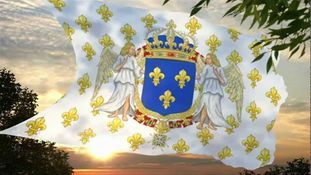 Soon a Catholic dawn will rise over France, which will restore the true Pope to the Seat of Saint Peter.

“The saviour’s banner will not see blood running, but it will see blood already shed and the soil drenched with the blood of Christians.

“My adorable voice assembles together My illiustrious and generous fighters. As of old, in various circumstances, it has made its choice of true and generous warriors.

“The man of faith who suffered and kept hoping in the depth of his exile, will arise, before years, as a shining bright lightning. He will await, on French soil, the coming of the victorious army over fear-struck enemies, under the dark sky.

“In My designs, the saviour is slumbering in exile, bending over the lily about which his mind dreamed so much. Under a pure sky studded with stars, he will bring forth a triumph over to My temple and will rest upon My Heart.

“Tears will run flowing upon earth, but Heaven will reward so many sufferings with the joyous solicitude of the true soldiers of the Cross. My people will devote themselves to My glory, supplied with the arms of the Archangel who promised to take their lead.

“The enemy will oppose the triumph of the illustrious conqueror. His armies will thirst for the blood of those My glory is calling on. But Heaven will strike them blind; a thunderbolt will hit them mercilessly.

It is to quite a long distance from the throne stained by the guilty man, and blemished over again by men still more guilty than he, that I am going to lead, under a cloud of triumph, My elect, on this French land where the enemies swore they would put to death the saviour of the kingdom. His name is written down in the golden book.

This prophecy identifies the prophesied French Monarch as the saviour of France (and indeed, he will also be the saviour of the Catholic Church, coming to the rescue of the Vicar of Christ).

And it is reaffirmed that when the French Monarch comes into power, France will have been “drenched with the blood of Christians”.

In order to help the French Monarch to rule an invaded France, God gathers His “illiustrious and generous fighters” who are “true and generous warriors.”

This invasion and killing of Christians seems to be worldwide, for this prophecy states that “[t]ears will run flowing upon earth”.

To alleviate this great worldwide suffering God gives “the joyous solicitude of the true soldiers of the Cross.”

God refers to these generous souls as “My people”, thus revealing that they will be men, women, and children. God reveals that they “will devote themselves to [His] glory”.

These true Catholic fighters will be guided and armed for battle by “the arms of the Archangel [Saint Michael] who promised to take their lead.”

The enemy and his armies with the evil hearts of their evil master, the devil, “thirst for the blood of those [God’s] glory is calling on.”

But God’s army of true Catholic fighters will not be harmed “Heaven will strike [God’s enemies] blind; a thunderbolt will hit them mercilessly.”

This thunderbolt could be a metaphor for a shock, such as the appearance of the exiled Pope and the Papal Restoration event.

Indeed, the appearance of the true Pope is described in this manner:

“The man of faith who suffered and kept hoping in the depth of his exile, will arise, before years, as a shining bright lightning.”

The true Pope is to come out of exile to be crowned as Pope “before years” which may simply signify before his years on earth are done.

The exiled true Pope “will await, on French soil, the coming of the victorious army over fear-struck enemies, under the dark sky.

The enemies may be “fear-struck” because they may be given the great grace to see that they have been working against God, operating in a spiritual darkness or “under the dark sky” of the devil’s dominion.

If these enemies cooperate with grace and convert, they will be saved; but if they continue in their blind pride, they will die outside of God’s grace, and go to hell.