ENCOUNTER ON THE SHORE OF THE GREAT TORRENT 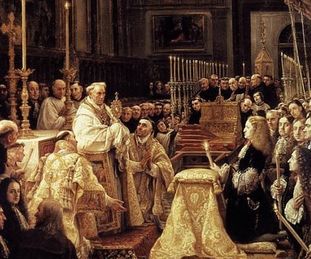 The true Pope will crown the French Monarch. This event that will usher in the glorious triumph of Holy Mother Church around the world!

“…He will come, the one longed after by the people of France. He will land upon that country with human armies, surrounded by Angelic Hosts. In the ranks of his armies, great Christians will be found, great men whose honor will be preserved for the whole duration of this world.”

Saint Louis, walking close to the See where he reigned, let three painful groans escape. When they will have completely entered that homeland, they will have come to a standstill in front of that seat of sin and treason.

With a voice causing one to tremble, the Lord says:

“My cursing is preserved for the one who, in a soon-to-come time, will take on that chair and take in hand the interests of his homeland.

“I let them take action: they will ascend that seat for very short hours and with a guilty and unfortunate honor. They will undergo the shame of defeat on the very road leading salvation back to the homeland. I will throw them down to the ground by blinding them with the fire from Heaven.”

NOTE: Here follows a description of battles on the shore of the Great Torrent, the purpose of which is to thwart the crossing of the big river from the envoy of the Lord and from his own. Adolphe Charbonnier’s text is too difficult to be deciphered for us to take the risk of supplying the details thereof.

…After she has contemplated them on the shore of the Great Torrent, the Immortal Queen of Heaven squeezed through those thousands of treacherous living, those blaspheming foreign troops. She said: “They shall not overcome.” Twice the Blessed Virgin turned in direction of the Lord’s children, and their battalions marched forward on. They all passed through without the enemy overthrowing one single man among the soldiers of the Cross.”

NOTE: There are still other battles in which are mentioned Orleans, the heights of Blois, the region of Sens and even “la Vienne”, a marching in direction of the Center (that is Paris): much too difficult to be deciphered.

“… The most resplendent moment was when the Christian ministers, who had all scattered around under the tigers’ gnaws, returned, through horrible roads, for the solemn day. Among the Lord’s ministers, friends to the King, I saw but four Bishops. The Blessed Virgin mentioned once again the name of the one who will be granted the honor of blessing and consecrating him at the middle point of the land at the Center.”     (September 5, 1882).

There is more than one man who is in line to be king of France, as a descendant of the martyred King Louis XVI, but only one will is the French Monarch who will fight the armies of antichrist and restore the exiled Pope to the Seat of Saint Peter.

Three men will take power in France, but only the French Monarch, the fourth to take power, will be the one chosen by Heaven. See link: http://www.mjjprophecy.com/page:9E933000-7AEE-4DB2-82F7-1E5CFFD4DA38"padding: 0px 0px 22px; margin-bottom: 0px; text-align: left; color: rgb(0, 0, 0); font-family: 'Open Sans'; font-size: 16px; letter-spacing: 0px; line-height: 1.36; font-weight: normal; font-style: normal; text-decoration: none solid rgb(0, 0, 0); text-shadow: none; text-transform: none; direction: ltr;" class="textnormal">The true French Monarch chosen by God for France and the Catholic Church does not live in France, but comes into France to help liberate France: “He will land upon that country”.

The French Monarch’s army is blessed by Heaven: it is “surrounded by Angelic Hosts”.

In fact, due to the direct intercession of the Blessed Virgin Mary, the French Monarch’s armies will be victorious: “They all [pass] through without the enemy overthrowing one single man among the soldiers of the Cross.”

This will be unheard of! These victories will be miraculous in the sight of men, and surely even some of the enemy soldiers will convert and join the French Monarch's armies!

In fact, a final Divine action will determine the final victory for the French Monarch and his armies which seems to be the 3 Days of Darkness:

"I will throw them down to the ground by blinding them with the fire from Heaven.”

This could be connected with the takeover of Catholic Church with the pushing aside of the Papacy on October 26, 1958, by forces from Germany (the leopard or tiger) and France (the rooster).

With time (years), the wayward prelates come under the rule of the true Pope, and into the Catholic Church “through horrible roads, for the solemn day” of the crowning of the true French Monarch by the true Pope.

What a shock the world will have when they realize who the real Pope is!

Sadly, few people are Catholics. They have been deceived by the false sects who claim a false Catholicism and love their independence from obedience to the true Pope.

(The falsehood that they follow is either the heretical belief that there is no Pope (the sedevacantists) or the following of the masonic usurpers who set themselves up in 1958 with anti-pope john 23 (the mason Angelo Roncalli).

The silent exile of the Papacy and the Church for so many decades results in a small Hierarchy: “Among the Lord’s ministers, friends to the King, I saw but four Bishops.”

One of these true Bishops, who will be the true Pope, who automatically has the title as the Bishop of Rome, will “be granted the honor of blessing and consecrating [God’s chosen French Monarch] at the middle point of [Paris].”

And, in little time, religious vocations will abound, and Catholics will populate the earth again. The Great Apostasy will be over!