THE LITURGY: A TEST FOR THE PRIESTHOOD 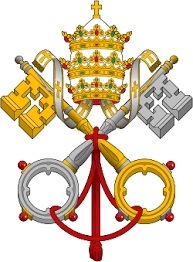 Without communion with the true Pope, there can be no sacramental graces. Pray for the restoration of the seat of Saint Peter to His Holiness Pope Gregory XVIII.

The fatal hour will arrive when My eternal priesthood will be put to the test.  These are the pages that will be given to celebrate in this Last Period.

I want to say that the First Period is that of My priesthood which exists after Me.  The Second Period is that of persecution, when the enemies of the Faith will formulate – and they will apply it strongly – these pages, such as the book of the second celebration.

I want to speak of these infamous spirits who have crucified Me anew and who await the reign of a new messiah to make them happy. Many holy Priests will refuse this book sealed by words from the abyss. Sadly, there will be those who will accept it, and it will be used.

Fr. Pierre Roberdel’s Note: It is a question, after some time of heathen canons… Who knows where the wish for renovation can lead?

Reflections on this prophecy:

Notice that there is no date given to this prophecy. In Le ciel en colloque avec Marie-Julie Jahenny, compiled by Fr. Pierre Roberdel, this short prophecy is grouped with two other similar prophecies that were recorded by Marie-Julie’s faithful friend and caregiver, Madame Gregoire, dated June 9, 1881.

This prophecy reveals that Holy Mother Church has two Periods: the first begins with the Priesthood after Christ’ Crucifixion, and the second begins with the takeover by judeo-masonry, beginning on October 26, 1958, a period which we are living through even today, and which is here referred to as “this Last Period”.

This Second Period has already had a “fatal hour” when Christ’s priests were “put to the test” and no sacrament given by a priest or bishop was left unaltered, when all were nullified except marriage.

It began with the pushing aside of the Papacy on October 26, 1958, and then, in 1965, the Holy Mass was replaced by the demonic atrocity that had been co-written by protestants hand-picked by anti-pope Montini. There exists a photo of Montini standing with them; you may recall it:

But how did they succeed?

Marie-Julie is told that the “enemies of the Faith will formulate – and they will apply it strongly – these pages, such as the book of the second celebration.”

To apply their changes strongly means that they threatened these priests and perhaps used other methods, such as mind control.

You will not think this such a far-fetched idea when you consider that there was a very important occurrence at the time of the opening of the diabolical V2 council:

Italy’s first mental hospital for the religious and priests was opened in Rome, at the site of the Priscilla Catacombs. (This hospital still exists today).

And anti-pope Roncalli, who opened V2, came for the official inauguration of this hospital on September 9, 1959!

This visit is commemorated on a plaque which speaks of the friendship of Roncalli and the “monsignor” put in charge of this hospital.

Indeed, the book I Quattro del Gesù speaks of this close friendship, from seminary days.

The Gesu was the church of the Society of Jesus (the Jesuits) in Rome, and the author mentions that these four friends met daily on this smaller plaza, standing outside to speak for much longer than they spent inside before the Blessed Sacrament in prayer.

The author also mentions that the head office of the communist party of Italy was just a few doors down.

Why does the author mention this detail? Did the communists perhaps have a part in the Exile of the Pope and the Church in 1958? Is the location of the Gesu -- implying a Jesuit connection -- an important hint?

This week's prophecy names the culprits of the takeover of 1958 as being another group of enemies of the Catholic Church, those “infamous spirits who have crucified Me anew and who await the reign of a new messiah to make them happy.”

But this “new messiah” will only be the anti-Christ!

We can rejoice and thank Christ our Lord for His holy Priests who “refuse[d] this book sealed by words from the abyss”.

These were the holy martyrs of the Second Period, and we should remember to pray to them to help us to be true to our Baptism!

Yes, we are living through the result of the lukewarm, and the false priests, as well as the newer non-ordained anti-priests who accepted the anti-mass and continue to use it, leading innocent souls into devil worship.

We suffer because we have beloved family and friends, co-workers and neighbours who are absolutely beguiled; this is a sad fact.

But we must not delve into self pity, that we feel alone!

We must put our daily efforts to prayer, and not stop praying for their conversions, because “this Last Period” had to come, it was prophesied, and we are the ones blessed to be chosen to live through it and to remain faithful to Holy Mother Church.

As the few Catholics left in this Last Period, we must focus on our daily prayers for conversions.

Our Lady of Victory, pray for us!