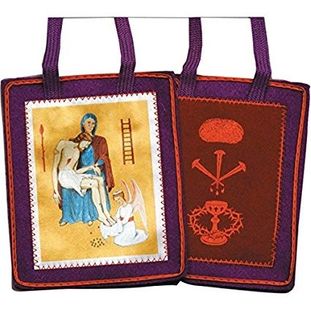 The Scapular of Benediction and Protection provides powerful protection!

“The hour for the battle is ready to strike. I will stand on the just men’s side. I will march along with them, under the banner of the Sacred Heart. We will meet headlong with the standard of hell. Which standard will report triumph?

“Ours will fall down to the ground. We will hold it just the same. Hell’s standard will not budge. It will remain lifted up while ours will lie prostrate.

After the standard of hell will have been victorious for a few months, then the Lord’s banner will rise again at its turn to also report triumph, but… it will fall down back again.

In that second fall, the result will be so great that the major part of the people will live, as of old, without any priest, without Mass, without receiving the Adorable Body.

--Oh! Holy Archangel, this is terrible just the same!

“I declare that there will never have existed a similar epoch. Never will have taken place so cruel a period… One has to expect it and make ready in order not to be taken by surprise.

All the demons are going to assemble: there are a great number of them under a human form… To be satiated they need the flesh of the Lord’s ministers, the flesh of Christians and blood proceeding from veins in which faith is flourishing.

--Saint Michael, you will not allow that to be done?

“The Lord is the one sending me out and charging me with all those warnings. I am bound to obey.”

--I, too, would prefer not to hear all that; but just like you, I want to obey.

In this prophecy, Saint Michael is again speaking with simple language to us, so that we may understand what God is ordering him to reveal to us through Marie-Julie Jahenny.

Truly, the October 26, 1958 exile of the just-elected Pope, His Holiness Gregory XVII, leaves hell’s standard “lifted up while ours… [remained]… prostrate.”

Yes, the Catholic faith has “fall[en] down to the ground” and so it is not easily found in books or in church buildings that claim to be Catholic, but “[w]e hold it [regardless of the difficulties].”

Yet, according to this prophecy, there are two occasions for losses and subsequent sufferings, and the “second fall” is much worse because it leaves the Faithful “without any priest, without Mass, without receiving the Adorable Body.”

Could this “second fall” be the vatican 2 (v2) council, which has initiated all of the changes which have nullified Catholic thought and Catholic sacraments, such as Holy Orders, and the Holy Sacrifice of the Mass?

The faithful have been given a false novus ordo (so-called by anti-pope paul 6) church, and today, their non-priests offer non-sacraments with no divine graces whatsoever.

To Marie-Julie’s shocked response (understandable, since she has lived a life surrounded by Catholicism), Saint Michael states unequivocally that “there never will have existed a similar epoch… so cruel a period.”

How is this period today “so cruel”?

Think of it this way: the satanic deception has robbed people and they have not even realized what has been taken from them.

This Great Apostasy has forced the true Holy Father, and thus also the Catholic Church, into an exile which has been truly silent, and therefore an invisible reality for almost 61 years.

This takeover happened because the majority of bishops and priests around the world readily and speedily began to preach satanic thinking as well as the need for obedience to all changes coming from the truly taken over “rome”.

Our Lady of La Salette warned us that the chief culprits of the coming spiritual chastisement would be the priests!

This week's prophecy presents us with an answer that is truly horrific: to be even possible as a simultaneous, global event which quickly destroys the Catholic faith in the hearts of billions of people as quickly as possible, the Catholic leadership below the Holy Father has to be taken over by a diabolical power.

Indeed, Saint Michael reveals to Marie-Julie that there are “a great number of [demons] under a human form”.

Their placement on the earth has been strategic, for maximum effect in walking people out of their faith through a misuse of the virtue of obedience.

Saint Michael states that these human-looking demons feed upon the flesh and the blood of “the Lord’s ministers…[and]… Christians… in which faith is flourishing.”

As horrible as it is to consider what this part of the prophecy is speaking about, and if it could be, in fact, real, a systematic murdering of prelates and priests and the taking over of their bodies would explain how so many bishops and priests around the world changed suddenly and began preaching the diabolical anti-Catholic false religion from the pulpits.

And people followed along because they were either ignorant, confused about obedience, bullied and humiliated, or perhaps also taken over by demons.

This news is horrifying, yes, but God always gives us a powerful means for our protection: the Holy Rosary is our weapon, and the Scapular of Benediction and Protection acts like a mighty shield.

The Blessed Virgin Mary has revealed this scapular to Marie-Julie Jahenny for these times, so that we may be protected.

We are even promised that if we are caught outdoors during the beginning of the 3 Days of Darkness and trying to get home, that this scapular will allow us to see as if it were daylight outside.

There are great graces to be obtained from this scapular!

Are you wearing the Scapular of Benediction and Protection? If you are not, look for it online.

Sorrowful and Immaculate Heart of Mary, pray for us!