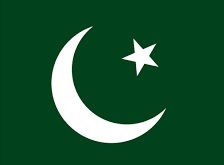 In this prophecy, Marie-Julie reveals that large numbers of muslims will live in France before the 3 Days of Darkness.

I see our Lord clad in splendor which the eyes of the soul have a hard time to stand. In a clear and resounding voice, He says these words:

All around the resting cloud, I see the whole Universe, all nations, all people of the earth. The Lord rises to Heaven, His hands pierced with a nail and says:

“Only very few steady places are left upon the universal earth. All nations will come out of their quiet and repose… My faithful people, henceforth your hope will not be waiting for long days. Ultimately, this hollow repose encloses a true deluge of iniquities, of loss and of inconceivable misfortunes.

Jesus lowers His hand to His chest and says:

“Within a few days, this region will be lost; there will be no more rest nor peace. All wills are treading on the edge of the abyss. Consequences of which are approaching.

“Henceforth, not a single day of rest will be left. The deluge of afflictions will stretch over the extension of My people’s land. The whole universe will be in uprise, before peace is restored to a quaking earth. Only one slight assault is left before everything is given over to a freedom which will not stop short of its end: on that spot where I will bring ungodly men to a standstill.

“…a light wind has taken the direction of the limits of the world and it blew over all the kingdoms. All of a sudden, by a divine command, men’s voices arose, as well of the good ones as of the wicked. They split apart, divided in two parties: the dignified and respectable party is composed of only a handful of true and steady fighters, while the other one consists of so dense a multitude that it would be impossible to number them…

“In the cloud, I gaze upon the threatened universe which is not left with eighteen months before God’s anger reveals its power. But before that period, hell on foot will have overthrown anything which causes one to live spiritually.

“You, My people, wait for the forthcoming resurrection, according to all the words I dropped under My workmen’s hands.

“My people, the laws are going to take their determination and France, before two years. –I will give you the appointed day – before two years have elapsed, France, will have almost entirely become mahomedan and without any religion. My people, so many times I told you that time was close at hand; but now is the time when I can tell you so.

“In the name of My Father’s powers, which are also My own, know that time is approaching when the earth will know of no more peace, when My people will see itself deprived of any shelter: the time when the curse will point out to the entrance into that terrible universal event.

“My people, rest assured and confirmed by My divine word: already the depth of afflictions, a legion of misfortunes, has spread over a large number of persons, in particular over the ambitious man who is expecting with impatience the moment when he will have a voice in the government and who is claiming for the extension of freedom.

“My people, you know beforehand, that before you enter glory, France had to suffer those afflictions, and you had to suffer them together with her, since you will have your share in its glorious resurrection in grace. Nobody can enter that visible glory which I am unceasingly announcing, unless he has suffered evils and tribulations.

“My people, says Jesus risen from the dead, now I am preparing your own resurrection and first of all the resurrection of this place, which will no more be yours, since you (Marie-Julie) you will be no more living. But at the time of the resurrection, I will send you, according to My own order, to bring, day after day, to My victims and servants the weapons of the true faith, in view of the true battle and the crowning of her who will become France once again. Never will her name have been so magnificent.”   (April 13, 1882)

(in the presence of the Charbonnier brothers and of the Jahenny father, mother and Angela).

This prophecy is not comforting to read, but it reveals important sequential information about the things that are to come next:

First, there is a warning of the destruction of the Holy Sacraments (the way for us Catholics to obtain sanctifying graces): enemies of Holy Mother Church will be permitted to “victoriously [trample] underfoot all the goods [God] created for the salvation of [God’s] people.”

Christ says that He will conquer these enemies “opposing the resurrection of the earth” after they have been victorious.

From a cloud, Marie-Julie sees how this destruction is worldwide: “I see the whole Universe, all nations, all people of the earth.”

Not only will we want Christ to come again soon, but our wait shall not be for much more time. “My faithful people, henceforth your hope will not be waiting for long days.”

We will yearn for Christ’s Second Coming because “there will be no more rest nor peace” anywhere on Earth.

Christ our Lord is adamant, saying: “Not a single day of rest will be left.”

And then, after this  “peace is restored to a quaking earth.”

How is peace restored at last?

The image makes us remember the book of the Evangelist Matthew, when the Angel is told to separate the cockle from the wheat only after the two have been allowed to grow to full maturity.

In this prophecy, this Angel is represented by a light wind which blows “over all the kingdoms” separating the good from the evil so that mankind is “divided into two parties”.

Those who are still faithful to God “[are] composed of only a handful of true and steady fighters.”

Those who are not with God are, sadly, “of so dense a multitude that it would be impossible to number them…”

We all know what has happened:

“Hell on foot will have overthrown anything which causes one to live spiritually.”

Well, this is what we are living today!

Christ warns the French that “before two years … France will have almost entirely become mohamedan [muslim] and without any religion.

This revelation to Marie-Julie relates the situation of France today in 2019 A.D.: that there is a very large number of muslims living in France, and that the Catholic Faith is, for the most part, not to be found among the French citizens.

And so, “the curse will point out [our] entrance into that terrible universal event" which is most probably the 3 Days of Darkness.

The “curse” may be an Old Testament reference to all muslims from the time of Abraham and the rejection of Hagar’s son, by God the Father, in favour of Sarah’s son.

And the consequences of living in a time when the Catholic Faith cannot be found, but the false faiths abound, is very serious for us:

With “no more peace, … [God’s] people will see itself deprived of any shelter.”

Our shelter is spiritual. It is the ability to receive the Holy Sacraments, the means by which our souls are cleansed of sin and fed with the Body, Blood, Soul, and Divinity of Christ our Lord.

Yes, it seems that this is to be taken away from us.

God's Will is that we suffer along with France because, as Christ explains in this prophecy, we will also “share in [France’s] glorious resurrection in grace.”

Christ does give us one consolation, one hope that we must try to remember always:

“Nobody can enter the visible glory which I am unceasingly announcing, unless he has suffered evils and tribulations.”

And Marie-Julie will have an important role. She will be sent to bring, “day after day, to My victims and servants the weapons of the true faith” so that France becomes “magnificent” once again.

France will lead in the universal restoration of the Catholic Faith.