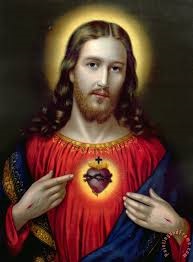 The Sacred Heart of Jesus speaks of the victorious French Monarch.

“My children, says the Lord, with all the tenderness of My Heart, I make it known to you: I want My faithful friends to be able, without any delay, to have embroidered, in view of welcoming the Exiled one from a foreign country, a white banner representing, on one side My divine Heart, and on the reverse side My most Blessed Immaculate Mother, the protectress of Her children and the Queen of France.

“My children, upon his arrival, the King will not take his residence at the Center. For a short while, he will have a temporary dwelling closer to Brittany, because the Center will be uninhabitable, up until the day when workmen will put their hands [to work] in order to remove the rubbish and set to order, after a dignified manner, the streets all filled with corpses which will have been left scattered around, without anybody picking them up.

“My children, yes, that will be with that rich banner, blessed by an illustrious high-ranking person, that [he] will come to the Shrine of the Cross, clad in a most high dignity of respect and faith. All My victims and servants will make their way onward to Brittany, carrying their white banner of salvation, at the lead of an escort magnificent but few in number: the escort to France’s Saviour.”

Happy Feast of the Sacred Heart of Jesus!

This week’s prophecy is a message told to Marie-Julie Jahenny by our Lord Jesus Christ.

The time spoken of comes after the war, for the Center (as Paris is called) is “uninhabitable” due to rotting corpses:

“[W]orkmen will put their hands [to work] in order to remove the rubbish and set to order, after a dignified manner, the streets all filled with corpses which will have been left scattered around without anybody picking them up.”

Faithful Frenchmen and true Catholics, who have been on the lookout for the French Monarch to save France and the Church, will have been preparing a most important embroidery:

“a white banner representing, on one side My divine Heart, and on the reverse side My most Blessed Immaculate Mother”.

Happy hearts will lift this banner high and carry it forward to recognize the true King of France with this most holy welcome!

Surely, the souls of all will jump with joy, filling eyes with tears at witnessing this most important moment pre-ordained and revealed by Jesus Christ through this prophecy of 1882.

After publicly recognizing the true king of France, all will escort him to Marie-Julie’s home, known in these prophecies as “the Shrine of the Cross”.

The true king, having lived a lifetime of rejection and exile, will at last experience the rightful “dignity of respect and faith” as the rightful King of France.

The French Monarch is here referred to by Christ our Lord as being the saviour of France because he will have fought bravely against the forces of the anti-christ. As the recognized Monarch, he will be escorted by all of Christ’s “victims and servants”, which makes a group that is truly “few in number” all the way to Brittany.

Heaven chose this heir to the throne for France, and he will come to be recognized by all his countrymen as their Monarch.

Through him, France will return to being a Catholic country, and the Papacy will also come out of the Silent Exile to teach from the Chair of Saint Peter, and be a light for the world once again!