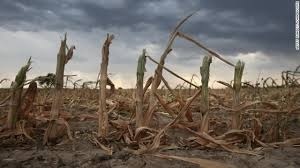 “In a hundred years, how many things will not exist any more! Do you know, my child, whether the earth will still exist?”

“The earth, my dear child, will already be far away! In a hundred years, Heaven will have collected Its crop. Do you believe, from all the confidences my Son has revealed to you, that the end of times will still be long coming?”

--I know nothing about it.

--Well, Mother, I think that before a hundred years no earth will be left.

“Even before the deadline of those hundred years, nobody will hunger any more, nor gather crops from the fields. Believe in it as in your Creed.”

The first thing of note about this week's prophecy is that it is given on the feast day of Saint Joseph.

--Recall that Saint Joseph is our strong advocate for these times, as he is the Patron of the Catholic Church and a Saint who is able to help us with any problem. As the foster father of Jesus Christ, he is beloved and listened to when he advocates for us.

Surely, with Russia’s high-tech nuclear missiles and the ever-growing violence in the Middle East, we are close to a Third World War.

In our distress, we might begin to look to the prophecies of Marie-Julie and other approved Catholic prophecies in order to determine dates.

But dates for future events can be delayed by prayers and penances.

Think of how Marie-Julie herself extended her sufferings for decades in order to delay the coming of the 3 Days of Darkness.

Specific dates can never be counted on to be exact. This is why Marie-Julie says, “No, Mother, I do not know the date of times.”

The Blessed Virgin’s reference to 100 years into the future (from 1878 to 1978) is truly meant to serve as a warning to those who are still in the false Vatican II “Church”.

Our Holy Mother tries to alert her children who are still spiritually asleep, unaware that the true Pope and the One Holy Catholic and Apostolic Church have been forced into exile and ARE NO LONGER IN ROME:

“In a hundred years from now, how many things will not exist any more!”

We know, with pained hearts, that the Virgin Mary is referring to a Pope that is not to be seen, and Holy Sacraments that are not to be found.

It is our Catholic sacramental way of life that does not exist anymore.

Being out of communion with the exiled Papacy, we are exiled from God Himself.

Where is the Papacy in Exile? We do not know.

Our Catholic Faith teaches us that we have Popes in perpetuity; that there is a Pope until the end of time.

It is a dogma of the Faith.

As Catholics, we must unite our prayers to the Vicar of Christ, and to His Hierarchy, wherever they may be.

And we pray, we make penances, and we say Acts of Contrition begging Christ our Lord to forgive us our sins—it is impossible not to sin when we are surrounded by sinful attitudes, rampant immorality, vulgar attacks on Christ’s Divinity, the constant cursing of His Holy Name (a satanic fury) and attacks against the virtues and against those who love Christ.

Marie-Julie knows of the dire situation for all souls, and of our torments. Christ has shown her all.

By 1878, she is aware of the devastation caused by the masons in their silent takeover of the Catholic Church on October 26, 1958. (See Pope Gregory XVII)

This is why, when pressed for an answer, she says, “Well, Mother, I think that before a hundred years no earth will be left.”

Does Marie-Julie mean nuclear destruction or does she mean the spiritual death of all Catholics on earth?

Our Blessed Mother’s answer clarifies that they are speaking of spiritual death:

“… [N]obody will hunger any more, nor gather crops from the fields. Believe in it as in your Creed.”

Nobody hungers for the Truth, nobody wants to live the Roman Catholic Faith; truly, an ever-growing number of souls refuse to recognize God.

Perhaps you noticed the absolute absence of Christ from this Christmas—more so than ever before!

Souls have forgotten the reality of God, and the necessity of the Papacy for the distribution of sanctifying grace: “… [N]obody will hunger any more”.

People worship themselves and they do not want to be under obedience to the true Papacy. They ignore that they only have spiritual life through Holy Sacraments, which must come through the Vicar of Christ, the Pope.

And nobody gathers from the vineyard of the Lord: “…[Nobody] gather[s] crops from the fields”. (See LA SALETTE).

There are no true Roman Catholic vocations.

First of all, older, truly ordained priests and truly consecrated bishops think they can exist without the True Pope or they do not realize about the silent takeover of 1958, and have embraced the false religion. Regardless, they are outside Holy Mother Church and we may not go to them for our Holy Sacraments.

These older priests and bishops must be found and told the truth about Pope Gregory XVII.

And yes, we can expect that there are priests, and bishops who know the true situation but will not sacrifice their "freedoms" so that souls can be saved from an eternity in Hell.

We must pray for these older apostate priests and bishops to realize the Truth and return to the Catholic Faith.

Secondly, with the Papacy in a silent exile, true ordinations and consecrations have stopped, but few have noticed.

This is why there are no true Priests or Bishops to model and teach the Catholic Faith, to convert souls to God, to console us, to bring us spiritual graces through the Holy Sacraments and, in particular, through the daily offering of the Holy Sacrifice of the Mass around the world.

For this same reason, there are no true Roman Catholic religious to model and teach the Catholic Faith to our children and to care for us in our once-Catholic hospitals.

All has been neglected. The vineyard of the Lord is forgotten.

Immaculate Heart of Mary, be our protection, for we perish!

Open our eyes so that we may see how we have made idols of ourselves!