THE PRIESTHOOD, Part 1 of 3 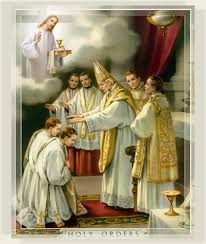 “Today very few people respect My Priests. I want the dignity with which they are clothed to be respected throughout the world. The Lord has not sent His Angels from heaven to exercise the holy functions on earth. He wanted to look for men worthy of being called Angels of the Altar, among His children of the earth, men who would be worthy to immolate His Divine Body each morning.”

I was present at the Cenacle, says Marie-Julie, when the Lord gave to His Apostles the authority to exercise the august Mystery on earth, and all of the graces which follow.

At the moment when the Lord had bestowed the Sacrament of Holy Orders, I saw the Sacred Heart and the mouth of Our Lord surrounded by a luminous cloud which the eyes of the soul were barely able to sustain. The Apostles were enveloped in this Divine Light.

I then saw, leaving from the holy chest of the Saviour, something that looked like a case loaded with grain. I heard that He said to me this word:

This prophecy is truly a prophecy for our times!

Herein we learn how the Holy Catholic Faith will spread the fruits of “hope and faith” via “the hearts of Christians”; that is, by means of true Roman Catholic hearts, until the end of time!

But these fruits of the Holy Ghost first come to us through Christ’s Holy Priesthood.

So let us look first at what we are told about the Holy Priesthood:

This prophecy was given in 1882, and even then, Christ our Lord was complaining that “very few people respect [His] Priests”.

How much worse is the state of the Priesthood in this year 2020!

The first major triumph of the agents of evil is with the 1958 masonic takeover of the Papacy.

Then the invalidation of Holy Orders takes place in the Roman Rite (October 1968).

In this week’s prophecy, Christ our Lord says that He “want[s] the dignity with which [His Priests] are clothed to be respected throughout the world… [because He] has not [even] sent His Angels from heaven to exercise the holy functions [of the Priesthood] on earth.”

Christ our Lord is bringing to our attention that He has given His Priests a divine mission on earth, a sacred function.

Priests are men set apart from you and me. They are intermediaries with God Himself for all mankind.

The enemies had to work long and hard before the 1958 takeover of the Papacy in order to ensure that they would have agents of evil in strategic places throughout dioceses around the world.

Any of us who have read the not-so-fictitious book, AAl025,  and come to this point in time, understand very well how the seminaries were infiltrated by Christ’s masonic enemies and how false priests were put into positions of power throughout the world, in order to force false obedience upon every parishioner that they could. Those who knew to hold on to the Roman Catholic Faith were severely ostracized, made into public examples of shame, so that other parishioners would obey.

But the hearts of the True Priests are so very different from the vicious hearts of false ‘priests’!

In this week’s prophecy, Marie-Julie tells us that Christ our Lord “wanted to look for men worthy of being called Angels of the Altar, among His children of the earth, men who would be worthy to immolate His Divine Body each morning.”

Our question, as we languish for the graces from the Holy Priesthood is, where are they now?

Are truly ordained Priests to be found?

Yes, but consider the consequences of battle: the soldiers remaining are injured; and some of them are severely injured, and near death.

In this battle for souls, the injuries are spiritual.

Do you feel inspired to do triage? It would be a true work of Mercy, so let us consider the truly ordained Priests who are currently on this earth:

Those truly ordained into the Priesthood through the Latin Rite were ordained before October 1968, so they are elderly indeed today. (Priests were normally ordained at 24 to 27 years of age, which would put most true Priests at 76 to 79 years of age or older).

The problem with these priests is that they are apostate, since they have fallen into the false church, obeying masonic anti-popes and practising masonic rituals rather than Roman Catholic Sacraments.

By following the sacrilegious changes to the Holy Sacrifice of the Mass, they have incurred the wrath God and of Saints Peter and Paul (from Pope Pius V’s Papal Bull, “Quo Primum”).

We can expect that these elderly truly ordained Priests will also be heretical, believing at least one anti-dogma espoused by the masonic v2 church of satan.

So, in speaking with them, we must explore the Roman Catholic Catechism and Dogmas, and we must continue to pray for their conversions.

The “fruits of hope and faith” previously planted in our hearts by True Priests, may give the fallen Priests the graces they need to convert, even if it is a deathbed conversion!

For those of us with the Roman Catholic Faith, their spiritual wounds will have an unbearable or shocking stench that we will hardly be able to stomach!

So we must pray with sincere compassion and love, because Christ loved them enough to give them this exalted status above the common man, and they were once so close to Christ's Sacred Heart.

There are also truly ordained Priests in the Byzantine Rite and other Eastern Catholic Rites, because they have not made changes to the Sacrament of Holy Orders.

These truly ordained Priests will be from young to old; however, they are also more than likely apostate priests because they either follow the masonic anti-popes in Rome or else they believe that there is no pope on earth (which is a denial of the Dogma that there will be Popes in perpetuity—which means until the end of time).

We must pray for their conversions also!

Like the Latin Rite Priests, the Byzantine and Eastern Catholic Rite Priests, and especially the younger ones, may be able to be converted from their apostasy and any currently popular heresies; but it will take time and much penances and prayers!

Their sufferings of takeover under the communist regimes in their countries meant the murders of many Eastern Catholic Bishops and Priests.

Theirs is a decimated number of Prelates and Priests, and we have to be on our guard, as some of them will be two-faced (diabolical) communist infiltrators/agents, and they will cause deep spiritual wounds to Roman Catholic souls.

All truly ordained Priests carry the indelible mark of the Priesthood on their souls for all eternity. If they go to hell, theirs will be a particularly excruciating eternity in the everlasting flames.

After a million years, eternity will just be beginning...

We must have compassion and pray for the conversion and salvation of truly ordained Priests every day, with every holy rosary!

This week’s prophecy shows us the sacred character of the Priesthood of Christ.

Marie-Julie is allowed to see (with the eyes of her soul) what takes place in the Cenacle, the upper room, when the Resurrected Christ gives His Apostles their Holy Orders, by breathing the Holy Ghost onto them (John 20:19-24).

She sees Christ give “to His Apostles the authority to exercise the august Mystery on earth, and all of the graces which follow.”

She sees Christ’s Sacred Heart and His mouth “surrounded by a luminous [bright] cloud which the eyes of [her] soul [are] barely able to sustain.”

She sees that “[t]he Apostles [are] enveloped in this Divine Light.”

And then she sees “leaving from the holy chest of the Saviour, something that looked like a case loaded with grain.”

These grains represent the Holy Catholic Faith: “This grain, it is the word that they will disperse in the Church even to the end of time.”

And it is from these “hearts of Christians”, which are “the fields into which these blessed grains will fall”, that mankind will have “fruit in hope and faith.”

In these times of no Holy Sacraments for the Faithful, our hearts will still bear the fruits of the Holy Ghost: “hope and faith” and with these fruits we will be able to be Christ bearers to others!

We have had the Holy Roman Catholic Faith planted into the field of our hearts by holy Priests, and thanks to their divine actions in our souls, we are able to feed others from these spiritual fruits!

Are you afraid that you cannot share your Hope and Faith with others? Don’t be afraid! The Holy Ghost will guide you!

Now is a good time to review and practice the prayer that our good friend Marie-Julie prayed daily to the Holy Ghost:

A reminder for this time of the spreading of this deadly flu or biological weapon:

Remember to ask Christ Our Lord to bless your water and food by dipping a small metal or cardboard Crucifix and Sacred Heart medal into water. Even a drop of water on our food will save us from the plague! For more details, see the link below!

Mary, Help of Christians, pray for us!