THE PRIESTHOOD, Part 2 of 3 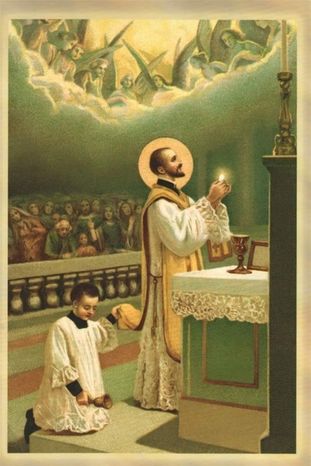 Then, in the Cenacle [the upper room], the Lord showed me an Angel and one of His ministers, a mortal man of the earth. The Angel was to His right side and the minister next to His Divine Heart, which resembled a furnace.

The Lord tells me :

«Here is an Angel of Heaven, who is not mortal, and here my Apostle on earth, a mortal man, dressed in holy dignities.”

The Angel remained kneeling at the feet of the Divine Master, but the Priest stayed standing in front of Our Lord, who placed His right hand on the chest of the Priest.

“This heart,” He says, “will live eternally. Without doubt, as with other human hearts, it will rest in the sleep of rest, but the link which has united him to the Church will never be broken, not even after life in this world. The heart of the Priest is the living altar upon which I spread the gifts of holiness. The corruption of death will not penetrate it.”

The Angel remains kneeling, and the Priest standing, when Our Lord, by His infinite power, parted the chest of the Priest. He showed me a small chain which left the heart of the Priest to go lose itself in Christ’s Sacred Heart.

He says to me:

“My daughter, the Church has come from the depth of My holy chest. My Heart was the source of Her fertility and love.”

Our Lord tells me again:

“You see all of the movements of grace which arise from My chest. All of the flames which rise the highest. There are as many holy unions which I contract with My Apostles on the earth.

“I dress them with all that I possess. I give them all ; and they begin to resemble Me Myself. My actions, My powers, My dignities ; in a word, all that My Father has given Me, I give to My Apostles on earth.

“It is no longer a man who lives in this mortal flesh, it is Me, the Son of God, the Immolated Sovereign Priest; it is Me who lives in My ministers on earth.

“The Priest is no longer a man living on earth; it is me, the eternal sovereign Priest who have put on him.”

After these words, other Angels came to join he who was kneeling. The life of the Priest, dressed by a brilliant dignity, made the angelic troop shed tears, but silence reigned among them.

“I want that the greatest respect be given to My Apostles. Otherwise it is I who will be offended by they who lack respect for them. Misfortune to they who despise them! For such a one, there will be much difficulty to obtain forgiveness for this sin of contempt.”

Did you ever know a true Priest?

What qualities do you remember as you think back?

Was there an angelic smile, a child-like sparkle to the eyes which spoke of purity of life?

Was he the most compassionate of fathers to you as you confessed your sins?

Was he interested in your soul? Did he care deeply for his flock?

Did he live a penitential life, not just during Lent, but always?

When missing that Roman Catholic Priest most, do you wish you could have just one more conversation with him, one more time to ask for advice?

Do you pray to him and ask him to intercede for your intentions?

Do you pray for the repose of his soul?

This week’s prophecy describes a true Priest of the Roman Catholic Church. Let us look at how Christ our Lord describes His true Priests:

“This heart, … will live eternally.”

“The heart of the Priest is the living altar upon which I spread the gifts of holiness.”

“[T]he link which has united him to the Church will never be broken, not even after life in this world.”

“I dress them with all that I possess.”

“I give them all; and they begin to resemble Me Myself.”

“It is no longer a man who lives in this mortal flesh, it is Me, the Son of God, the Immolated Sovereign Priest”.

This week’s post this not meant as a sad funeral hymn for the absence of holy, true Roman Catholic Priests. This post is meant to inspire those young hearts who will be called to this holy and everlasting Priesthood once again.

Marie-Julie was told that there will be a surge of holy vocations, both for the Priesthood and for the religious life, after the 3 Days of Darkness, after the true Holy Father is placed once again on the Chair of Saint Peter.

The Papal Restoration will return all spiritual graces to a chastised and better humankind.

The holy Priesthood of Christ will return once again, and flourish!

It is “[Christ] who lives in [His] ministers on earth.”

“My daughter, the Church has come from the depth of My holy chest. My Heart was the source of Her fertility and love.”

Marie-Julie’s home will become a pilgrimage site, and there will be true Roman Catholic Priests to give absolution for sins, and to bring the other Sacramental Graces to our souls.

What a time of rejoicing both in Heaven and on earth!

Are we to keep silent then about, say, Karol Wotyla JPII, ordained in the old rite? May God forgive me.