THE PRIESTHOOD, Part 3 of 3 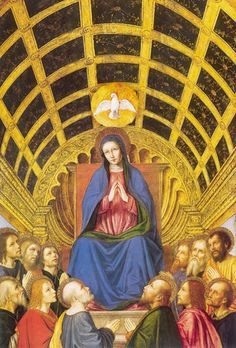 I see the Blessed Virgin approach the Apostles…

She who had wept much while our Lord said His goodbyes, because there was not much hope of keeping Him on earth, she passed by the Angels and placed herself in front of the Apostles.

“Here is the living and holy Church to which, before the person of my Son, I submit myself with a most holy and just obedience.”

And casting her eyes over the fingers of the Apostles, she adds:

“Here are the hands which will touch His Most Holy Body, and that will give Him to me in my mouth. These hands are the self-same hands of my Son; they will be raised to bless me, like the hands of my Son blessed me when I entered the cenacle [the upper room].

Reflection on this vision:

This vision contains much for deep reflection.

As the Blessed Virgin Mary moves past the Angels to “[place] herself in front of [Christ’s Twelve] Apostles” we see her as Queen of the Apostles, taking her rightful place as their divine Protectress, and the Queen of all future Apostles.

True Bishops and true Priests will keep our Blessed Mother always in their minds and hearts; they will follow her directives, her advice, because they are loyal to the Mother of God, as their Queen.

This vision, told by Marie-Julie, is in the past tense as an event that happened and is now an established fact:

The Mother of God became the Queen of the Apostles.

And what the Blessed Virgin Mary says is in the present tense, because she is speaking of the Roman Catholic Church, which is a living creation that will endure until the Second Coming of Christ to judge the living and the dead:

“Here is the living and holy Church, to which, before the person of my Son, I submit myself with a most holy and just obedience.”

First, consider that the Roman Catholic Church is “holy” because She was established by Christ our Lord, who is God the Son.

This is the only Church established by God Himself, other than the Hebrew religion of old, which lived while the First Covenant between God and mankind remained intact; that is, until the ripping of the cloth venerated as the Holy of Holies in that old religion.

The Holy Roman Catholic Church is “living” because She is the New and Everlasting Covenant between God and mankind.

She is “living” because the graces from Christ’s Precious Blood, shed during His Passion and Crucifixion, are eternally meritorious of all graces from God.

She is “living” because the Papacy, Christ’s true lineage of Vicars through whom all of these graces are to be given to mankind, is a lineage in perpetuity; that is, until the Second Coming of Jesus Christ.

She is “living” through the Apostles, the Bishops, who are obedient to the Vicar of Christ.

And even today, in enduring this time of Exile, the Holy Roman Catholic Church is “living” in Her exiled Papacy.

What are we to do as we await the Papal Restoration of the rightful Pope to the Chair of Saint Peter?

Let us look to the Blessed Virgin Mary so that, as her children, we may imitate what our holy Mother does:

The Blessed Virgin Mary stands before her Crucified Son, “before the person of [her] Son,” and “submits herself to [the Roman Catholic Church] with a most holy and just obedience.”

So yes, we are to “submit” ourselves to the exiled Papacy as this is God’s Divine Will; the true Pope, Successor of Pope Gregory XVII, is in exile.

We are to look unceasingly upon Christ our Lord’s Crucifixion as we unite our sufferings with His and accept God the Father’s Divine Will for these times.

We are to live our lives as Roman Catholics should; that is, “with a most holy and just obedience.”

This is our mandate as Roman Catholics.

This is what our Mother, the Blessed Virgin Mary does.

So, let us look to our Mother!

She follows the Church established by her Son, Christ our Lord, because she is following the Twelve Apostles, the first fathers who passed on the Faith and the Sacramental Life given to us by Christ our Lord.

The Blessed Virgin Mother teaches us a sublime truth as she looks at the consecrated hands of the Twelve Apostles, saying:

“Here are the hands which will touch His Most Holy Body, and that will give Him to me in my mouth.”

She who was conceived without sin may not touch “[Christ’s] Most Holy Body” because her hands have not been consecrated!

Our Lady was holy, but as a woman she was not called to the holy Priesthood.

And thus, without consecrated hands, the Mother of God received her Son, in Holy Communion, “in [her] mouth”.

In the consecrated hands of the Apostles, the Mother of God sees the Hands of her own Son: “These hands are the self-same hands of my Son”.

The Holy Sacraments, as well as daily prayers, give many occasions for these blessings at the hands of the true Pope, Bishops, and Priests.

As it is not God’s Holy Will that we receive these blessings in person in these times of Holy Chastisement, let us daily send our Guardian Angels to the daily Holy Mass of the Pope in Exile, in order to carry Christ’s precious blessings to our souls.

As well, think of how many times our Holy Father must be daily raising his venerable hands to bless us!

It would be wise to ask our Guardian Angels to collect these many daily blessings for us, so that we may grow in holiness, walking in Heaven’s light even amid the darkness that is the constant confusion of other souls.

May the light of our gathered blessings shine the way for everyone around us!