A LOWLY, BUT NECESSARY, JOB 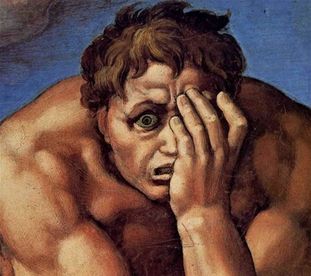 [This painting is in the Sistine Chapel. It is called The Final Judgment,  by Michelangelo, and it clearly depicts a mason -- note the covered half of the face -- clearly afraid of his own eternity].

The Holy Virgin is sad. She says:

--“My well-beloved Son, Thy Justice is very great. Will not the entirety of France extinguish itself?”

--“Ah! my Son, what a great number of dead bodies! One more time again, have pity! I implore Thy pardon.”

The Lord resumes in an irritated voice:

“Yes, guilty France does not have more than a small germ of life. She will not be extinguished since I have promised to save her… But Mother, France will be called the field of tombs.

“You, My Archangel Saint Michael, you will be in charge of a very low job. You will be obliged to obey, just as, in a large property, servants obey when the master commands them to remove the fallen leaves from the trees, out of fear that the plants not perish.”

“Lord, I will obey Thy orders.”

“Yours will be the lowest of jobs: you will be obliged to clean France of the infected cadavers.”

-       “My victim, would you rather instead see all of the faithful souls be corrupted by the many evils?”

-       “However, here is what will happen if I do not return at the hour that I have indicated. I am the only resource. Sadly, men do not count any more than the rocks of the road.”

The Justice of God is coming. This has already been told in detail, for years, to Marie-Julie Jahenny, whose sufferings have delayed the coming of the Divine Chastisement to our time.

This Divine Chastisement which is coming cannot be stopped, not even by the Mother of Christ our Lord.

In this week’s prophecy, the Blessed Virgin Mary points out that the Divine Chastisement will be a very great Chastisement, possibly leaving no French person alive:

“My well-beloved Son, Thy Justice is very great. Will not the entirety of France extinguish itself?”

Christ’s answer is no. There will be two kinds of survivors:

The first kind of survivors will be “those who will take shelter under the tree of My Cross”.

How may we identify who they are?

Those who were first under the Holy Cross of our Saviour were the Blessed Virgin Mary, Saint John, and Saint Mary Magdalene.

It is only the Roman Catholic Church which comes from the fruits of the Crucifixion, since the Hebrews rejected Jesus Christ, and the various Protestant sects have rejected Christ’s Vicars, the Papacy, and formed their own false churches.

No, because the Vatican City has been taken over by masonic enemies since October 28, 1958, so that many persons who call themselves Roman Catholics are actually following a long line of masonic anti-popes which begin with Angelo Roncalli (John xxiii) and lead to the current anti-pope, Jorge Bergoglio (Francis i).

Others deny the dogma of the perpetuity of the Papacy, and say that there is no Pope.

The actual Roman Catholics today are we who are in actual or spiritual communion with the exiled Holy Father, the one and only true Vicar of Christ, coming from the one Roman Catholic lineage of Pope Gregory XVII, through Pope Pius XII.

The Chair of Saint Peter will be restored (given to this exiled Successor of the Roman Catholic Papacy) by the French Monarch, and the Holy Roman Catholic Church will flourish upon this world again.

The second type of survivors are any persons who will be living in Brittany, France: “those who will take their refuge in Brittany.”

But let us be very clear, for the sake of those who are new readers of this blog. Marie-Julie Jahenny, a simple, uneducated country girl born in 1850 was told of events within the context of what she could understand: France.

The Divine Chastisement that is being discussed in this week’s prophecy refers to the survivors who will take up residence in Brittany, and we understand that the Chastisement is the 3 Days of Darkness, a worldwide punishment from which two-thirds of humanity will die.

And this is why the Virgin Mary is so very sad at the beginning of this week’s prophecy.

She who wants all souls to be saved, especially those who are being misled by the satanic confusion, knows that many will die outside of the Church if they die before the Papal Restoration:

--“Ah! my Son, what a great number of dead bodies! One more time again, have pity! I implore Thy pardon.”

Christ our Lord understands very well that most souls are outside the Church which He established for the salvation of mankind, the Holy Roman Catholic Church.

Christ knows well that France itself had a large part in the masonic takeover of the Papacy and the spiritual confusion which has resulted, and so He says:

“Yes, guilty France does not have more than a small germ of life. She will not be extinguished since I have promised to save her… But Mother, France will be called the field of tombs.”

This country, which was once called the Eldest Daughter of the Church when under the rule of her Roman Catholic kings is now to be severely punished for her crimes against their monarchy and against Christ’s Church.

And the “low job” of cleaning up France of the “infected cadavers” belongs to Saint Michael the Archangel.

These dead are the spiritually dead, who are to be removed so that they do not corrupt those of good will who are to live to see the glory of the Papal Restoration.

As Christ Himself says to Marie-Julie: “My victim, would you rather instead see all of the faithful souls be corrupted by the many evils?”

Let us praise the wisdom of our Loving God who became man and died for us the ignominious death of the Crucifixion.

To Him be all praise and glory, for His Sacred Heart sustains us!

May we hold our hearts and minds in peace, because God knows all.

And, like the Blessed Virgin Mary and Marie-Julie, may we beg our Lord for His Mercy for the conversion of our loved ones and those souls who would convert if given the time to understand the Truth and to live by the Truth.