A PROMISE OF OLD (FOR US TODAY) 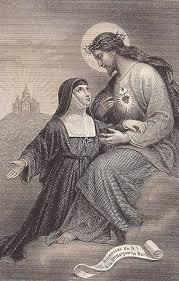 Blessed Margaret Mary is kneeling, at the foot of the Sacred Heart banner, held by Saint Michael. The Lord points to the Wound of His Sacred Heart and says:

“My children, My divine Heart has the privilege of all graces. There lies the triumph. But, before I give you that triumph, I want to put you to the test. Many evils I will send unto you: you shall see My Justice falling down upon earth; in the sky you shall also see bright forerunning signs appearing.

“I had promised the blessed victim of My Sacred Heart (Margaret-Mary Alacoque). I would grant triumph to France, through My Sacred Heart, but on the condition all children of France would have been submissive. If they had remained slothful and ungrateful, chastisements would be more terrible.

“I had promised that, perhaps, I might have delayed for two hundred years, perhaps still more. If My people had been docile, I would have granted triumph sooner… It has not been docile: I have kept waiting. But… triumph will take place. My victim, keep that in your mind.

He goes on saying:

“The victim of My Sacred Heart has been unable to pass along all of My revelations. This is the reason why, at present, I want to forewarn My people, so that they may be prepared when the hour of My Justice is up.

“I had promised France’s triumph would take place after great chastisement; which revelation has not been delivered.

“Several saintly souls had been given the announcement that, before France’s triumph, a great rebellion would take place among all My children. They will attempt to debase everything on earth which is worthy of respect: but that will be in vain.”

“Guilty France, can you not see the tomb which lies open in which to pile up the victims of crime?... Do you not see the fatal hour, which is growing? That will be the devil’s hour. He is going to throw the poisoned breath of his anger at My Face.

“My children, I forewarn you: Satan will quench his rage which is so much the greater because his own shall be conquered. I want to humiliate My people: they paid no heed to My words. Afterwards, I will grant complete victory.

The image at the beginning of this week’s prophecy is one of what perfect obedience to the Sacred Heart of Jesus looks like: “Saint Margaret Mary [Alacoque] is kneeling at the foot of the Sacred Heart banner, held by Saint Michael.”

But what follows is a reflection of our diabolically scarred world. Many evils have been sent to us: “[Y]ou shall see My Justice falling down upon earth; in the sky you shall also see bright forerunning signs appearing.”

But we are to remember that God has allowed our sufferings for our own sanctification: “I want to put you to the test.”

Why? First, because we must be purified for the victory which will be ours: “My divine Heart holds the privilege of all graces. There lies My triumph.”

Secondly, we must be prepared for the suffering that comes from battle, the sacrifices. We must be war-hardened for spiritual battle.

The Sacred Heart has waited patiently for mankind to become “submissive…. docile” to His Divine promptings, but mankind has “remained slothful and ungrateful”.

Mankind has been such an obstacle to the Sacred Heart of Jesus that Sister Margaret-Mary Alacoque “has been unable to pass along all… revelations.”

Soon, the Divine punishments will come: “I want to forewarn My people, so that they may be prepared when the hour of My Justice is up.”

One important revelation which has been blocked is that “France’s triumph [will] take place after great chastisements.”

And what is the sign that will come before these great chastisements? Shockingly, it has already happened; the sign was Vatican II (V2):

“[A] great rebellion would take place among all My children.” [Yes! Among Roman Catholics!].

“They will attempt to debase everything on earth which is worthy of respect [the overthrow of the Papacy and the pushing aside of Christ’s teachings]”.

However, the V2 revolution “will be in vain.”

And who allowed this revolution to begin?

The victims of crime have been many (and continue to be many) since the pushing aside of the Papacy and the Roman Catholic sacraments.

Think about what graces existed prior to October 26, 1958.

We used to have valid and licit (true and legal) offerings of Christ’s Holy Sacrifice at every hour of every day and night, around the world.

And now, in this year 2020, we are facing the disappearance of 7 million children per year due to sex trafficking. Many are used since they are babies!

We must truly be living through “the devil’s hour.”

The devil is “throw[ing] the poisoned breath of his anger at Christ’s face.”

Satan is “quench[ing] his rage which is so much the greater because his own shall be conquered.

Have you ever wondered why God allowed the devil to rule, giving him a hundred years?

The answer is in this prophecy:

“I want to humiliate My people: they paid no heed to My words.”

God has allowed us to live these times, to suffer this satanic power over us in order to bring us closer to His Omnipotence, to purify us.

This chastisement is soon ending, however: “[a]fterwards, I will grant complete victory.”

Brave men and women are fighting for good. God is cleaning house.

Soon, the French Monarch’s “white banner will be implanted in France, and its enemies will be bound to live under its domination.”

Yes, the great day is coming.

The true Successor of Pope Gregory XVII, of the only papal lineage to Saint Peter, will crown the French Monarch

In return, the French Monarch will put the Pope on the Chair of Saint Peter to be a light to the world once again.

The Holy Roman Catholic Faith shall flourish once again!

New video for storage of batteries, radios, and Steri-pen can now be viewed on Youtube. Click on this link: EMP & Power