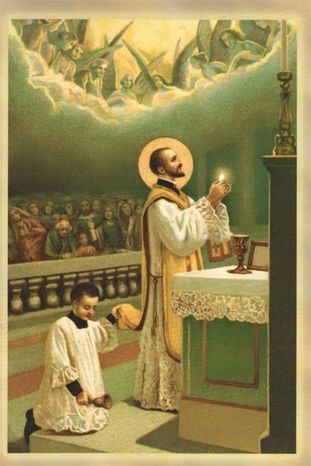 “My victim, listen again. I am the voice of truth and of life.”

“My children, My temples and My altars will be profaned; My crucifixes fouled at the feet of apostates; all My saints overthrown. My well-beloved servants, before fleeing the storm, carry Me, by grace, on your breasts! Do not leave Me to the fury of the impious.

“My children, what will be most painful, the most heartbreaking for Me, is that among My Apostle-servants, there are those who do not have the courage to keep their faith and the dignity of their character.

“You will send – no, not you – you will see them bear arms after having profaned their dignity. They will mingle with the impious; they will be the first to profane My holy temple.

“My children, My Temple will be destroyed, but It will be rebuilt.”

This week's prophecy shows us what has already happened, and it calls us to action today. We are living in these times of the overthrow of all that is holy.

People have to understand that the altars have already been profaned by changes to the Holy Mass which are hateful to God, as Christ has revealed to Marie-Julie in another prophecy.

Yes, the holy crucifix has been fouled:  think of the crooked cross carried by the anti-popes, whose design is from witchcraft!

And yes, the temples (churches) have been profaned. Consider that all sacraments have been changed in their meaning:

-Baptism is now an initiation rite to join a community of believers. Prayers of exorcism have been removed. The novus ordo has lost the sacrament which removes original sin!

-Holy Communion has been nullified on all novus ordo altars (explanation to follow).

-Holy Confirmation no longer has truly consecrated Bishops or truly ordained Priests with the lawful faculties to be able to give us this completion to our Baptism.

-Holy Matrimony, a union of two souls until death, is now easily reversed.

-Holy Absolution is now unable to be given by the new non-priests since the nullification of the sacrament of Holy Orders in October 1968!

-Extreme Unction, the blessing of the sick and the dying, is also now unable to be given by the new non-priests!

Truly, Christ’s “temples and altars [have been] profaned”!

Now let us consider, in detail, about what takes place on the novus ordo altars:

The true words of the consecration of the wine are:

Take and drink ye all of this, for this is the Chalice of My Blood, of the new and eternal Testament, the Mystery of Faith, which shall be shed for you and for many unto the remission of sins. [Source:  The Saint Andrew Daily Missal, Imprimatur 1945].

The novus ordo changed the words to:

Take and drink you all, for this is the cup of My Blood, the mystery of Faith, which will be shed for you and for all so that sins may be forgiven.

To say that all can be forgiven is a contradiction; it is a denial of the dogma of hell!

To say that all will be saved is a change in meaning.

A change in meaning makes the sacrifice on the altar now different from Christ’s Sacrifice on the Cross: think of how His suffering was due to souls rejecting His Love!

A change in meaning nullifies the novus ordo mass according to Canon Law 1367.

‘The Victim is one and the same: the same now offers through the ministry of priests, Who then offered Himself on the cross; only the manner of offering is different.’ (Cannon Law 1367)

In this way the manner of the sacrifice is changed, but the words are kept the same, and so the meaning is kept the same; it is essentially one and the same sacrifice.

Christ’s Bishops and Priests are the key. They are His Apostles.

The nullification of Holy Orders in October 1968, means that truly ordained Priests (and any resulting Bishops) are at least 75 years old today!

Among these true Priests, usually ordained as young as 24 years of age, most still alive today have, sadly, capitulated (surrendered) to the Church of Darkness.

They have gone along with the destruction.

Many of “those who do not have the courage to keep their faith and the dignity of their character” are still alive.

But to not have courage does not mean that there is no regret.

There will be elderly Priests and Bishops who regret their cowardice, their lack of action against the destruction.

These souls can be saved.

Christ ends this week’s prophecy with this key message:

“My children, My Temple will be destroyed, but It will be rebuilt.”

If you are Christ’s child, then listen carefully.

The nano-technology vaccine chip will take place first in the nursing homes. The seniors are targets. There are elderly (75+) year-old priests languishing in diocesan nursing homes.

Are you listening? It is God’s Holy Will to re-build His Church. He needs His repentant Bishops and Priests.

Sacred Hearts of Jesus and Mary, have Mercy on all us cowards! Make us all strong soldiers in Christ’s Church, so that we do God's Holy Will! Deo gratias!

LINKS:  The See of the Cross   St. Michael Prayer   Your Home Oratory