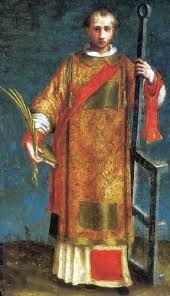 From the eyes of the soul I see immense clarity. I see a big procession come out… At the head is Our Lord, the Holy Virgin Mary, then illustrious Saints carry the palms of glory.

And it is here that I recognize Saint Laurence, martyr, with his palm, his dazzling crown, and a golden grill that he carries in his left hand…

“My children,” says Our Lord, “I send you the illustrious martyr, Saint Laurence. He is going to speak to you and encourage you.”

“The Feast of this holy martyr, [August 10],” adds the Holy Virgin Mary, “is celebrated before my glorious Assumption, but Heaven reserved a visit for his friends.”

“Brothers and sisters, I have obtained from Heaven, where I have had my throne for a long time, an abundant blessing for the parish where I am patron. I have received permission to cover the good people there with a coat of flames for the most admirable protection which has ever existed.

“But for the less good people of this parish there will not be such a privilege. Such people will find themselves without this coat and under the blow of punishments from Heaven. Numerous epidemics will fall upon this people. You, you have for your provisions the remedies indicated by the Queen of Heaven.

“The Lord will protect Brittany, but not entirely. Corners will not have this privilege.

“Do you know what will be one of the great punishments of the Breton people, of the cowardly, weak, and those ready to turn on all sides, like the wind, as long as they have life?

“One of their punishments will be the disease written in the book of God. This disease will not kill quickly: it will be of a duration which no human science will be able to battle nor to relieve. These sick, nailed to their beds – like wooden stakes in the earth – will not have any appearance of life: they will keep, in their bodies, a cold softness and they will not have any strength.

“I count,” says Saint Laurence, “some Christians who will be affected. But all have done some injustice: some will have run from their faith; others will have worked against God and His Church; others will have made fun of those whom God has sent to warn his people and to keep them safe from the unleashing [of God’s punishments].

“Brothers and sisters, do not forget this path. To put it back to you, I believe you will be happy, in a short time, under my protection.”