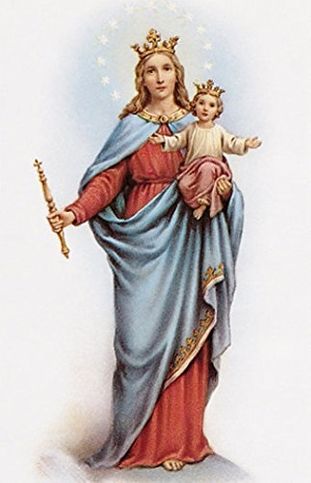 Marie-Julie sees two freedoms in the sun: the bad and the good. The good freedom is the prerogative of the small number of faithful Christians who conform their wills to that of the Lord, and who respect His rights. The bad freedom is that of a great number of people who do not hold any religious belief, and who oppose all which is good according to God.

For the moment, the Lord fortifies the good freedom of the few in number; He restrains the shameful intentions of the great number of disbelievers who look to destroy the Faith.

But there will be a battle and the good freedom will be martyred.

… The goodness of the Lord still retains the bad hearts in which only corrupt customs reign. His goodness acts on those of bad freedom, but His actions are invisible to them.

God, to this day, still moderates all of the storms made by the bad side, all of the shameful and infernal decisions. God works one last time with those in bad freedom; He works there with love, in order to leave to [the people of] the good freedom the means to regain their strength.

The bad freedom is not yet to the point of all evil that this word contains; it is not completely bad since God works there again.

But the time will come when the Divine Good, without renouncing His Power, will openly allow the bad freedom to walk across the breadth of His ideas and claims… that is to say, without measure and without limitations.

The true freedom is that of the Christians who have the Faith. This group is very small compared to the other. It is fought against and besieged by all of the menaces of the infernal bad freedom. I see the good freedom struggle against the bad freedom. In this struggle, there is a cry of joy from the bad freedom, who, from appearances, believe they will see the good freedom topple and crumble under their empire. But God, in His Goodness, works in favour of the good freedom, whose greatness of works will gloriously triumph. However, the bad live like a bloody knife that directs the infernal point of its blade towards true freedom, in its revolt against the good.

Reflection on This Prophecy:

This week’s prophecy begins with Marie-Julie looking into the small sun that shows her the future, and she sees that mankind is divided into two freedoms: the good freedom, and the bad freedom.

If we are to be on the side of the good freedom, then we must begin to live the life of “the small number of faithful Christians who conform their wills to that of the Lord, and who respect His rights.”

The people who reject God makes for a much larger group, in fact the rest of the world.

These [Godless] people “do not hold any religious belief, and oppose all which is good according to God.”

It is a fact that “the great number of disbelievers… look to destroy the Faith.”

But we are divinely protected, since “God, to this day, still moderates all of the storms made by the bad side, all of the shameful and infernal decisions.”

He does so “in order to leave to [the people of] the good freedom the means to regain their strength.”

The key here is the phrase “regain their strength”.

We have lost everything but our Faith.

This is how devastating the Eclipse of the Papacy and the Church have been!

Ours is the “true freedom” because we have the Faith.

However, we are a very small group, and we are “fought against and besieged by all of the menaces of the infernal bad freedom.”

They diabolically desire to see us “topple and crumble under their empire.”

We have to pray our daily Rosaries, all 15 decades, in order to do the necessary battle and overcome all evil attacks upon ourselves.

And we need to wear divine protections: the Brown Scapular, the scapular of Benediction and Protection, the Saint Anthony Brief, the scapular of Saint Michael, the Crucifix, holy medals, etc.

Our enemies, even within our own families, “live like a bloody knife that directs the infernal point of its blade towards true freedom.”

We are battling for our eternal souls, for the freedom and exultation of Holy Mother Church and the removal of the church of darkness from Rome.

We need the true Holy Father to take the Chair of Saint Peter once again.

And the Holy Father is alive and praying for this victory, and for all of us!

This time of battle is our time!

At the beginning of this prophecy Marie-Julie looks at “the golden rock” (the eternal, perpetual Papacy) and “the sun of God” (the Church).

Our Lady, when appearing in La Salette, France, spoke of the Church being in eclipse.

This means that the Church exists, that the Papacy exists, but that they cannot be seen.

What is blocking “the golden rock” and “the sun of God” from being seen?

Well, an eclipse is a darkness that blocks out the light from the sun.

What is this darkness?

It is the darkness of the evil of our times: lies, deceiving appearances, the outlawing of God from among our societies of people, and the fear of anarchy and oppression.

But pray, pray, and pray your 15-decade Holy Rosary!

God is on our side!

The fight will be a real war, “[b]ut God, in His Goodness, works in favour of the good freedom, whose greatness of works will gloriously triumph."

Remember, we have the Virgin Mother of God as our General in this fierce battle:

“Who is she that cometh forth as the morning rising, fair as the moon, bright as the sun, terrible as an army dressed in array?” (Canticles 6).

She is the destroyer of all heresies, of all lies, and her weapon is the Holy Rosary.

Vouchsafe that I may praise thee, O holy Virgin.

Grant me strength against thine enemies.