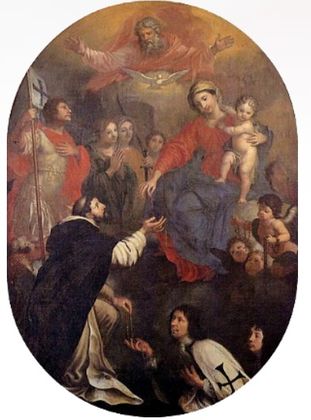 “True freedom is that of the Christians who have the Faith. It is very small in comparison to others. It is fought against and harassed by all the threats of the infernal bad freedom. I see Her struggle in front of the bad freedom. In this struggle, by appearances, there is a cry of joy in the bad who believe they are seeing the other side fall and crumble under their empire. But God, in His Goodness, acts in favour of the good freedom, whose greatness of works will triumph gloriously. However, the bad remain like a bloody knife which, in its revolt against the good, points this same point of its blade at the good.

“The bad freedom is positioned over the holes [traps] of Hell; the good stands over the powerful works of God. Despite the littleness of strength of the good freedom, God does not deny it energy and courage in combat; and even in this combat, the oil of the Divine Word will help in the struggle against the larger bad freedom.

“The sun makes me see that it is almost impossible to make sound at depth the wickedness of the bad freedom and the bad faith of he who reigns supreme, and what he intends to invent against what helps us to serve God and to defend Him.

“In the sun, I see the worsening of the meaning of this word: bad freedom. This is being prepared in all these attacks which are currently being put into circulation against all things. Absolutely nothing escapes this word.

“But I also see that God, by a secret of His Goodness, gives to all in the good freedom the time to get stronger, during this present time. The bad freedom will be affected, in return, by the Heart of Peace. A difficult time will come, a moment of struggles on all sides and even within ourselves. Satan is relentless to awaken this word ‘freedom’… He will raise up a struggle against the True Faith and against generous Christians. There will be a general struggle and outpouring of all that is evil.”

Reflections on This Prophecy:

“True freedom is that of the Christians who have the Faith.” The Roman Catholic faith is unique to all the world, because it alone follows the teachings of God the Son, Jesus Christ, when He walked upon this earth.

Last Sunday, we read from the gospel of Saint Luke, chapter 5, verses 1-11, where Christ teaches a crowd of people standing at a shoreline, from Saint Peter’s boat that is anchored offshore.

In Fr. Leonard Goffine’s analysis of this gospel he provides the following lesson:

Why does Christ teach from Peter’s ship?

By this He showed that the true doctrine is preached only from the Church, of which Peter is the head (John xxi. 15) which is here represented by his ship. Amid storms of persecution Jesus has preserved and will preserve this ship, His Church, until the end of time. (Matt. xvi. 18). Peter still guides the bark in the unbroken line of his successors, and Jesus still teaches from this ship the same doctrine through the bishops and priests, as His cooperators, with whom He has promised to remain until the end of the world. (Matt. xxviii. 20.)

[Source: pp. 449-450, explanation of Gospel of 4th Sunday after Pentecost, taken from the book: Explanation of the Epistles and Gospels, Part I, by Fr. Leonard Goffine; imprimatur 1918, Refuge of Sinners Press].

The Holy Roman Catholic Church, and Her Head, the Pope, are in eclipse – not seen. Likewise, we Faithful are also in eclipse, because we have no church buildings to go to for the Holy Sacraments.

Our chapels, our altars and oratories are in our homes, hidden, because we have been pushed out of our church buildings.

Our priests, if we have the grace to have them, have also been pushed out of their dioceses decades ago.

We are the exiled. We wait on God because we love Him. And God, in His Love for us, has given us this most precious gift of the holy Roman Catholic Faith.

Marie-Julie sees Holy Mother Church “struggle in front of the bad freedom.” This is the satanic battling to take over the visible Papacy, which is finally successful in the Conclave of October 1958, after the death of Pope Pius XII.

By the supernatural grace of the Holy Ghost, Pope Gregory XVII is elected, but  the evil freedom succeeds in pushing aside the Holy Father and controlling Him and all baptized Roman Catholics around the world.

Vatican 2 presents Roman Catholics with denials of our Holy Faith under the guise of a chance to convert Protestants. However, some Roman Catholics are given the grace to know and love their Catechism, dogmas, and canon laws. These Roman Catholics become the fighters of the good freedom:

“The bad freedom is positioned over the holes [traps] of Hell; the good stands over the powerful works of God.”

For our opponents, theirs is not a position of being on the side of truth, but rather their aim is to be on the winning side:

“In this struggle, by appearances, there is a cry of joy in the bad who believe they are seeing the other side fall and crumble under their empire.”

They are damned because they do not follow the Truth, they just want to be on the side that will dominate.

And they fight with lies, so they know they deny the Truth. They know they are rebels against God their Creator. They hate God.

But we love God. We love His Word. We love Truth. And so, we are strengthened for this battle and our struggles, since “the oil of the Divine Word will help in the struggle against the larger bad freedom.”

But we must prepare, for the evil side is busy arranging “attacks which are currently being put into circulation against all things. Absolutely nothing escapes...”

In fact, we are now in the time of preparation, because we can see the evil side preparing for their final attacks upon us, the mark of the beast.

Marie-Julie is made aware of this pause and she refers to this short time given to us:

“But I also see that God, by a secret of His Goodness, gives to all in the good freedom the time to get stronger, during this present time.”

Dear readers, I can assure you from my personal experiences that the daily 15-decade Holy Rosary is our only weapon to help us to work effectively at our preparations against what is coming:

“A difficult time will come, a moment of struggles on all sides and even within ourselves. Satan is relentless…. There will be a general struggle and outpouring of all that is evil.”

So battle on, Rosary in hand!

Our Lady of the Holy Rosary, our Lady of Victory, pray for us!