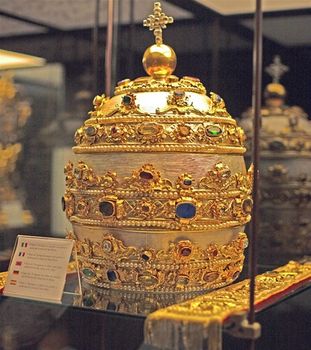 God works in the labours of the good freedom; in the soul in which are His Works, in the heart which is also His Work. He works in an admirable manner, when his labours flow into souls, through His Divine and Eternal Word, drops of hope and of power. His Word is a Divine Gift for times present and future. God always makes flow, in those who are His, a superhuman power.

Today, the Faith lives again in the radiance of His Kindness. The reign of the impious will be so powerful and so formidable, by the rigour of the punishments it promises, that God, in His Goodness, presently works, with force, to maintain the lamp of our hearts with holy oil, because this lamp of Faith and of courage will be very necessary.

How many times will those who rule in the bad freedom impose the denial of the Lord, of His existence, of the Faith, of His Church? The good freedom will be led to martyrdom by those of the bad freedom. But, I see in the sun, that the Goodness of God works invincibly [triumphantly] in favour of His Church, of His Apostles, and of His faithful defenders for which the law is a heavy, vain attempt to make hearts and faith groan.

God works in the midst of the persecution of the Church and of the Faith; He works in the labours which have become the way by which it rains His Divine Word. His Word lifts those things to the end degree, and to the beginning of a new degree, when all the works of God will have their stamp (seal) of black (satanic) persecutions. The works of God are immense: we can count them in the sun, but not outside of it.

I see that many of these works will be destroyed, but not up to the last root. This (the last root) will remain in the heart where the work will be accomplished… Labour in the works of God, labour which I would call human, although Divine, since God is present there and works there, this human labour will receive, in these obscure [dark] times, a stop according to the views of humanity. But God, He, will never stop, even if there seems to be a suspension, according to humans, in this Work. According to God, it will not be suspended.

All of the labours of God will bear flowers again after the deluge [flood]. This deluge, which I see presently, will not be the last: there remains another, that which will begin to end everything on earth, to end the world (1).

Footnote (1):  This last phrase seems important. The next deluge will be a foretaste of events at the end of the world, but a portion of humanity will escape by an era of great spiritual fruitfulness. After a new perversion [of the Truth] this will be the end of humanity on the Earth.

This last part to this longer prophecy focuses on the seeming cessation (stoppage) of the Holy Sacrifice of the Mass.

It seems that Priests are no longer climbing the three steps of the sanctuary to approach the altar of sacrifice, the way that Christ climbed Mount Calvary to be crucified on the Cross.

The crucial question is: Do we, with the Papacy in Eclipse, have true Priests who continue to offer up the Holy Sacrifice of the Mass on Roman Catholic altars, or do we not?

Certainly, this prophecy points to a deluge of iniquity:

The priesthood seems to be dirtied by sacrilege, by unworthiness.

This points to the change in the Sacrament of Holy Orders in October 1968.

In the true sacrament, the bishop gives explicit instruction to the ordinands (those about to be ordained into the Priesthood) to forgive sins, to confect Christ’s Holy Sacrifice, to heal the sick, etc. based on the instructions Christ Himself gave to His Apostles, as recorded by the Evangelists.

The diabolical change became “to serve God’s people,” a vague notion, which has been in place since October 1968.

So no, there is only a bastardized (illicit = illegal), false priesthood here.

The true Priesthood remains today with those who were ordained prior to October 1968 --- they are 76 years of age and older!

But of them how many have the true Roman Catholic Faith, as taught in our Catechisms prior to the diabolical vatican 2 council of destruction?

[And it was a diabolical council, upholding all of the bastardizing (illegal) changes to the Holy Sacraments, and bringing in further changes to further deepen the spiritual murders, such as the changes to religious habits and to the holy Rules of the different congregations (Dominicans, Franciscans, Redemptorists, Salesians, Society of Jesus, etc.).

Carmelites today will tell you that their Rule was last on the list and did not have time to get changed before the end of vatican 2, but if you look at their conventual / spiritual life today, it is in the same spiritually dead style of every other congregation].

We have one other legal (licit) way to find True and Faithful Priests though!

“I see that many of these works will be destroyed, but not up to the last root.”

You see, the Papacy and Church are in Eclipse (words of Our Lady of La Salette). This is where our True and Faith-filled Priests are, with the Exiled Holy Father, the Successor of Pope Gregory XVII.

The Holy Father is “the last root”. He is that Bishop of Rome who can legally make Priests.

Are these Priests in place throughout the world?

The good freedom is on God’s side, and receives His Power to triumph over the bad freedom:

“God always makes flow, in those who are His, a superhuman power.”

“… I see in the sun, that the Goodness of God works invincibly [triumphantly] in favour of His Church, of His Apostles, and of His faithful defenders …”

But we faithful lay people have a duty also!

Ultimately, we have to have the strength of our Faith so as to avoid the sacrilegious, illicit (false) priests, and their sacrilegious “sacraments”.

We have to cling to Holy Hope, to the Truth that “God works in the midst of the persecution of the Church and of the Faith.”

We have to understand that there is a false church, calling itself Catholic, but not Roman Catholic, because it does not align itself with the Papacy in Eclipse:

"The works of God are immense: we can count them in the sun, but not outside of it."

Persist in that one hour of spiritual battle, pray your 15-decade Holy Rosary!

Say an Act of Contrition often, trusting in God’s Justice. He knows you would go to Confession to a True Priest if you could --- Be at Peace!

And wear your Brown Scapular always, even in the bath or shower!

Do not give the demons even the smallest opportunity for doubt! Follow the precepts of the Holy Roman Catholic Faith.

This prophecy gives us a huge gift:

“But God, He, will never stop, even if there seems to be a suspension, according to humans, in this Work. According to God, it will not be suspended.”

What is being spoken of? The Exiled Papacy, which brings us the True Priesthood and the Holy Sacrifice of the Mass!

“All of the labours of God will bear flowers again after the deluge [flood].”

There will be a return of True Priests, of true religious congregations following their true Rules. This deluge, this takeover from the top (the pushing aside of the Papacy), will be ended by the French Monarch and the men who fight with him.

All of this has been prophesied.

Already in her time, 1850-1943, Marie-Julie saw the masonic, traitorous “priests” and “bishops” put into place.

What the Eclipsed Holy Father, and we faithful Roman Catholics, are yet to face is the domination of the man of sin, the Antichrist:

“… there remains another, that which will begin to end everything on earth, to end the world.”

So breathe deeply, pray deeply, love everyone deeply with the Love of God, of the Crucified Christ our Lord.

We are almost there!

Look, Christ is about to come to reward us!

Holy Mother of God, and our Mother, help us to live holy lives and to die holy deaths. We ask this through the Precious Blood and the Holy Face of Jesus!