COMETS IN THE SKY 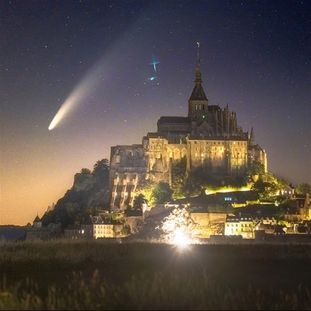 This week, due to it being the last few days of seeing this comet Neowise in the northern hemisphere skies, and the spotting of another fast comet, Atlas, in March, we will consider a light in the sky, a “torch”, thus possibly a comet, appearing as a sign predicting violence in the Church by “barbarian men” and the return of the French Monarch from exile in a foreign land (this week's prophecy given to Marie-Julie Jahenny).

We will also look into the research of Yves Dupont on what comets do to our seasonal climates on earth. The photo is of Comet Neowise flying over Mont St. Michel, France, in mid-July 2020. We thank our brother-in-Christ, Hans, for this photo and alert.

Marie-Julie’s prophecy speaks of a sign in the sky, a torch, which signals the takeover in Rome. What we have to ask is, did this happen with the Conclave of October 1958?

Here is this week's prophecy:

“When I will have sheltered against danger My servants and the blessed families, as long as the torch will not have shown up, until that precise time, My present people, you shall not move from the resting place where I will have placed you.

“But, when I will have lifted the veil up, when, under the sky will appear the calling directed to the friends and the brethren of the Saviour, My victims and servants will arise in their turn… The book, containing for My friends their sending off, will open up within a short time. It will hold things so great as for not a single soul to be able to suspect about it or figure it out.

“As for you [Marie-Julie], for several months already, you will have been sitting on a throne amidst the delights of eternal happiness; but I will split the sky open to let you gaze upon that scenery of triumph and glory.

“A cloud will arise and go, overleaping through space, until upon the land of another kingdom. The King’s servants --- servants of your King --- will receive an invitation, through these pages of My divine writing, to follow after this prodigious cloud which will make my people astounded, still standing amidst the tears and tremblings of the horrible persecution.

“The King will have well deserved, that I perform, for the sake of his honour, marvelous manifestations which will burn his opponent’s tongues and draw vengeance upon foreheads ruined with bruises and dust. I will call down blindness upon the place where they will be awaiting the coming of another saviour, longed after as the messiah, by the friends true and faithful to that party.

“With the eyes of your soul, you [Marie-Julie] shall see the promised cloud arising. It will move in direction of a foreign land where is to be found, in captivity and exile, the one whose destiny is preserved to cause the Lord’s temples to blossom over again, to arise from mud the forehead of this one who promised so many times to remain faithful. She [the Church] is going to be delivered to the hands of barbarian men who will seemingly reign like other emperors… Their ruling will be short lasting.

“At present, the lord removes veils and allows your eyes to run over the designs He had kept hidden until now, to spare His people sorrow, and, most of all, not to frighten anybody. It is truly His love which is in a position to speak out that way.”

And now, let us consider the effect of comets upon our seasonal climates on Earth:

"Will the comet to come be the same as that of Exodus? It is not impossible, when we consider the description of the plagues as given in Exodus and those described in our Christian prophecies. When the tail of the Exodus comet crossed the path of the earth, a red dust, impalpable, like fine flour, began to fall. It was too fine to be seen, which is why it is not named in Exodus (7:21), but it colored everything red, and the water of the Egyptians was changed into "blood". The fish died and the water was poisoned by the decomposition of their flesh. It is for this reason that the Egyptians had to "scratch the earth", that is to say, to open new wells. A similar occurrence was recorded in various parts of the world. After tje fine rusty pigment fell over Egypt, there followed a coarser dust -- "like ash," this is recorded in Exodus, for then it was visible. This ash irritated the skin and eyes of both men and animals. They scratched themselves and sores formed; boils appeared and changed into postules for want of being treated. Soon, the infection spread to the whole body and death followed. After that ash-like substance became a shower of fine sand, and then coarse sand, grit, gravel, small stones, large stones, and finally, boulders. The narrative of the Book of Exodus confirms this and is in turn corroborated by various documents found in Mexico, Finland, Siberia, Egypt, and India. It is therefore certain that a comet crossed the path of the earth more than 3,000 years ago, causing a widespread destruction. This is the kind of phenomenon (if the prophecies are accurate) which is soon to strike the earth again. And now, as it was then, this exceptional occurrence will be permitted by God as a punishment for the sins of men.

"Mountains will literally split open; the sea will overrun whole provinces and possibly even small nations such as Holland; some coastal plains will just collapse into the sea; the sky will be on fire in many places when the oxygen of the earth's atmosphere will ignite the hydrogen of the comet's tail. As a result, tremendous hurricanes will be induced, adding to the devastation. The oxygen supply being used up in those regions where the sky fire will rage, people who leave their homes will die from asphyxiation which is probably why so many prophecies say: "Stay indoors; keep your windows shut." But the hurricane will promptly bring back fresh supplies of oxygen with the effect that this ordeal will be of very short duration. Then, torrential rain will fall, quenching the many fires on earth, but, at the same time, causing widespread flooding. After all these disasters, food will be so scarce that a general famine will follow. Millions of people will starve to death; their unburied bodies will cause pestilence and epidemics all over the land. . . .  [Source: pp. 84-85, The Coming Chastisement by Yves Dupont]."

From his bullet points on page 86:

Reflection on the Yves Dupont information and Marie-Julie Jahenny’s prophecy:

The information that Mr. Dupont is missing is supplied by the prophecies given to Marie-Julie Jahenny: During the 3 Days of Darkness, only blessed candles, made of 100% beeswax, will give light. No other light sources will work. This is how people will recognize that it is a Divine punishment.

Irregular seasons means that we can expect our food prices to go higher as the harvest of crops is affected. So it is time to prepare now: can, freeze, dehydrate, etc.

For we who understand about the Eclipse of the Roman Catholic Church by “barbarian men”, Marie-Julie’s prophecy is a confirmation of “the horrible persecution” that happened at the Conclave of 1958, immediately after the election of Pope Gregory XVII.

Many people do not know that the mason Angelo Roncalli who was the first anti-pope of this time -- he called himself after an earlier anti-pope, John xxiii, held another Conclave, which was one day in duration, immediately after the election of Pope Gregory XVII. (See Il Pappa non Eletto by Benny Lai).

It is most certain that the effect was to take immediate and strong control over the voting cardinals.

But the Holy Ghost promises us: “Their ruling will be short lasting.”

We look now to the King, the French Monarch, who has been living in “a foreign land . . .  in captivity and exile, the one whose destiny is preserved to cause the Lord’s temples to blossom over again, . . .”

What do we have to fear? Nothing!

We have only to pray for the French Monarch and the men fighting with him! We have to help this promised Monarch, God’s appointed king, of the lineage of the martyred King Louis XVI, to be known and desired as the rightful king!

It will be a short time now, we are almost at the triumph!

The Papacy shall have the Chair of Saint Peter once again! The Holy Father shall be a light once again to the nations!

This will be the Triumph of the Immaculate Heart of Mary and the Sacred Heart of Jesus.