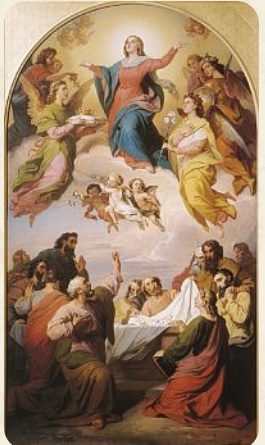 Important note from the editor:

This Monday, August 17, 2020 is the day to take your Hawthorn leaves and offer them to the Blessed Virgin Mary, asking her to bless them. There is no prescribed prayer, so say prayers that will give honour to the Virgin Mother of God.

And now for Fr. Roberdel's short preface to this week's prophecy:

Marie-Julie sees that, in a time to come, works destined to glorify God will be as if suspended, especially in the cities. Apparition sites will become places of scandal by the assembled who stand there. Faith will weaken, devotion to the Sacred Heart will be repressed. Christians will maintain profanations in a low voice…

Is it still a simple vision of the future? Previously…

When I come upon the golden rock, at the foot of the sun, I see five rays perfectly which seem like a very large alliance.

In this light, I see the war against the works of God, particularly at the heart of the large world, there where the men are in greater number than in the country (in the cities). There, the works of God – there are not many anymore but there are some which still continue – there, the works will not be delayed to undergo demolition on the points destined to glorify God.

I see that these works will be suspended. I see that places, visited by the Divine Presence, will become places of scandals by the decision of terrible things with regard to all.

During the timespan of six to eleven months, we will not speak anymore of these works. There will not be any respect for the places which Our Lord has visited. Christians will maintain, in a low voice, their indignation before the profanations and the assemblies which will turn these places into places of horror.

I see that at the moment of the suspension of the works of God, there will be a fierceness from Hell, especially against devotion to the Sacred Heart of Jesus. Already we do not want to recognize this devotion; we do not want to admit that, by this devotion, God is able to give us the deepest peace. This devotion, in the centre of the place where it exists (?) will be pursued with terror and fury, even up to the point of acknowledging, if we can, that there is nothing more than men to save the world from danger.

Those who persevere with the Faith will have much to suffer. The reign of the works of God, however, will not be entirely destroyed, but these works will not return in glory, especially at the centre of this country which is also ours (France), until after peace is announced there.  There will also be a wrenching against the Cross, above all in these same countries.

I see that God particularly hastens these works, especially there where they reign, but where peace is not guaranteed, because calm is not perfect there.

All of a sudden, like whirlwinds, the ways will open themselves and everything will enter into a profound upheaval. While the whirlwind will make fire and joy, it will be led promptly by the order of God. It will be of a ferocity so terrible that fear will extend everywhere.

After this storm, once the whirlwind has passed (our house), discord will throw its dust and its fire beyond the limits of the lands of our country. When peace will be with us, trouble will be elsewhere, even in the most peaceful and most respectfully governed places.

The light is active in the sun, when these things will happen to us, but the invisible love of our Lord never stops being present at our sides during these furious storms, and, from time to time, He gives us calmness, as a rest, but this is enough for evil to continue its war.

By the Will of God, holy lights strongly preach confidence and peaceful hope to us. These lights who speak have not yet reached their full development on all that must be done… They present us the Cross of the Saviour as a shelter; our confidence on the power of the Cross promises us an asylum of protection.

“Enough, My children,” says our Lord. “Rest yourselves in the meditation of My Divine Wishes.”

We are arrived at that « time to come, [when] works destined to glorify God will be as if suspended”.

What has been suspended, in fact, outlawed? The true and holy Sacraments!

At the beginning of this prophecy, Marie-Julie sees not just any golden rock, but “the golden rock”.

This rock, being the rock seems to represent the Papacy.

As the Papacy is only lower than Christ Himself, then this sun would seem to be Christ our Lord, He who gives the Papacy His Power over His Church, and therefore this rock sits “at the foot of the sun”.

The Papacy is “at the foot of the sun”, which seems a very beautiful image, as the light from this sun makes it appear “golden”.

But there is an important distinction to be noted: the rock is not made of gold; it only appears golden, like fool’s gold.

Next, Marie-Julie says: “I see five rays perfectly which seem like a very large alliance.”

These five rays of light are so similar in their strength, that Marie-Julie thinks they are part of an alliance.

This word “alliance” is a word from politics, and seems shockingly out of place in this natural landscape.

The number five (of the five rays) may point to five who seem to be Popes, and whose false papacy (golden, not gold), seems identical in all aspects (each are anti-priests who teach masonic thinking and communist politics).

Since the pushing aside of the true Papacy after the election of Pope Gregory XVII on October 26, 1958, anti-pope Borgoglio is the sixth anti-pope.

But Borgoglio is very different from his five false predecessors in one important aspect: he was never truly ordained!

Borgoglio received the false non-ordination in 1969. (Recall that the nullifying changes to the Sacrament of Holy Orders takes place in October 1968).

This week’s prophecy would seem be focusing on the first five anti-popes, on the destructions of those 55 years, 1958 to 2013 (the latter year being when anti-pope Ratzinger steps aside).

Therefore, Borgoglio rightly belongs to a new era which prepares the way for an almost absolute satanic rule: the era of non-priests who have no divine power whatsoever against the forces of evil.

Today we clearly see that the five rays of light of the five anti-popes have been the preparation of a false church of false understanding and false teachings – a demonic worship which is still growing, still infecting minds and keeping people focused on material cares rather than their true spiritual needs:

Marie-Julie says, “In this light, I see the war against the works of God”. True. The holy Sacraments, the awe-inspiring rubrics at the altar, the holy Catechism, the holy Rosary, the Canon Laws, the removal of the altars and tabernacles from their central place of honour; indeed, all aspects of the Holy Roman Catholic way of praying (and way of thinking) have been attacked and removed.

This has truly been the greatest war against Holy Mother Church: “the war against the works of God”.

Today, we can see that when Marie-Julie says “In this light, I see the war against the works of God”, she means an anti-light; she means a diabolical, masonic light which defies Christ, which wars against all that is holy in order to steal souls from God.

The Holy Roman Catholic Church, the Church of Jesus Christ Himself, has been made to “undergo demolition on the points destined to glorify God”; that is, destined to raise a man’s mind to God and to the question of his eternal soul.

The devil has been working hard to remove all memories of God. In our present time, it is through the burning of churches.

Specifically, Marie-Julie is told of these diabolical changes:

May we also, on this great Feast Day of the Blessed Virgin Mother, her Holy Assumption into Heaven, body and soul, find some time to meditate on these revelations about this war that we are still battling.

Holy Mother, ask Our Lord Jesus Christ to grant the French Monarch and the true Holy Father easy victories over the forces of the Anti-Christ, who is the anti-light.

May the true Papacy occupy the Chair of Saint Peter once again, to be a Godly light to the world, so that souls may be converted and saved from Hell!

We ask this in the Holy Name of Jesus Christ, our Lord.