CUTTING OFF THE POPE 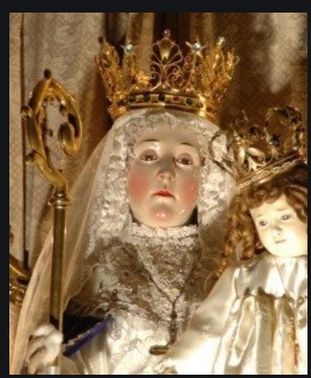 I see again in my sun:

Outside of our France, the Church is consoled by the numerous abjurations of those who return to the Catholic Faith. In France, this will be the opposite (1): the denial of the Faith is widespread there and painful to the Sacred Heart of Jesus. The designs of Heaven are not in agreement with those of men who now govern.

Footnote (1): While elsewhere, especially in the English-speaking countries, around 1880, there are many returns to the Catholic Faith, France undertakes the road of apostasy.

A surprising death comes to punish, in an amazing manner, the descendant of he who has betrayed the august Pontiff. (The Imperial Prince, son of Napoleon III, who has abandoned Pius IX). This death, in the eyes of God, who is Just, has been nothing less than a punishment to avenge the perfidious attacks of he who, on the outside, seems fully disposed to help the Church and who, interiorly, carries a pit of black sentiments against this same Church and against its Chief. This race will not flourish on the throne.

I again read in the sun that I love and before which I sit:

The governments prepare, with an appalling rage, the ruin and the degradation of the Church. It seems to lift itself, from us to foreign lands, and from foreign lands to us, a whole private news story.

For us, it is France, but it is not really us, since we involuntarily depend on this kingdom which enacts horror, as much as it is profoundly engaged in a perishable end where we are not able to have hope. (2)

Footnote (2): All nations with a collectivist government are intimately united to the U.S.S.R. She is believed to be free, but she really is not.

I search for hope in the sun, but I am not able to find the light which brings it.

The news story will begin from here, from France, to spread to foreign countries. I see there, in the sun, the hidden summary; but it will be open to all the winds and carried to all coasts.

To arrive more quickly to the end of the Catholic Church, it is necessary to begin by cutting off the authority which governs Her. This root, is the Pope. In the face of this demand, there is reflection on the part of he who, perhaps, is hardly ever on the side of Faith. In order to destroy the root of the Church [the Pope], it is necessary that, from here, we give a strong hand [control events]; then by the same strong hand from foreign countries, we will become the same, here in our France.

This time, without the promised miracle, it is impossible for the Church to escape. There are hundreds of armed Reds [communists] who will walk over Her, but with more fury than during the Great Revolution. Without the miracle of Heaven, it is impossible that the Church triumph from this perfidy and these sacrilegious attacks which are prepared for Her with so much cruelty.

What a painful prophecy this is to read! And yet, it is so true… all of it.

Napoleon was never good for the Church or for the French people.

Did you know? His symbol is the bumble bee.

It is everywhere, you know? On plates, mugs, etc. Look among your things and you may find it… time to do some tossing out of the anti-Catholic rubbish!

Napoleon’s reign symbolizes tyranny against God and His Church. This is why the bumble bee continues to be put on nearly everything.

But there is a consolation for the Church: “the numerous abjurations of those who return to the Catholic Faith.”

If you recall, an abjuration is a verbal and public declaration of admittance of sins against the Truths of Holy Mother Church and God; it is a declaration of repentance. [See REPENTANCE. You can make this abjurationa and Procalamation of Faith aloud in front of family, Roman Catholic friends, or if you are alone, in front of a Crucifix or at your home altar.]

There is one interesting word to note about the reign of Napoleon. Notice the prophecy: “This race will not flourish on the throne.”

Was Napoleon not French? He appears Caucasian, but if he was not then of what race was he? Jewish?

This would explain why his reign attacks the Holy Roman Catholic Church, and it also explains the continued proliferation of the bumble bee everywhere, by that race which continues its perfidy.

The word perfidy appears in this prophecy to describe the attacks on Holy Mother Church.

Perfidy means a breaking away of faith and of trust. Perfidious acts are treacherous, meaning deceptive and dangerous:

“… the perfidious attacks of he who, on the outside, seems fully disposed to help the Church and who, interiorly, carries a pit of black sentiments against this same Church and against its Chief.”

These attacks become global in scale:

“The governments prepare, with an appalling rage, the ruin and the degradation of the Church.”

But these attacks have their origin in France, although this remains carefully hidden:

“It seems to lift itself, from us to foreign lands, and from foreign lands to us, a whole private news story.”

The French people are innocent, as Marie-Julie Points out, as they “involuntarily depend on this kingdom which enacts horror.”

The horror is the cutting off of the Pope from the Roman Catholic faithful worldwide.

This cutting off leaves the Body of the Church without Its Head.

It is a monstrosity! And it has already happened!

The Conclave of 1958 was the stage for the pushing aside of Pope Gregory XVII, thereafter known to the world as Cardinal Archbishop Giuseppe Siri of Genoa.

The Roman Catholic Church has been made to disappear from sight! Its Truth is no longer being proclaimed from the Chair of Saint Peter, which is to be a light to the world, a beacon of Truth to fight error!

This prophecy lets us see that the aim of the devil, God’s and our true enemy, has been precise:

“To arrive more quickly to the end of the Catholic Church, it is necessary to begin by cutting off the authority which governs Her.”

Today, we see communist violence in the streets of our cities worldwide, with the ANTIFA movement.

This also has been another planned attack against Holy Mother Church, as Her buildings and the statues of Her Saints are being destroyed.

We are continuing to experience the violent physical and psychological attacks begun against Holy Mother Church so long ago:

“There are hundreds of armed Reds [communists] who will walk over Her, but with more fury than during the Great Revolution.”

Our Lady of Fatima warned us that the errors of Communism would spread throughout the world. It is happening still!

When will these attacks stop?

We must await the miracle from Heaven:

“Without the miracle of Heaven, it is impossible that the Church triumph from this perfidy and these sacrilegious attacks which are prepared for Her with so much cruelty.”

May we soon see the days of the promised Triumph of the Immaculate Heart of Mary!

Tomorrow is the Feast of the Immaculate Heart of Mary (August 22).

Let us each honour the Blessed Virgin Mother of God, the Mediatrix of all Graces.

Let us make Saturday hers, as a way to thank our Blessed Mother for her Divine love for us.

LINKS: REPENTANCE  St. Michael Prayer   The See of the Cross   The Few Faithful   3 Days of Darkness   The Warnings   The Sun  After the 3 Days   Marie-Julie Prayers   Lethal Plague