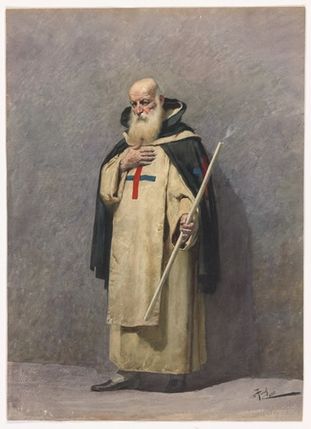 The demon will come back many times. In 1878, Adolphe Charbonnier wrote to his brother Auguste:

“In Thursday’s ecstasy there was a scene that I really regret you did not see. It was a long dispute between Marie-Julie and the Demon. It was a giggle. I am far from writing down all the responses. She talked like a mill and you will see the pretty words that they exchanged. I have not invented a single one.

“Marie-Julie was animated greatly and all this was said in its jargon which you know, and in a cheeky tone! We held on to our sides. After the ecstasy, Marie-Julie confessed that there was a moment when Quequet was so impatient that she had been on the point of answering Cambronne’s word, but she did not dare.”

Saint Thomas introduces the scene, announcing the arrival of the Demon.

--Ah, Saint Thomas, I beg you, take me away from here. [This is MJJ speaking].

“Stay. Do what is to the glory of God.” [says Saint Thomas].

--I stay because it is for the glory of the good God.

This villainous monster, this Quequet, has seven heads. He has some down to his feet, behind which there are long “pricks” like claws. [Footnote: pricks, points, and on this occasion, spurs]. He is very small, but of an enormous thickness and of a frightening ugliness. He says to Saint Thomas:

“Now leave me to speak with the one you bring me.”

--I hate you, infernal monster;I love Jesus, the Holy Virgin, the Cross.

“Why do you love Christ so much?” Quequet demands. [MJJ has given the devil this nickname of “Quequet”, which is used for pigs when they are born runts].

“I hate you so much that if I could take a handful to your head, I would hurl you on my victim. [Footnote: Father David, the first victim].

--Ah! You speak again of this name. You should blush.

“I also hate him who must…”

--Saint Thomas, take me then.

“I hate him who Christ chose to raise His Cross. I detest that Perrot.”

This refers to the name of Father David who was called Pitre or Peter… from where, with disdain, Perrot.

--Ah! Go! replies the ecstatic. He does not love you either, villainous beast! He spits in your face. Long live my Father of the Cross!

The monster grinds his teeth.

--Ah! but you are stupid, replies Marie-Julie, infernal monster! It is you who is a “perrot”… Go away. Leave me.

“Oh! replies Quequet, if I could, I would grab his paw with my nets, and I would take him … I would crush his heart!

--His heart does not belong to anyone but Christ, only Christ.

“Then you do not want any pleasure on earth?”

--I only love privations and I welcome them.

“If you would, before something does not happen and that I do not want to tell you, if you would sign me a little thing. [Footnote: No doubt it is about signing to confirm the false scandal which the Demon made run through Blain and Nantes, concerning relations between the stigmatized one [Marie-Julie] and Father David].

--Ah! Cursed beast, you can keep your secrets.I do not have any need for your counsels, cursed Quequet!

“I have a secret of something that is being prepared but I do not want to tell you. If you want to say really abominable things about Perrot, you will be quickly freed.”

--I curse you, Quequet. I do not care about you.

“If you want to tell all of your guests to go away, to run away from here, well good! I will transform your house into a beautiful palace.

--Ah! You make me laugh! Do you have the power? Go ahead then! You cannot do anything.

Then, with an air of mockery, Quequet continues:

“Ah, on my faith, Christ nicely knew how to germinate and make blossom in His friends that which is not agreeable to anybody.”

--Perhaps that is agreeable to the good God! What does that do to you, stupid villain?

“I know many secrets…”

“Well! You will tell them to one of your friends, the one who is the friend of the large Perrot.”

--But, shut up then ! You are nothing more than a ragman, starving villain, scoundrel!

“In my seven heads there are seven heavens…”

--Yes, these are your henchmen who are inside! Go, then, to eat the carrion: again, it is very good for you. Go away! But then, Saint Thomas, close the mouth of this monster there!

“Here are my three secrets for three camels.

--Camels ! To whom are you speaking, dirty Quequet? You are the one who is a camel. You carry all the bags of impiety, with their malice. You annoy me.

“If I could make all of the misfortunes happen to him! If I could take him by surprise and make him become bad, this wine drinker…”

--What are you trying to say? Speak clearly then, make yourself understood, if you dare… Get out of here, dirty Quequet!

Addressing himself to his henchmen, the Demon says:

--Oh, poor fool, Quequet! You are all the same too stupid! You are not able to do anything! Go look for his head, see if he will give it to you. But no, you are too cowardly, bankrupt vermin! Leave me in peace!

At these words, Quequet begins to run all over the field, frothing in rage, and “crushing” me with nonsense. He gallops, shouting to his friends: “There is nothing to be done!”

They all begin to run together, devastating, destroying all that is growing in the field. They “blow their noses”1like animals. [Footnote 1: This is said of animals which, in the summer, run in a disordered fashion, and are not able to be calmed. This crazy race is attributed to the bite of a certain fly]. They grind their teeth and froth from rage.

Reflection on this Ecstasy :

You will notice that this week’s ecstasy is prefixed by a note from one of Marie-Julie’s faithful secretaries, Adolphe Charbonnier, writing to his brother who also served as a secretary when he was in town.

During the verbal battle between the devil and Marie-Julie, we see how the devil likes to set up his attacks against God’s holy Priests (and, also the faithful people).

We can study the devil’s tactics against our souls by looking at his attacks against holy Priests.

The devil hates Christ’s Priests above anyone.

And even in Marie-Julie’s time, the devil’s principal weapon was to create false scandals against holy chastity, using false witnesses:

“If you would, before something does not happen and that I do not want to tell you, if you would sign me a little thing.” [Footnote: No doubt it is about signing to confirm the false scandal which the Demon made run through Blain and Nantes, concerning relations between the stigmatized one [Marie-Julie] and Father David].

The aim of the devil in pinning this false accusation against Fr. David is to destroy his reputation and his position as a parish Priest, thus removing his influence from Marie-Julie’s life.

How does the devil tempt people to make false accusations against holy priests?

“I will transform your house into a beautiful palace.”

This temptation seeks to destroy a holy Priest, as well as Marie-Julie if she were to lie and sign a false accusation, and anybody who would believe the accusation and be scandalized as a result.

And holy Priests steal souls away from the devil, interceding for us before God, just as Jesus Christ did.

This is why the devil hates Roman Catholic Priests so much, calling them “wine drinkers” when he knows that a true Priest is able to re-enact Christ’s Sacrifice on the Cross in an unbloody manner, bringing untold graces upon the world to counteract and neutralize evil.

This source of salvific graces, the Priest, must be stopped, and so we see that the devil also thinks up all of the foul ways to destroy a Priest’s soul.

The attack seems to need to bring on multiple perceived “misfortunes” and then finish off the Priest’s defenses with a “surprise”:

“If I could make all of the misfortunes happen to him! If I could take him by surprise and make him become bad, this wine drinker…”

Has the devil succeeded in making God’s Priests bad?

Some Priests have certainly fallen and become bad, because we are all fighting the lusts of the flesh, but not most truly ordained priests. There have been communist and masonic infiltrations.

It is not as the masonic media and the false accusations would have us believe. Holy Mother Church will be vindicated in the near future.

The truth always comes out in the end!

But as we see in this ecstasy, Priests are truly the first target of the devil and his henchmen.

And devils do not require sleep!

Their aim is the holy Priest, the truly consecrated Priest, so that they can also reap the souls of the faithful along with his soul.

And yes, we have communist and masonic agents who have infested seminaries, parishes, religious communities, the Vatican City, and the visible role of the Papacy itself (antipopes).

But, like Marie-Julie, we must soldier on with the Saints and Angels in Heaven, who are our true friends, and the Blessed Mother of God as our dear Mother and winning General.

Remember, the devil is the little runt pig, the quequet.

His tactics are to weaken our resolve through self-pity. Then he hits us with a surprising blow, a big temptation to bring us down into sin.

Be on alert, and pray for the older true Priests who are faithful, and that those who have fallen may convert and become strong soldiers once again.

Let us show this mercy and also be diligent about ourselves, because the devil is always plotting for all of our souls.

This week's ecstasy also reveals that the devil has seven heads, going down to his feet:

"This villainous monster, this Quequet, has seven heads. He has some down to his feet, behind which there are long “pricks” like claws."

These seven heads are the seven main ways that he lures us into sins and these are the Seven Deadly Sins: anger, pride, lust, envy, gluttony, greed, and sloth (laziness).

So we must be careful what we thoughts we like to dwell on.

They should be pure and good thoughts. They should be about the triumph of the Immaculate Heart of Mary, the return of the French Monarch, the restoration of the Holy Father to Saint Peter's Chair in Rome, and us being triumphant, strong warriors against the devil's lures.

May we soon see the triumphant return of Holy Mother Church and Her holy Priests!

Speramus in Te, Domine! We hope in Thee, O Lord!