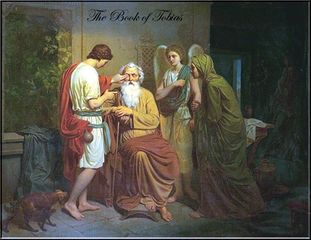 This painting shows Tobias having his vision restored by his son, under the direction of Saint Raphael the Archangel.

This week we review seven key prophecies given to Marie-Julie Jahenny by Heaven. They are taken from the book, Prophecies of La Fraudais, compiled by Fr. Pierre Roberdel.

“The second period is the Church invaded and the beginning of the terrible struggle in the Eternal City. That terrible war within the Eternal City will be flagging five months, without its consequences, sad unto death…” (p. 205).

(2) The Church breaks into two groups:

“They split apart, divided in two parties: the dignified and respectable party is composed of only a handful of true and steady fighters, while the other one consists of so dense a multitude that it would be impossible to number them… Hell on foot will have overthrown anything which causes one to live spiritually.” (p. 193)

(3) The True Popes are hidden:

“You [Marie-Julie Jahenny] will not see the end of the persecution. The one who is to replace him will not see either. The third is going to live a long time; but it is going to be difficult to find him amongst so many destructions.” (p. 54)

(4) We are now living in the time of satanic rule:

“Before the kingdom of resurrection and peace come, satan has to rule in full, as a sovereign. He will have dominion over all. When everything has been conquered, when he will have removed everything that might recall faith, blotted out all the holy temples, overthrown My image and My Cross, his ruling will not last for long; but he will reach that complete triumph; he will succeed through detestable procedures.” (p. 99)

(5)  The French Monarch and the Pope:

“God is hiding the one He is going to choose in order to save the Church and to rule over France, to withdraw the whole world from the domination of the devil, whose ruling is in its full swing at present times, whom God actually leaves to be the master.” (p. 40)

(6) The Holy See of the Cross, the Exiled Papacy, exists!

“Triumph will be magnificent on earth; magnificent will be the coming of the Exiled one [the French Monarch] to the See of the Cross [the Papacy in Exile]; magnificent, the triumph of My brave fighters.” (p. 203)

“See how much the work of the Apostles of the Cross is going to grow immense, since my Divine Son wants everything to be collected for His greater glory. He demands His children to give Him the whole work of their mind and of their hands.” (p. 284)

Reflection on these Seven Prophecies:

In less than a year, everyone around the world has been bombarded with so much to fear: a lethal plague which became pandemic, ravaging weather, an increase of violence in most countries, and rumours of World War 3.

How much we need Saint Raphael the Archangel to bring joy into our lives!

For it was Saint Raphael who said to the elder Tobias: "Joy be to thee always . . . . Be of good courage, thy cure from God is at hand."

Let us ask for the cure of billions of souls through the restoration of the Chair of Saint Peter to the exiled Holy Father, the true Pope, so that all the world may be given the grace to see the Truth just as the elder Tobias was cured of his blindness.

Let us ask Saint Raphael to be the travel companion of the French Monarch, as he makes his dangerous journey to take back the throne of France.

This feast day of Saint Raphael the Archangel could not have come at a better time!

Our daily meditation and prayers need to return to the Holy Father and Church in Exile, the French Monarch, and the prophesied Papal Restoration.

Our eternal souls depend on these daily prayers. We need the actual graces from Holy Sacraments. We need holy and true Priests whose prayers will be heard by God the Father.

We will only get to the end of this Divine Chastisement if we have the true Pope restored to the Chair of Saint Peter.

For it is from the Vicar of Christ that Christ's graces will flow once again. From the Chair of Saint Peter, He will be the light allowing souls to see, at last, the Truth!

And the French Monarch is the one prophesied to bring the Holy Father back to us.

Think of this: we have been in darkness since October 9, 1958, with the death of Pope Pius XII.