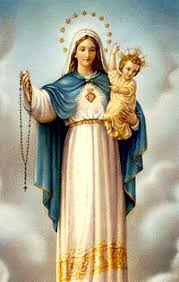 The flame of the Holy Ghost says:

“Religion of present time will be changed in its studies and institutions. Abominable laws will replace it and words so lethal that hearts will be corrupt, virtue will be extinguished and the good people blotted out. The whole population will suffer and Christian people reduced to naught. The enemies will report triumph and will be granted everything. They will be given preference over the best people; that is, over those who stand on God’s side, whose side is nevertheless on the victorious side.

“In several countries, Satan will be given public invocation, and the true God will be insulted. Fully in public, they will invoke Satan, the master of powers, the great chief, who will turn the laws from their right path into a frightful marching. The hour approaches when all clerics will be reached and fastened tightly, after a terrible manner.

“The enemies will pay heed to nothing, but keep on producing, from day to day, their wretched laws and those works which are leading to the slow coming day… slow, because of the prayers which have been offered and are still offered, by good Christians.

Good-seeking men, God’s defenders, will be crushed, this time, in their battling, just like the grain of dust under the foot of the passer-by. Henceforth, one should not expect to gain anything whatsoever in defence of good.

In several places of France, the enemies will fight among themselves, although they may be united in the same party, and have made those terrible agreements, which will lead us to the abyss.

God’s friends, says the Flame, do not expect any consolation… Day by day, evil will only proceed forward, to such an extent as its victory will cover the earth all over the extension. Strengthen your faith in the remembrance of the Saviour’s Passion.

The hostile powers will have the courage to utter horrible speeches against the Lord. They will carry their audacity to the extent of speaking openly:

“If the Church reports triumph and escapes the furies of this epoch, we are ready to swear that there is one God existing and powers above us.”

Other discourses will be circulated about Satan, in those papers across which the world runs its mortal eyes (newspapers). The reality of those words will soon reach the heart of God’s people.

Let us weep and lament, the Flame goes on: time is up when everything forecasts tears. Their laws open up the passageway leading to the great stage of the Revolution.

The enemies will discover the means – all the means – to send to exile the troops whom they call Peace Guardians. They will be confined to certain places where they are still to be found at present, and where they spent themselves for so long. That will be the last means for allowing everything to be delivered, in all freedom, to the terrible plunder. That word “liberty” will be yelled out throughout the whole of France, as it has been in the past, yet still louder.

Pray ! still one more effort! That endeavour will not check [not stop] the great decision. If that decision has not yet taken place, the Lord, and not those unfortunate people, has to be thanked for it. That effort in prayer will appease God’s Justice, prevent it from weighing heavy upon the just men who will escape amidst the fighting of the civil war.

That civil war will be terrible, above all at the Center (Paris) and in the South, and also in that big place, close to which God is standing, at present, the name of which represents strength (Lyon). The mighty ones of the earth will have between themselves hellish debates: their voices will claim on one side, claim on the opposite side. There will be no agreement between them, and Satan will stand on the middle way, with his visible signs.”

Do you recall the details of satan’s ruling when Jesus Christ underwent His cruel Passion and Crucifixion?

Christ was despised and mocked, as were His followers. He suffered cruel arrest and was scourged worse than a common criminal. After this, few recognized Him as a holy man, even fewer knew Him as their Messiah, God the Son.

In fact, His Apostles were hunted men, hiding for fear of their lives.

This was a time of satan’s ruling.

This week’s prophecy shows us the details of satan’s ruling today:

Our holy religion, instituted by God the Son, Jesus Christ Himself, has been “changed in its studies and institutions.”

“Abominable laws have replaced it” which deny absolute Truth, taught in our infallible Dogmas of the Faith.

If there is no absolute Truth, then there is no wrong, just a difference of opinions as to what is a valid lifestyle.

The result has been the loss of holiness in souls worldwide: “hearts will be corrupt, virtue will be extinguished…”

What follows? The taking away of everything from the good, as those who follow satan take full control:

“The enemies will report triumph and be granted everything. They will be given preference over the best people…”

What are some specific signs we are seeing?

“In several countries, satan will be given public invocation, and the true God will be insulted.” (New York City had a New Year’s Day enthronement to satan, and most recently, a statue of the demon baphomet has been sent to be enthroned in various American cities, such as the capitol building in Arkansas).

As civil wars break out, the “enemies will … send into exile the troops whom they call Peace Guardians.”

And where are the priests? They have been “reached and fastened tightly after a terrible manner.” (Silenced from fear of impoverishing lawsuits, they remain, like the Apostles, hidden and scared to speak out. The media frenzy from scandals of impurity have tainted all Priests alike, so that they are all universally distrusted/hated. Yes, satan has worked hard for this particular triumph.)

The Church is going through a very long Passion and Crucifixion.

The timing has been excruciatingly slow: first, the Exile of the Papacy with the removal of Pope Gregory XVII, on October 26, 1958, [see www.thepopeinred.com]; next, the invalidating of all sacraments [1960’s to early 1970’s]; and finally, the dying off of the elderly true Priests and Prelates.

Most of Christ's true Apostles are left to offer their silent sufferings from common nursing homes for both men and women patients -- a situation that is an affront their Priestly holy vow of celibacy!

Who else helps Christ to carry His Cross?

Like Simon, of Cyrene, who was just a layman, we can take up the Cross for Christ’s fallen (Exiled) Church.

How do we carry this burden of the one true Faith among even family who torment us or blot us out of their lives?

How do we carry this burden if, in refusing the satanic vaccines, we are forced into poverty or imprisonment into camps?

This is what the Holy Ghost advises us:

“Strengthen your faith in the remembrance of the Saviour’s Passion.”

Without the holy Sacraments, the only way to strengthen our souls is by daily prayers.

The Holy Rosary, yes, all 15 decades, take us through the Saviour’s Passion.

This is not the time to wait for Tuesdays and Fridays to meditate on Christ's Crucifixion.

The Holy Rosary is our armour, our strongest weapon, our healing medicine should we be brought down.

And there is one last special thing to remember about our Saviour’s Passion: there was no complaint uttered; not by Simon of Cyrene, nor by Jesus Christ.

And neither of them was treated justly, so we should not expect justice.

After all, satan is a liar, so he is never just! And neither are his followers, whose souls are deadened by sins. These followers will bring us pain and suffering.

By not complaining, our lives will become pure intercessory prayers for others, and especially for those family members who are under the influence of satan’s ruling.

If we stand on God’s side, prayerful, then we stand on victory’s side, and we will bring others with us!

A Note about Earthquake Activity and the asteroid 2018VP1:  If you looked upon the usgs website, which tracks earthquakes worldwide, you will have noted that we got to as many as 42 earthquakes in one 24-hour period during the close passing of this asteroid. Currently, there have been 38 earthquakes around the world in the last hour. [See https://earthquake.usgs.gov ].

We must be vigilant and prepare for "earthquakes in diverse places" [Matthew 24:7].

However, the 4 hours of darkness did not occur in France or elsewhere during the passing of asteroid 2018VP1, so we still await this warning that will announce the promised 3 Days of Darkness.