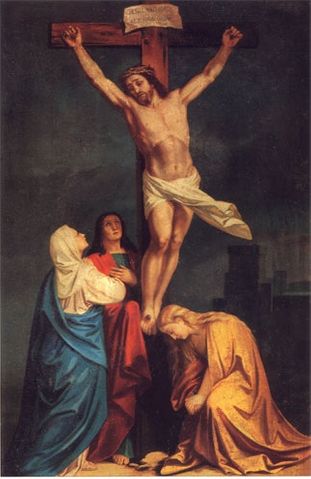 “My children,” says the Blessed Virgin Mary, “when crime will have reached its highest peak, when the dreadful enemy’s subjects will resume their position at the Center, then my Son’s terror and Hand will already be touching upon the walls so guilty – although some good souls are to be found in there; but they will be victims of crimes and iniquities.

“My children, do you know what the number is of those who will escape that infernal, deadly war? I dare not tell you.

“My children, all Christians, not slipping away to hide in secret places, those who will prefer to soak the ground with their own blood rather than leaving for a country enjoying peace… the amount of those who will be protected is written down at the Eternal Throne. When I look at that figure, I am left disconsolate and my Heart is pierced with a thousand swords.

“My children, not one hundred will escape, no, not even a hundred amidst that immeasurably guilty city… Number them by twelve less, and you will reach the true figure. Never was a sorrow greater for me.

“Men will achieve that the just Wrath of my Son will rise to its ultimate limits. While those unfortunate men will cast all my people into the tomb, then the world will be found under the avenging thunder of Heaven.

“My children work on Sundays! Soon, only a few Christians will be seen attending services! Confessionals will be left empty… My children, blasphemies are establishing Hell on Earth. I feel sorry for the clergy. I see the spirit growing weaker, day after day, in an increasing portion of the priests. A great number of pastors are no longer in the disposition, as were several among our priests, of dying in the loftiness of their holy ministry.”

The title of this prophecy, Refugees from Paris, reminds us of the recent exodus out of Paris which resulted in massive traffic jams.

According to the masonic press, Parisians were fleeing Paris so as to avoid another COVID-19 full lockdown.

Well, the refugees in this prophecy are leaving Paris because of a coming war.

It is an “infernal, deadly war”.

In Paris, only 88 Christians will be protected and manage to escape:

“not one hundred will escape, no, not even a hundred amidst that immeasurably guilty city… Number them by twelve less, and you will reach the true figure.”

What kind of war is it?

It is a spiritual war:

“My children work on Sundays!” –mankind turns from contemplating God and loving Him to placing money in first place in their hearts.

“Soon, only a few Christians will be seen attending services!” (and this was prophesied in 1881, so piety was deadened in less than 100 years—incredible!)

“Confessionals will be left empty” –If there is no Heaven [remember John Lennon’s song], then there is no God, so sin is not real, and thus, there is no need to go to confession to be cleansed from one’s sins.

“[B]lasphemies are establishing Hell on Earth.”—Christ our Lord is crowned with thorns at every moment of every day, even by children! His kingship is despised and utterly rejected, and even the young innocents repeat the blasphemies that they hear all around them!

And the souls of priests, whose ministry is to the health of souls, are also attacked in this spiritual war:

“I see the spirit growing weaker, day after day, in an increasing portion of the priests.”

Without holy priests and the holy Sacraments, how is it that anyone has the Roman Catholic Faith today?!

It must surely be a miracle of Christ’s Precious Blood, shed on His Holy Cross, that some of us still love Him, still cling to Him nailed on that Cross, still beg Him daily to never let us go!

So let us search this prophecy for an understanding of “those who will escape that infernal, deadly war”.

It is interesting that those who escape dying in this spiritual world war:

1)    Are “slipping away to hide in secret places”: they do not stay with the soul-killing novus ordo. They pray daily, at home.

2)    They prefer to “[leave] for a country enjoying peace”: they look for true priests to give them sound doctrine and the true Holy Sacraments. Their chapels are independent of the false authority of the enemy. They take care of their true priests, until they die.

And yes, we will be persecuted by family members, communities, employers, governments.

Because the infernal enemy wants to remove the Holy Roman Catholic Church from this world entirely:

“While those unfortunate men will cast all my people into the tomb, then the world will be found under the avenging thunder of Heaven.”

But the enemy will not succeed in annihilating us:

Christ Himself will come to save us with the fire from Heaven, the 3 Days of Darkness, that “avenging thunder of Heaven.”

And the French Monarch will govern as a Roman Catholic monarch.

He will place the true Holy Father on the Chair of Saint Peter once again.

The light of the Vicar of Christ will bring conversions worldwide!