A PROMISE OF OLD 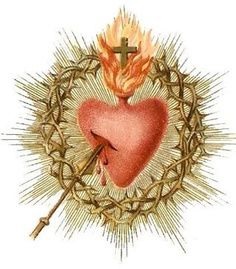 “My children, My Divine Heart holds the privilege of all graces. There lies My Triumph. But, before I give you that Triumph, I want to put you to the test. Many evils I will send unto you: you shall see My Justice falling down upon earth; in the sky you shall also see bright forewarning signs appearing.

“I had promised that, perhaps, I might have delayed for two hundred years, perhaps still more. If My people had been docile, I would have granted triumph sooner… It has not been docile: I have kept waiting. But… triumph will take place. My victim, keep that in your mind.”

He goes on saying:

“The victim of My Sacred Heart has been unable to pass along all of My revelations. This is the reason why, at present, I want to forewarn My people, so that they may be prepared when the hour of My justice is up.

“I had promised France’s triumph would take place after great chastisement; which revelation has not been delivered.

“Several saintly souls had been given the announcement that, before France’s triumph, a great rebellion would take place among all My children. They will attempt to debase everything on earth which is worthy of respect: but that will be in vain.”

“Guilty France, can you not see the tomb which lies open, in which to pile up the victims of crime?... Do you not see the fatal hour, which is growing? That will be the devil’s hour. He is going to throw at My Face the poisoned breath of his anger.

“My children, I forewarn you: satan will quench his rage which is so much the greater, as his own shall be conquered. I want to humiliate My people: it paid no heed to My words. Afterwards, I will grant complete victory.

“Here comes the time when the white Lily and the white banner shall be trampled under foot. This will be only for a time. That white banner will be implanted in France, and its enemies will be bound to live under its domination.”

Reflections on this Prophecy:

In this prophecy we learn about the power of wounds inflicted upon us by the Holy Will of God.

From this prophecy, we learn that Christ’s Sacred Heart “holds the privilege of all graces” as a result of Its Wound from the spear of the soldier.

Can we say that wounds bring graces? Yes! (The soldier converted immediately).

Can we offer up the wounds inflicted upon us for the salvation of the very people who cause them? Yes!

To do so would be most pleasing to God, who has allowed these wounds! Do not think that they are a bad thing because they contain malice from the devil!

See the opportunity instead!

Remember what Christ says in this prophecy: “There [in My wound] lies My Triumph.”

Are you ready to receive the sufferings which will come to you?

Christ tells you that He will send you many sufferings:

“Many evils I will send unto you: you shall see My Justice falling down upon earth; in the sky you shall also see bright forewarning signs appearing.”

Are you ready to suffer even more from others?

Even the Saints of God have suffered at the hands of their superiors; yes, even Saint Margaret Mary was blocked from doing as Christ our Lord asked of her:

“The victim of My Sacred Heart has been unable to pass along all of My revelations.”

The devil gets persons of bad will, those who are unhappy because they do not know and love Jesus Christ, to bring sufferings.

The devil's rage is that he cannot win against God Almighty:

“satan will quench his rage which is so much the greater, as his own [those who follow him] shall be conquered.”

And we must not fool ourselves. When Christ speaks to France, He is speaking to the masonic men worldwide who are bringing in the one-world government of the Antichrist:

“Guilty France, can you not see the tomb which lies open, in which to pile up the victims of crime?”

The governments under the ruling of the Antichrist will try to block the French Monarch. They will bring him much suffering:

“Here comes the time when the white Lily and the white banner shall be trampled under foot.”

But this is “only for a time.”

Let’s offer to suffer our wounds (present and in the future) for this Triumph: the Triumph of Christ winning the poor sinners who make victims of us.

Will you love with the Love of the Sacred Heart of Jesus which converted that soldier?