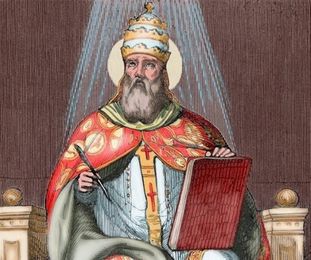 “... The heart of the Church, continues Saint Michael, is but a bleeding wound. Today crime is taken right up to the foot of the alt...

--I have understood, Holy Archangel, but I will not speak of it.

--The Lord wishes it.

--I will not say it, Saint Michael.

--I pass since you are afraid to sin.

--Yes, I am afraid to be wanting in charity.

--I speak of the order of the Lord.

--I will not go back, Saint Michael, if you speak in this way.

--Dear friends of God, the Lord is offended by those who should serve Him.

--Do not say that, Saint Michael, I will not repeat it.

--The friends of God are warned; they only have to wait in silence and in their generous faith.

“Be at peace” She says, “above all the words of Saint Michael, it is my Dear Son who has dictated them.”

--Good Mother, I am very quiet about it.

“Listen, a word for you. Satan boasts that he will crush you under the weight of persecution and of horrible treatment. He congratulates himself and he hopes to take revenge on your hope.

--Saint Michael, tell him that he is very foolish if he thinks it. He is again more stupid than foolish. Tell him this from me, and also that I am not afraid of him.

--He also says:  I would very much like to take at once the friends of the Cross.

--Tell him that he boasts too quickly, and that he will fail in his dirty stupidity. Tell him that.

--The means to make him to fail, is to not fear him and to laugh at him.

--An “evasion” of the friends of the Cross by a very loud noise with which he will make them leave.

--Saint Michael, tell him that he has his paws turned backwards, and that he is not capable of making my friends leave.

--He says that he will declare war against you, on you, on the victims, and on the friends of the Cross.

--Tell him that, when there will only be this Quequet [quequet = little pig] to make war against us, his soldiers will be nothing more than dust.

--Tell him for me, Saint Michael, and for my friends, that he is unable to make any other sort of thing to come out, because he is full of filth... and that filth is his food.

--He says that he wants to turn upside down the love of the Cross in all hearts, but he admits that he is on the point of being beaten. That is why his chaos will not be missed.

--Courage in the middle of all that. I have warned you.

--Your enemies want to redouble their violence again.

--I have no enemies.

--In accordance with charity, I have none.

--When the priest who comes here is going to return, with his fatal dispositions, loaded with an authority by an authority without authority, do not trust him. Keep the biggest reserve.

--It is all a sudden attack that is being prepared and they are enjoying each other. All of you, you keep a deep silence! It is the most terrible times, it is the fury; but their efforts are very far from being on the way of triumph. The fights are close to all odds. You must suffer again, lift your body to the cross and your soul to the chalice of Jesus Christ.

--I am ready. I do not refuse to suffer. Only, Saint Michael, ask for me of Our Lord the grace to be able to endure it well.

--If you had seen all of the mountains of sufferings of which you had to be in charge, would you have consented to so much suffering?

--Yes, Saint Michael, but I prefer not to have seen them. I throw myself blindly in the Holy Will of my Love.

--If you knew what you carry on your shoulders and everywhere!

--All of this excites a holy compassion in my soul for those who bloom me. To be blooming from flowers of persecution, how beautiful!

--The Lord gives, when he wishes, to all these flowers, a good odour. I stop myself and I repeat:  courage to all!

The Holy Virgin says in her turn:

“My children, I will protect you... I will return often to warn you again and to console you because you need it.”

--Oh!  Good Mother, we do not know anymore what is consolation here below!

--It is in Heaven that it will be enjoyed. Courage, my children... My Son protects you because He has need of you.

--My Good Mother, I beg you – I am more bold with you than with Saint Michael – I beg you, tell me, amidst all of my pains, if I do that which the Good God desires.

--Reassure yourself, console yourself. My Son has never been more glorified, more than today, by your invisible pains.

--Good Mother, the sufferings are all interior.

--I will relieve them well, but, since my Son sends me to add one last flower to your crown, I leave you your pains.

--It is sweet for me to suffer when I have a word to strengthen me.

--Courage!  My children, I leave you.

“I will come again.”

He shows his sword and says:

“This sword will be plunged in the blood of the infamous. I am the exterminator Angel.”

Glory be to the Father...

The devil always seeks to deceive, to trap us with lies.

How does he trap us? With a pretence of goodness, of holiness. His followers seem to be doing good, and urge us to join them.

Remember Christ’s warning: “For there shall arise false Christs and false prophets, and shall show great signs and wonders, insomuch as to deceive (if possible) even the elect.” (Matt. 24:24)

Today, December 11, is the feast day of Pope Saint Damasus, who sat on the Chair of Saint Peter in 366. The Epistle for his mass says He was “the Holy Pontiff, innocent without stain, higher than the heavens.”

By comparison, let us consider the recent action of the current anti-pope francis, in using the Feast Day of the Immaculate Conception to put focus instead on Saint Joseph, by calling December 8, 2020 to December 8, 2021 the “year of Saint Joseph.”

There are two things to consider:

Bergoglio seems to be doing a good thing, calling Roman Catholics around the world to dedicate their prayers to Saint Joseph from December 8, 2020 to December 8, 2021.

What makes the mind uneasy is the taking away of the importance of the Feast Day of the Immaculate Conception for two years in a row.

Why would a mason and Satanist want people to pray to Saint Joseph? What motives can he have?

Certainly, his intentions cannot be pure, because he has not declared the truth about himself. He seems to be the Pope, but in reality, he remains a pretender anti-pope, leading his followers away from Christ’s Holy Church.

And truly, the demons HATE the Blessed Virgin Mary because the devil HATES her. She, a woman, crushed his head at the time of Her Immaculate Conception.

How the devil must HATE the great feast day of the Immaculate Conception!

By taking away the focus from the Blessed Virgin Mary’s Immaculate Conception, is Bergoglio trying to block our Holy Mother’s radiant presence and Her powerful interception against the forces of evil for both the years 2021 and 2022?

Saint Alphonsus Liguori, in the Glories of Mary, says that we Catholics call upon Mary as our Mother ever more frequently throughout our lives, because she is our Spiritual Mother and the Mother of our salvation.

And why use Saint Joseph, Her holy spouse?

Has this happened before?

Yes, anti-pope Roncalli (john 23), put Saint Joseph into the Canon of the Mass, right there with the holy martyrs, as a sign of the diabolical changes (nullification) which would remove the Holy Sacrifice from altars around the world.

Frankly, it could be a new and widespread culling of souls into hell.

Consider that a mason is calling people around the world to pray with him; that is, to pray to the devil.

This in itself will drag countless souls towards the eternal abyss, through committing a mortal sin.

Why? It is a mortal sin to pray with non-Catholics, for they follow the devil.

But praying to Saint Joseph is not a bad thing of itself, so what are we to do?

But Catholics are not to pray with those outside the Church, for they follow the devil.

It is simple: we may not join in this masonic “year of Saint Joseph”. We may not pray with the anti-pope and mason Borgoglio.

However, our devotion to Saint Joseph, our trust in him, should never falter, and so we joyfully pray to him in all of our necessities.

We need to also pray that those under the spell of the satanic pretenders may be freed from their dark enslavement.

Happy Feast Day of Our Lady of Guadalupe, Patroness of the Americas, on December 12!

LINKS:   LA SALETTE   St. Michael Prayer   The See of the Cross   3 Days Darkness   The Sun   The Warnings   After the 3 Days   Getting to Brittany

The Patron Saint of The United States is The Immaculate Conception.