THE HOUR OF THE ANNOUNCEMENT 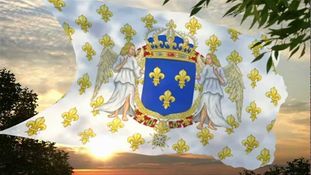 Alone with Jesus, I gaze with the eyes of my soul on the upper part of His written sheet. His adorable voice tells me:

“Now, follow along all those words which I engraved from My thought.”

“On the day appointed for My writings to be sent over to My servants and to My victims, to notify them of My hour and the hour for the miracle, following that call nothing will hold them back.

“I will protect and preserve those who will be bound to wait for a little while before they find a refuge under the Divine Tree of the Cross.

“The hour will be sent to the whole family of the Cross whose destiny it is to be protected. That hour will take place before the roads on earth are closed, before the enemy has embarked over the whole extension of France to overthrow it and cause it to perish.”

“I will give my beloved servants and victims the true description of the cross they will have to carry along. They will live after the manner of the missionaries of My divine word, the Fathers of the Cross.

“It is My desire that My servants, maid-servants, and even the little children be able to clothe themselves with a cross. Such a cross will be smaller, bearing in its centre something looking like a little white flame. Which flame will point out that they are sons and daughters of light.”

“The inescapable evil is coming forth. Soon the whole earth will stand only under the shower of the terrible chastisements of My Justice. Good will be in the tomb and evil will arise to the summit of mountains to testify of its triumph.”

This week’s prophecy speaks of a “shower of the terrible chastisements” to fall upon this world which is DIFFERENT from the 3 Days of Darkness.

The 3 Days of Darkness will end evil, removing evil from the face of the earth.

This “shower” is different because it brings evil upon us, raining down upon us, non-stop.

In fact, it is called: “The inescapable evil”.

This means that we are powerless to stop it, despite our best efforts, because it is inescapable.

We with good hearts and wills have seen this happen with the takeover of the American government (and thus the country) with fraudulent elections.

Video proofs have been brought to bear, and several eyewitness testimonies, but nothing has been done about it. Tragically, the higher courts have been as silent as graves.

Surely, this is the prophesied Announcement.

This takeover affects all countries that the United States of America has been protecting from Communism.

The whole of the free world is now no longer free. Countries will surely be taken over, if they are not already.

Case in point: Chinese troops have been on Canadian soil training alongside Canadian troops, and this in a country that is unable to defend itself against invasion. Canada is already invaded!

Perhaps this takeover of the U.S.A. is what makes us sit up and realize that we have now entered into this time of “the inescapable evil”.

How will we recognize it?

Evil laws will be enacted quickly, in all countries: “nothing will hold them back.”

It will be a satanic free-for-all and life as we know it will become a continuous suffering:

“Good will be in the tomb and evil will arise to the summit of mountains to testify of its triumph.”

We, God’s children, will have our prayer life to sustain us.

And those who do not cultivate a daily prayer life will become victims to the evil which seeks to oppress so as to suffocate the Faith.

After this suffering, there will be the announcement of “the hour for the miracle”.

The announcement of “the miracle” will console us, bringing hope into tired and frightened hearts!

Our littleness, our staying at home to pray, will be protected:

“I will protect and preserve those who will be bound to wait for a little while before they find a refuge under the Divine Tree of the Cross.”

And now it becomes exciting – we must dare to hope! – we who are waiting for the restoration of the Papacy to the Chair of Saint Peter, we who are waiting for the chance to receive sacramental graces, we who long to have our sins truly forgiven by holy true Priests who are in communion with the exiled Papacy; we who languish, waiting to receive Holy Communion before we leave this earth…

Is this promised “refuge under the Divine Tree of the Cross” the glorious resurrection of Holy Mother Church?

Yes, it has to be, for Christ is making us this promise Himself!

We must understand, and we must be always certain of Christ’s love for us:

The French Monarch will put the true Pope on the Chair of Saint Peter once again!

We will have a Hierarchy again: true bishops and true Priests.

This is the “refuge under the Divine Tree of the Cross”! The Crucifixion and Death of Christ brought mankind the Holy Ghost and then the birth of Holy Mother Church through the preaching of the Apostles.

As it was in the beginning, so it will be in the end!

And this joyous announcement, made known to the Faithful, will be “before the roads on earth are closed, before the enemy has embarked over the whole extension of France to overthrow it and cause it to perish.” [The meaning seems to point to France also becoming Communist].

We know from recent worldwide lockdowns how planes can be grounded and borders closed. This also happens with war.

Why will the announcement of the freedom of Holy Mother Church happen before planes stop flying and borders are closed?

“The hour will be sent to the whole family of the Cross [the little flock of the Faithful around the world] whose destiny it is to be protected.”

Soon, soon, we shall be hearing of the French Monarch, God’s answer to our fervent daily prayers!

Soon, soon, we shall see “the Fathers of the Cross” who will have the Papal Mandate to travel as missionaries, to preach the Truth and give us God’s own Holy Sacraments!