FISSURES AND SMOKE... OF SATAN 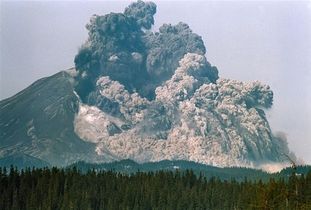 God’s love for man is endless; His mercy is infinite… but His Justice is perfect. He will have warned the world long enough. When crimes and blasphemies have accumulated like a mountain, whose bubbling sides split in order to throw their smoke far away, so will the Justice of God suddenly knock it down.

Above the Justice of the Lord, I see, perfectly written:

“At the big moment, I will not warn ; My voice will not be heard in the universe.; I warned long in advance; I showed all the signs; I unveiled the figures of sorrow, as well as those of hope.”

As soon as I read these words, I see the Divine Justice fall down, suddenly and with hurry, after love and mercy. This flame of Justice splits them and tears them apart. I understand that never before will the Lord have been more fatally wounded.

When the Justice of God will finally descend and burst even on our mortal soil, It will allow all open eyes to read:

“I warned long in advance. When the needle of time [the clock’s hand] will be on the marked hour, My word will be silent; I will no longer announce the coming of My Justice. At this sign, prepare your eyes to contemplate this visible flame (of the chastisement) which everyone will be able to see, but which not all will be able to understand. He will make the most infamous profaners bow their heads; He will make their heads to be raised up to the righteous.”

Jesus would hope to see these ungrateful hearts be touched by His mercy on the day of the terror; but far from being touched, these guilty ones become more irritated and blacken their lips with the paint of blasphemy.

The Lord has waited up to the day before the day when His enemies declared war on Him. For God and His Heaven, it is a desperate expectation of pain. By extending, out of kindness and mercy, He waited until we had started on the road of return to His Love. But, on the contrary, I see that the number of those who will not participate in forgiveness grows each day. Each day, new enemies, who are desperate for human revenge, declare war on God.

Jesus, without complaining, has left an entire liberty to the evil which has immensely extended itself. With sadness, Jesus saw that the way of good became very narrow. Up to the very end, He has not diminished in His power, His graces, His benefits. Even up to this day1 He has given the fullness of His kindness; [Footnote 1:  One must judge these texts from the perspective of actual times, rather than those of the 1880’s]; He does not moderate the grandeur of His graces for His friends; but He absolutely removes all of His gifts from those who revolt against Him.

That which boils at the interior depths of souls is more infamous than the outer harvest which now seems visible. The appearance of this frightful boiling, still buried on the inside, cannot wait to show itself as a movement not long in duration, but of a great magnitude over the earth. From their first demonstration throughout the entire kingdom, the enemies of God, marching like soldiers, will agree to decide on their counsels, will follow all orders, will bend the knee to all commandments.

I see an enormous mountain smoking from all sides (the mountain symbolizes evil); the slit, from where exits thick smoke, announces that the loss outside already exists. This smoke expands itself from all sides and on all points.

This mountain throws its smoke in abundance from our coast, up to a certain [infernal] magnitude, then vanishes and dissipates without leaving a trace. The smoke, turned in our direction, stops before this granite cross, delicately sculpted, where there was a question regarding past ecstasies, and which is along the border of Brittany and the other land.2  [Footnote 2:  the Cross of the Three Provinces, in Boussay, at the limit of Brittany and Vendee, next to Anjou].

This mountain is that of all hearts of the enemies of God. It contains an inner evil that is only waiting for its time to break out in irreparable vengeance: a mountain of the enemies of God; a mountain of perverted minds. Already, they throw out their cries of joy, since this smoke passes through imperceptible slits. But it is on the day of the opening of this marching, that this smoke of evil will spread, smoke of iniquity, of crimes, and of horrible scandals.

This is how God lets us see those hearts so eager to feed themselves on evil, those lost spirits in the abyss of crimes and all which can cause grief.

This is the whole of the revelation of the word of God.