THE ECLIPSE OF THE WORKS OF GOD 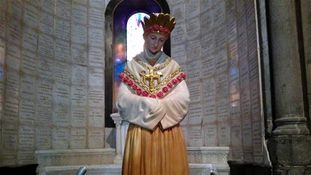 The Faith still lives today in the lustre of its beauty. The reign of impiety will be so dreadful that God, in His goodness, works with an all-Divine force to maintain the holy oil in the lamp of our hearts. This lamp of Faith and of courage will be most necessary.

How many times those on the side of evil liberty will impose denial of the Lord, of Faith in His existence, and denial of the Church!

God labours in His works: they have become for Him the way in which He makes His Word rain down… I see that many of these works will be destroyed, but not to their last root. This one will stay in hearts. During this dark time, all of this work that I would call human, although it is divine since God works there, will have an end.

[But] God will not have an end. Even if there is an apparent suspension, God’s work will not be suspended. All of the works of God will re-bloom after the downfall, this downfall that I see present, but that will not be the last, because there is another one: that [deluge] which will put an end to all the earth and all the world [of mankind].

Marie-Julie, writes Mrs. Gregoire, sees, in the sun, restlessness against the works of God… She sees that these works will become suspended, and that the places visited by the Divine Presence will be turned into places of scandal. Blasphemy will reign there; frightful things will be decided there…

She sees that, during a time of ten to eleven months, one will not speak anymore of these works. Christian souls will speak among themselves with pain of the profanations of the places visited by Our Lord, into places of horror.

There will be a restlessness from Hell against devotion to the Sacred Heart. This devotion will weaken when men will triumph willingly.

Reflection on these prophecies:

Today we are truly living through 62 years of the “reign of impiety”. Without the Pope on the Chair of Saint Peter, we have no access to men ordained into the Holy Priesthood, we have no Holy Sacraments.

Therefore, how glad we are to know that God Himself works to keep up “the holy oil in the lamp of our hearts” since “[t]his lamp of Faith and of courage [is] most necessary.”

This judeo-masonic world already imposes the “denial of the Lord, of Faith in His existence, and denial of the Church!”

When a truly ordained priest climbed up the three steps in front of the altar to offer up the Holy Sacrifice of the Mass, this was “the mountain of Calvary climbed, to make the Lamb without stain come down from Heaven each morning.”

But, as Our Lady warned us in LaSalette, many priests became cesspools of impurity.

The result was that their sacrifices become blasphemies against God Himself.

As Marie-Julie says: “I see this mountain climbed by the most defiled of sacrileges. She [the Church] will become the mountain of sacrilege.”

This has to be the reason why God allowed the sacrament of Holy Orders to be removed (nullified) once the Chair of Saint Peter, and thus, His Church, was defiled by the presence of the anti-popes.

This takeover has been the denial of Truth itself!

Many of God’s divine “works will be destroyed” (for example, the prophecy of Our Lady of LaSalette was suppressed in its time) but God still comes to our hearts, through this one work, the prophecies given to Marie-Julie Jahenny, so that “[t]his one will stay in hearts.”

For the survivors of the takeover of 1958 who know and love the Holy Roman Catholic Church, “there is an apparent suspension” of God’s holy works.

But Christ reassures us that His holy works “will re-bloom after the downfall”.

In the short prophecy which follows the first, Mrs. Gregoire, who is a faithful friend and volunteer secretary for God’s messages through Marie-Julie, tells us that Marie-Julie sees that “the places visited by the Divine Presence will be turned into places of scandal. Blasphemy will reign there; frightful things will be decided there…”

If you look at the photo attached to this prophecy, you will see the inside of the church built over the apparition site of Our Lady of LaSalette, in France.

Two summers ago, the editor of this blog visited this holy site and experienced the profanation of this once holy church, where the holy sacrifice of the mass took place every day.

There was a novus ordo revolutionary playing awful music on the organ so loudly that it was impossible to pray inside the church with the awful blast resounding. He seemed deliriously happy to be destroying the peace and quiet that should have reigned there.

The church is a museum, really, and no longer a church. From the photo you can see the horror of Our Lady’s statue placed in greater prominence than the sanctuary itself!

It is no wonder that “Christian souls will speak among themselves with pain of the profanations of the places visited by Our Lord into places of horror.”

And yes, we are also forewarned that “[t]here will be a restlessness from Hell against devotion to the Sacred Heart.”

Devotion to the Sacred Heart will be an important last refuge in the sufferings to come, so we can expect even more attacks to remove all images and all mention of the Sacred Heart from the minds and hearts of mankind.

Well, thanks to the Sacred Heart, we stand firm with the “the holy oil in the lamp of our hearts”.

Deo gratias! Sacred Heart of Jesus, have mercy on us.