PRODIGIES OF THE CROSS 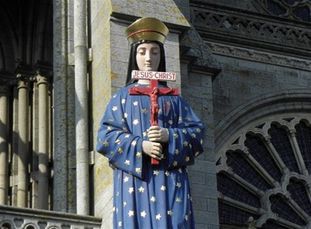 The first part of this ecstasy has already appeared in the book “Colloques du Ciel avec Marie-Julie Jahenny”, page 177, under the title: THE TWO UNIONS.

The second part, which we quote here, appears to us to be above all symbolic. It deals with the prodigy of the Cross which separates itself into three parts, each having the form of a cross. It is about a triple action of the same and only Cross of Christ: in opposition to the fury of Hell, to bring God back to Earth, to protect faithful priests in the celebration of the Holy Mysteries.

… I see, in the sun, that a dazzling prodigy is kept for our France, at the strongest infernal attack, while the terror will rip up that which is the happiness of a Christian. This prodigy will act by the power of the Cross.

At the moment when Hell will unleash itself, at that moment and in the midst of our homeland, it will be elevated before the enemies, in front of Satan’s army, a very simple wooden Cross, carrying the Son of God tied to it.

I see that the first part of this miraculous Cross will take a round shape with arms of equal length.1(Footnote 1: A type of Greek cross used by the Russian Orthodox). Above it, a chalice from where escape some drops of Blood which make it red.

At this moment, the just, drowned in bitterness, hear the words which are sung before the elevation of the Host in the hands of the priest: holy, holy, holy is the Lord God of armies. These words will be heard by a multitude of the just. This touching spectacle will have as its goal to bring souls back to God.

The second part will form a Cross such as we will know it by its entire form. It will carry the Divine Crucified turned towards the earth.

The third miraculous part is kept for the time when the Holy Sacrifice of the altar will be suspended. So the holy tabernacle will be deserted. If the ministers of the Lord, in distress and agonies ask of this third piece a place of protection in which to celebrate the august mysteries, there will be a light in the soul of the Priests to guide them to a protected place.

I see that this marvelous effect will win some souls to God, but they will be very few in number. Souls, for the greater part, will become irritated before this act of grace, which shows that Our Lord pursues them.

I see that charity and delicacy will not be whole. The enemy throws his evil grain: jealousy. It greatly displeases the Lord, and delays great things. True virtue shuts itself up in the case of humility. Perfect virtue should always conserve its sweetness and always forgive that which appears a fault on the part of our brothers.

This Cross  which splits into three parts seems to indicate three separate periods of persecution:

The first period of the power of the Cross has drops of the Precious Blood falling upon a Greek cross, which is Russian Orthodox. This seems to point to the conversion of Russia.

There are no spoken words for Marie-Julie because throughout these three periods of time we are a Papacy and a Church in Exile. Holy Mother Church has been silenced.

The photo for this week's prophecy is of Our Lady of Pontmain, when she appeared in a dark starry winter's sky in utter silence, holding before her a Crucifix which was entirely red, both the Cross and the Corpus.

Red can be Communism, yes, but in this prophecy we see that the Precious Blood falls from the chalice to redden the Cross, making this is an image of the grace of conversion.

The second part remains a mystery. We are only told one thing: that "the Divine Crucified [is] turned towards the earth."

Is Christ's Passion to be the cause of massive conversions in times still to come? Certainly Christ forgave His persecutors in the midst of His greatest suffering while crucified... We have to see His Love and where His gaze is turning.

Marie-Julie tells us: "... the Holy Sacrifice of the altar will be suspended. So the holy tabernacle will be deserted."

Can she be any clearer? There is no Transubstantiation taking place in the supposedly Catholic churches. The devil is in charge there.

It is the monstrosity of the deceptions of the novus ordo false sacraments.

The truly ordained Priests who are Faithful to God are underground, living hidden lives.

They are much older now, but they continue to offer up the Holy Sacrifice of the Mass and the other sacraments which they may lawfully give to the Faithful.

Marie-Julie says: "I see that this marvelous effect will win some souls to God, but they will be very few in number."

Yet even in these protected places, the devil seeks whom he may devour. He uses jealousy, which "delays great things."

What great things have been delayed by jealousy?

For one, the united front of Faithful Roman Catholics loudly abhoring the evil things.

For another, the coming of the French Monarch and the Papal Restoration, perhaps.

This is a hard time, a time when "charity and delicacy [are not] whole."

Our friends will hurt us...

We must, however, be above our human frailties:

"Perfect virtue should always conserve its sweetness and always forgive that which appears a fault on the part of our brothers."